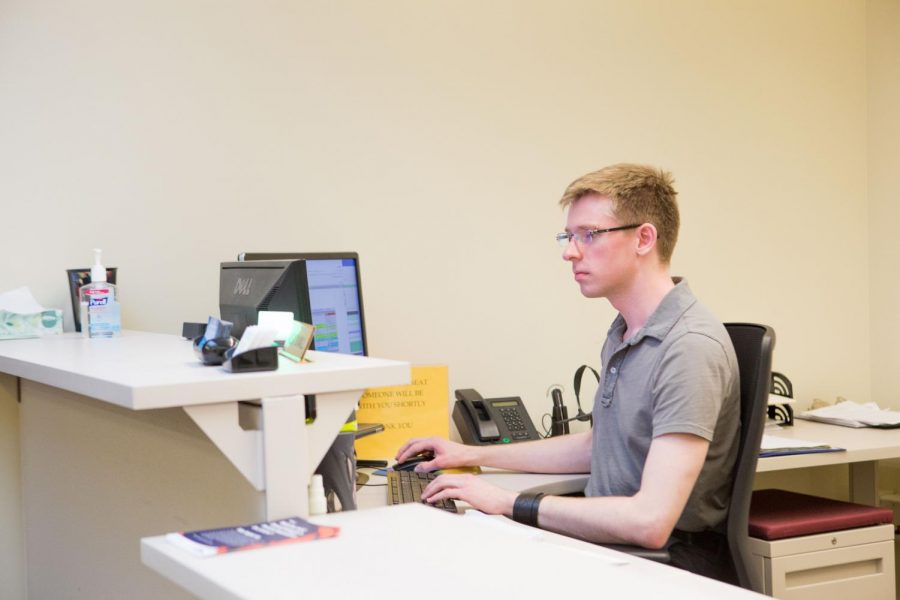 Alex Duvall works as a receptionist at the Campus Center for Advising and Academic Services on Wright Street, where students in the Division of General Studies seek advising. DGS offers a tool to help students narrow down different majors.

With over 150 majors offered at the University, the process of narrowing one option can seem daunting. To help make the process easier for students, a team of academic advisers in the Department of General Studies have created a new tool called the exploration pathways.

“I think (exploration pathways) help students see things from a different perspective and the main point being in making connections across colleges with the discipline students might be interested in,” said Daniel Turner, director of DGS.

Alexandria Kim, freshman in DGS, said in an email how she was discouraged during her first semester trying to figure out which major would best fit her interests. After looking at the seven exploration pathways, she believes this tool will help her narrow what major she wants to pursue.

“The (exploration) pathways are helpful because there are so many majors UIUC has to offer. I like how it is grouped and gives an idea on what major would be the best fitting if someone enjoys helping people,” Kim said.

One example Turner gave on how this cross-departmental perspective could help students was about a former DGS student who knew he wanted to become an astronaut. The most obvious major that corresponds to that path was aerospace, which is in the College of Engineering.

However, through cross-departmental searching based on interests, Turner and the student decided that the major that best suited him and his desired discipline was geophysics, which is in LAS.

Another goal of the exploration pathways and the DGS advising team as a whole is to counter the myths about the relationship between a student’s degree and the jobs they will be offered when they graduate from the University.

“Studies show, and they have shown for the past 15 years, that 10 years out of college most students are not in a career directly related to their undergraduate degree,” Turner said.

Turner said the education students receive at the University is not teaching students how to perform one specific job. Instead, the University’s education is about receiving the tools and skills to be productive in any job a student chooses to pursue. To this end, there are many majors across departments that will achieve this goal.

Turner said there is no ultimate formula to picking a major because the process for each student is very different.

Michael Lee, freshmen in DGS, said his process for deciding what major to pursue is first to decide which majors would make the most money and then ask his parents what they believed he should pursue. Lastly, he looked more into the major and its requirements for application into the college.

“I’m actively searching for majors that pique my interests, so I would simply just go to the extensive major list and look at those that sounded intriguing,” said Cristian Camacho, freshmen in DGS.

Turner’s key in understanding students’ interests is through basic conversation. For example, asking questions about past experiences or clubs they’ve attended. The other part of the process is having students talk to people who know them well and taking a variety of classes that interest them.

“It’s about showing students different paths and helping them realize there are a lot of different options,” Turner said. “Our job is all about teaching.”