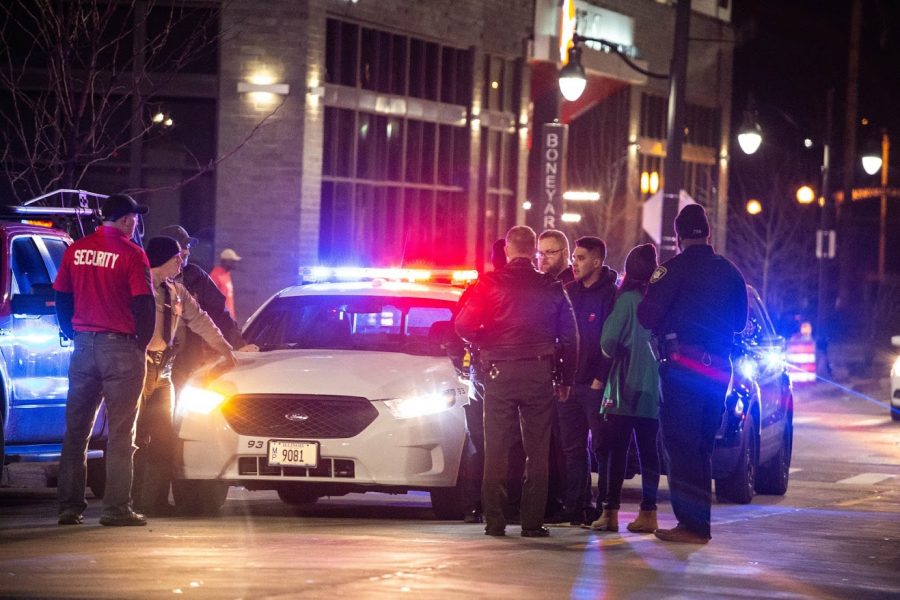 Police talk after issuing a drinking ticket during Unofficial on Friday.

The campus received 28 citations for Unofficial St. Patrick’s Day this year, which is over a 50 percent drop from last year’s 57.

Jeff Hamilton, communications manager for the City of Champaign, said in an email a total of 28 city Notices to Appear were issued during Unofficial. Only one arrest was made for aggravated battery to a police officer and a total of 11 medical transports were reported.

This year’s Unofficial was a very mild event, something the City of Champaign and law enforcement are glad to see, Hamilton said.

Patrick Wade, communications director for the University of Illinois Police Department, said in an email that citations from the University celebration has gone down half from 2018. The number of citations given has also been declining during the past few years.

“The number of citations has been trending down for many years now,” Wade said. “This reflects the University’s efforts to encourage more responsible behavior on Unofficial and that fewer people are participating.”

Wade said the drop is a positive result from students and the campus community engaging in more responsible behavior. While difficult to predict, he hopes the trend continues into future Unofficial celebrations.

“We always say that we have no problem with students enjoying their free time, as long as it’s in a way that is safe, healthy and respectful of each other and our campus,” Wade said.