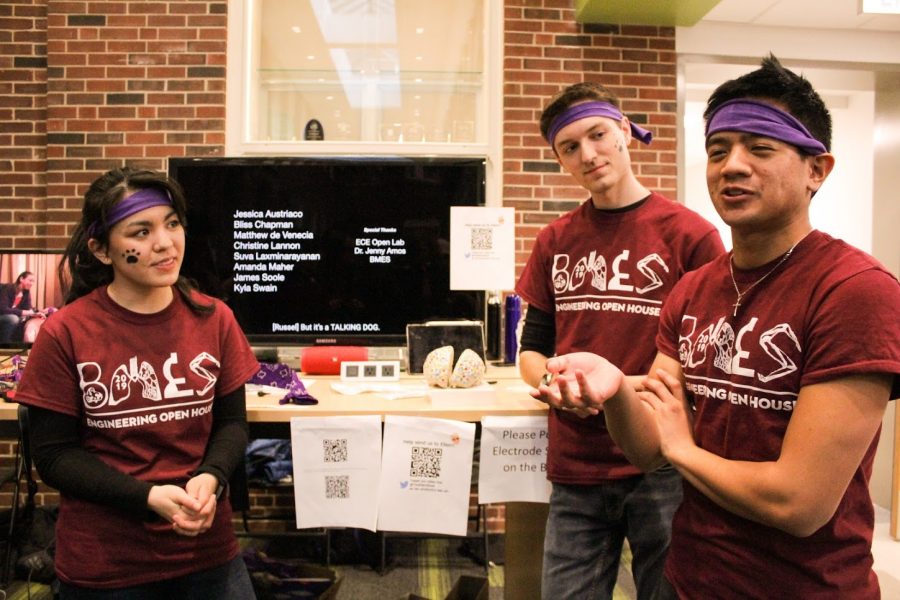 The University’s Engineering Open House will have a prototype of “Dug the Dog,” inspired by the talking dog collars in the popular Pixar movie, “Up.”

The project is being tested on a yellow Labrador Alma, named after the campus’ Alma Mater statue.

According to the GitHub explanation of the project, “Project Dug is an exploratory effort to extract actionable signal from a custom electroencephalogram (EEG) cap being built for a dog named Alma.”

Bliss Chapman, senior in Statistics and Computer Science and team member of the project, said the project was funded by the University Engineering Council as part of the Engineering Open House 2019.

Chapman has created a prototype that uses 3D printed electrodes to tune into a dog’s brain activity. The prototype applies machine learning techniques to associate the electrode signals with a certain stimulus. When the electrodes record a stimulus, the dog’s feelings trigger a vocal recording.

“So if Alma is shown a treat, certain frequencies in her brain increase in response to that,” Matthew De Venecia, senior in Engineering and Bliss’s teammate said in an email. “The program records and recognizes that increase then plays the message.”

De Venecia said that someday, the technology can be used to help veterinarians understand what is wrong with an animal.

“Someday, brain interface technology not so different from this could unlock high bandwidth communication with other species, giving us new perspective on the limits of human perspective and reasoning,” Chapman said. “Other projects have entirely different sensory systems and often see the world much differently than we do.”

At the moment, the technology is only being used on dogs but it can be used in other ways.

“Our electrodes function for both humans and dogs but at this time we don’t have plans to apply our technology to other species,” Chapman said. “However, we have open sourced our code base and would be happy to assist anyone interested in tackling this challenge.”

The prototype will be on display at the Engineering Open House in the Atrium at Everitt Laboratory on Friday and Saturday.

Correction: A previous version of the story misidentified the group as a startup. The Daily Illini regrets this error.