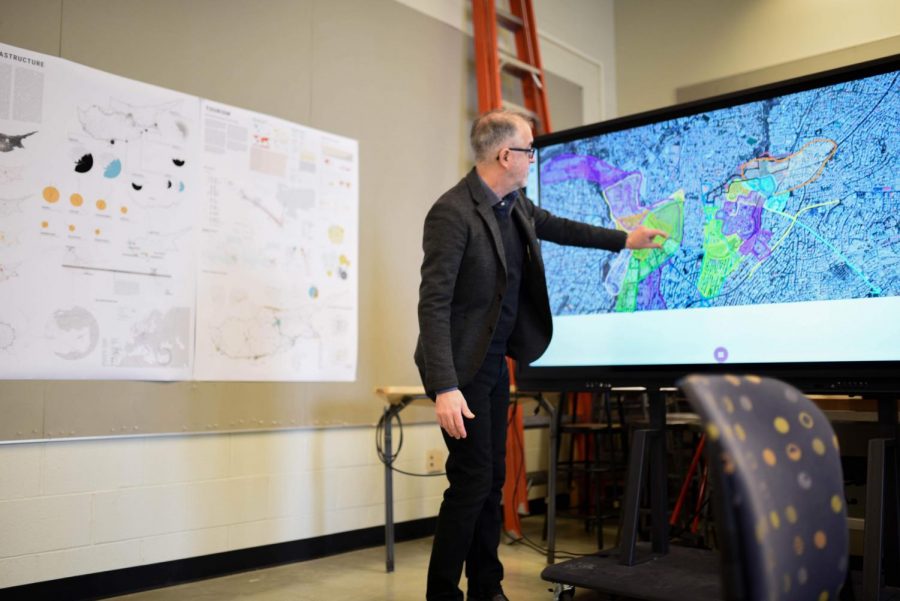 On Friday, Stephen Sears, associate professor in FAA, points to a section of a map where his students worked on a long-term project for his class.

With a total of 60 students, one of the smallest departments at the University, the Department of Landscape Architecture, may not always receive acknowledgement from the campus community.

However, the department’s bachelor program was recently ranted No. 3 in the country by College Factual, a website which compares universities for upcoming college freshmen.

Located in FAA, the department was first established in 1907. The University was among the first institutions in the country to offer an academic and degree program in landscape architecture, according to their website.

Stephen Sears, associate professor in FAA, is proud of how students impact the community. However, he believes one might not be able to recognize a landscape architect’s work right on the spot.

“The scope of landscape architecture is about developing projects for the environment, which is a public space,” Sears said. “It is not something that is easily noticeable in comparison to a architecture project because it is a building. We make space and spaces often aren’t perceived as easily.”

Students in landscape design require workspaces larger than your average school desk, and the class is more immersive than most classroom environments. Students are given a problem to address for their project, and they work through a process to draw and create physical models.

“The design is a process, and so it is about applying a set of skills to a problem to get to an outcome. The work is big and the plans are large since we work at the scale of a city,” Sears said.

William Sullivan, professor and head of the department, considers it is not hard to get into the program at the University, but there is a small number of students because of the lack of interest toward the field. There are more people interested in technology design; however, he deeply believes a career in landscape architecture is good because it helps the environment.

“We have the capacity to create places that not only provide high-level qualities but opportunities to experience healthy lives. We create healthier places and neighbors in which people get to know each other,” Sullivan said.

Sears believes the University doesn’t leave the department on the side. Upcoming projects within the campus are improving the academia in the department.

“The University is committed to designing, particularly through the new upcoming design center that’s being built and a number of other initiatives throughout the campus,” Sears said.

Students in this department have received national recognition with their designs, such as being honored by the Illinois Chapter of the American Society of Landscape Architects. However, not all students are aware about the success of this department.

Jasmine Cuasay, sophomore in Engineering, confessed she did not know the Department of Landscape Architecture was offered to students.

“It’s sad to think about how limited my knowledge is of the other departments. UIUC is marketed mostly as a school for engineering and business. I wish there was a way to promote more of the smaller departments, ones that need applicants the most so that they could get the funding to help their department,” Cuasay said in an email.

Ellies Martin, sophomore in FAA, enjoys being a part of the department. He appreciates the opportunity of having a close relationship with his professor when it comes to upcoming projects. However, he wants more exposure for his department aside from just advertising.

“When you are walking around you don’t really think of who built this. When you walk into a park you don’t think about that, you just enjoy the space. I wish more people got involved more with it,” Martin said.