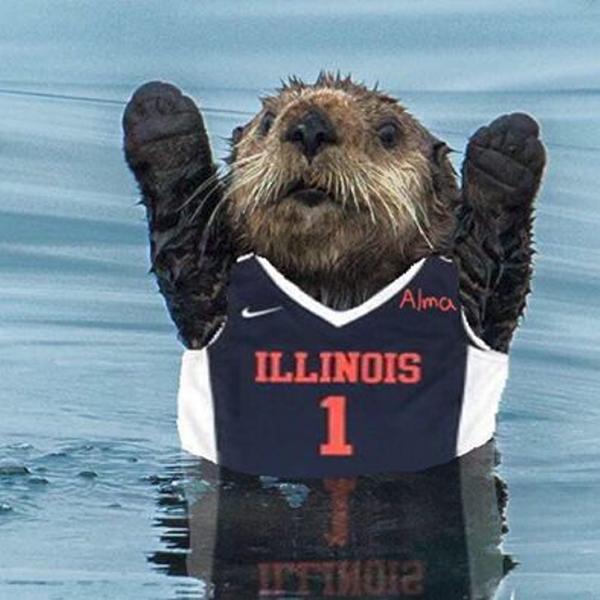 The Alma Otter mascot campaign hit a roadblock Friday; 52 percent of participating student voters voted “no” to adopting the otter as a symbol of the University.

The question, “Do you approve of making Alma Otter an official symbol of the University of Illinois at Urbana-Champaign?” on the Spring 2019 Illinois Student Government ballot resulted in a 3,510-3,807 vote.

“This year is the best year to pose this referendum, whether or not students want the University to move on and accept Alma Otter as the new symbol and mascot,” Zhou said prior to the vote.

The student vote signals a new chapter for the viral Alma Otter phenomenon. Three months ago, Alma Otter was nothing but a word association joke between a few friends.

On Dec. 13, University juniors Austin Lindell, Connor Latham and John Farwick were celebrating Farwick’s birthday at Cocomero, a frozen yogurt store on campus. Lindell glanced at Alma Mater across Wright Street and made the joke. Latham and Farwick laughed, went back to their apartment with Lindell and photoshopped the pun to life.

The group pulled up an image of an otter — specifically with its arms up, to resemble the statue — layered on a jersey with “Alma” scribbled on the corner and added the otter’s reflection in the water for professional flourish. This took “like 10 minutes maximum,” Latham said.

The next day, Lindell posted the image to the University subreddit as well as Facebook meme page “UIUC Memes for Underfunded Teens.” On Reddit, it garnered 500 upvotes, on Facebook it received nearly 1,500 reactions. From then on, it was hands-off for the juniors.

“We didn’t have anything to do with it after that, support just built through the students,” Lindell said.

Their off-hand pun became a rallying point for online student communities. Students came up with reasons to justify the mascot, such as river otters making an ecological comeback in Illinois, Lindell said. The preeminent Alma Otter Facebook page, run by student senator Sekiguchi, sports over 1,100 likes.

University-unaffiliated Twitter editor @IlliniCreative posted its photoshop of Alma Otter as a costumed mascot. Their design received over 300,000 impressions and appeared on ESPN’s Around the Horn, a roundtable discussion show.

Meanwhile, online forums flooded with student-made mascot proposals, to varying levels of sincerity. An eagle, Chief the Flying Illini, the 22N Illini bus and the Bell Tower as the Eye of Sauron, referencing to popular series “Lord of the Rings,” made the rounds on Twitter, Reddit and Facebook.

“Champ” creator Mike Skibski still plans to present his mascot idea to the Board of Trustees, and is discussing a possible collaboration with Alma Otter supporters, Skibski said.

“I don’t feel bad about it because we came up with this as a joke and we wanted people to laugh about it,” said Latham. “The people that don’t like it? Too bad, I guess.”