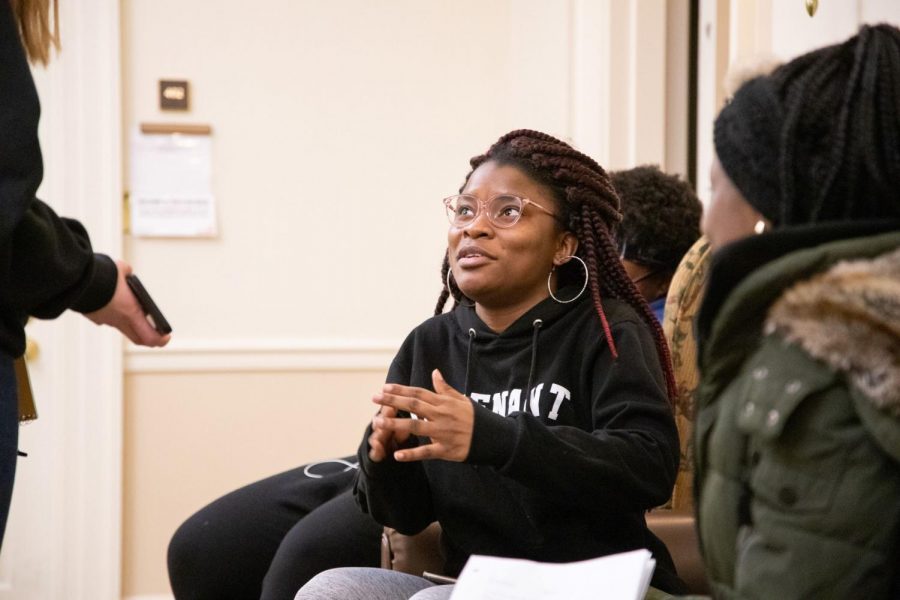 Olayemi Adebayo, junior in LAS, discusses her experience writing a letter to a prisoner on Tuesday. Students are reforming the Volunteer Illini Projects program after it was disbanded several years ago.

A group of students are making a difference in the lives of prisoners by becoming pen pals with them through a program organized by the Volunteer Illini Projects.

The program was disbanded about four years ago, said Yanjun Pan, senior in Business and director of the prisoner pen pal program.

“We keep receiving letters from previous pen pals or new pen pals (who) just want someone to write to, so that’s why I decided to pick up the program,” Pan said.

The program pairs college students with prisoners to write letters to. Currently, the program has 182 prisoner pen pals and the number is growing.

“Some of the volunteers have multiple pen pals just because at the beginning of the time, we were kind of short of volunteers and many prisoners just want to get matched immediately and start writing,” Pan said.

Lesly Marroquin, senior in LAS and coordinator for the program, has five prisoner pen pals. However, having too many pen pals has been less of an issue as the number of college students in the program increases. The program currently has almost 200 participants.

“The major reason that they want to have a pen pal is they really want someone to talk to because for some of them, there are cases where they have no one to talk to anymore, and they want to just hear from someone. Most of them say they just want friends,” Pan said.

Some prisoners might have to do intense labor to earn money to purchase letter-writing materials, so the group is considering providing them with envelope and letter paper, Pan said.

Having someone to write to can benefit prisoners psychologically, Pan said.

“It’s really important for us to help them regarding mental health because (they are) incarcerated, in close space and people do get affected by the fact that you can’t leave a facility,” Pan said.

Though the correctional facilities are not in the Champaign-Urbana area, participants in the program still take safety precautions while writing to their pen pals in prison.

The program specifies students are not allowed to send any pictures and they use pseudonyms, Pan said.

“It’s a really great opportunity just for volunteers to know more about what’s inside the jail just because it’s not being talked about very often,” Pan said.

Some of the prisoners write about harsh punishment, horrible conditions and even say they’re innocent, and although the program cannot provide legal service, it can still offer support, Pan said.

“What I wrote back to him was just other scriptures because it’s part of my faith and I was able to connect with him on that level,” Adekale said. “We’re not in their shoes; we don’t know what they’re going through but just little words like this can touch somebody, so that’s why I love this whole idea.”

She also encouraged him to continue to strive and believe in what he’s doing, as well as using his circumstances to the best of his abilities in her letters.

Olayemi Adebayo, junior in LAS, wrote an introductory letter to a new pen pal. She thinks a letter is meaningful for people who are in prison.

“I hope he smiled while reading my letter,” Adebayo said.