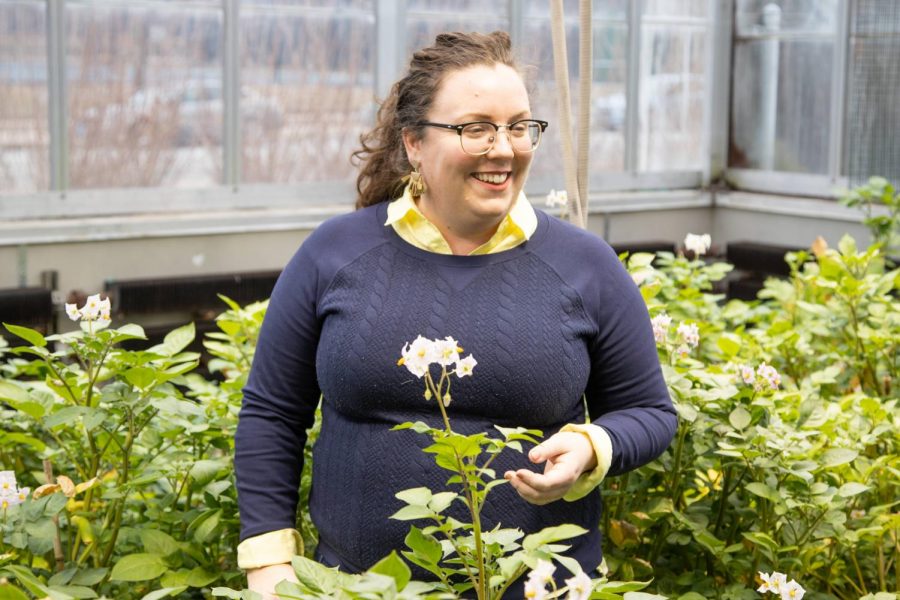 The United Nations predicts the world population will reach 9.7 billion by 2050, and to meet the demand, food production must double. Sustainably feeding a growing population with fewer resources in a changing climate will prove a challenge.

University researchers may have brought the world closer to a solution, with a 40 percent boost in plant growth through increased photosynthetic efficiency.

The study is a part of Realizing Increased Photosynthetic Efficiency, an international research project that partners with universities to make photosynthesis more efficient in order to sustainably increase worldwide food production.

“To double productivity in the next three to four decades, we need to do things that we haven’t done before,” Ort said. “If you look at what traditional breeding is doing, it’s not increasing yield fast enough to meet where we need to be in 2050.”

Photorespiration, a process where plants take in oxygen and give out carbon dioxide, occurs because rubisco is unable to tell carbon and oxygen molecules apart, and incorrectly grabs oxygen 20 percent of the time.

This process greatly suppresses a crop’s growth potential  by wasting the energy produced during photosynthesis.

“It’s almost unfathomable for us to imagine the potential yields of calories, but also potential financial gain for farmers that are lost just to photorespiration,” said Amanda Cavanagh, a postdoctoral researcher who worked on the study.

Researchers used computer models such as inSilica to help engineer an alternative pathway for photorespiration which leads to greater photosynthetic efficiency and yield.

Ort said computer models allows them to narrow down billions of possible combinations down to candidates who show very high promise and begin to approach them experimentally.

The study was initially conducted on tobacco plants because they are easily able to be genetically modified to produce more seeds. Tobacco plants’ short life cycles also help speed up the experimental process, Ort said.

Researchers are now in the process of applying this technology in food crops, such as soybeans, cowpeas, rice, wheat and potatoes. This allows them to examine nutritional content such as carbohydrates, proteins and essential amino acids.

The transformation process can take several months to complete, not including the time it takes for the crops to grow.

Transformed potato crops containing alternative pathways have already been harvested from greenhouses and will be growing at outdoor fields this summer.

This will help determine whether the transformed crops will be successful growing in higher density fields and crop canopies in which they are forced to share resources like light as opposed to just growing as singular plants, Ort said.

However, if the technology were to be successful in food crops, it would take at least 15 years before it can be implemented to wide-scale farming practices due to the timely processes of governmental agency regulations and breeding cycles, according to Cavanagh.

“A breeding cycle is the idea going from a proof of concept to something that you could grow in a field in Idaho that a grower would buy because they’re a high yielding crop,” Cavanagh said. “The length of time from this early stage science to getting a potato grower these elite potato lines is a really long time.”

Allergen safety, food safety, crop resilience and consumer acceptance are among some of the challenges this technology may face on a wider scale, Cavanagh said.

In terms of access in low-income regions, the Bill and Melinda Gates Foundation, which helped fund the study, created an emphasis in ensuring that farmers in Sub-Saharan Africa and Southeast Asia would have the technology available to them free of charge.

Agribusiness companies must also test to ensure these genetically modified traits will persist under unfavorable environmental conditions, such as drought or increasingly high temperatures. This is especially a concern since these technologies may not be available for wide-scale use until decades from now.

But before researchers can realistically be thinking of handing the technology license to agribusiness companies for further development, they must first demonstrate it increases yield in crop plants.

“We hope that a few successes in this area will spur much more effort and much more funding in this area,” Ort said. “We believe that improving photosynthetic efficiency has to play a big role if we’re going to meet this challenge of doubling production.”