Dates for CS proficiency exams moved to middle of semester 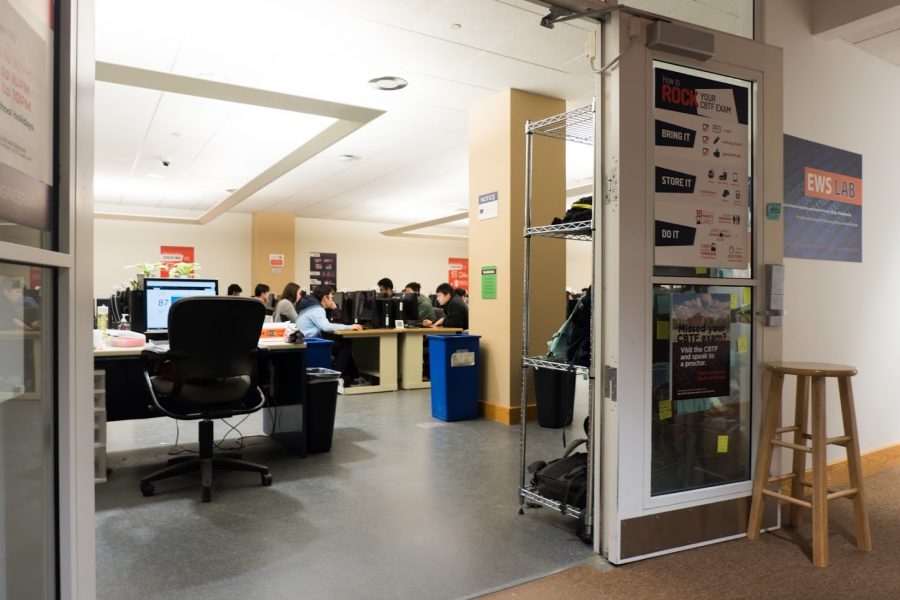 Students taking an exam at the Computer-Based Testing Facility in the basement of Grainger Engineering Library on March 12. Computer science proficiency exams will now be offered in the middle of the fall and spring semesters.

Proficiency exams for computer science will now be offered to current students during the middle of either the spring or fall semesters, allowing them to test out of a class in the following semester.

The change was announced in late February, and the first exam with these changes was offered on March 9.

Geoffrey Challen, professor in Engineering, said the University’s computer science department made these changes to better ensure students are not able to register for a course until they take the proficiency exams for the course’s prerequisites.

Challen said the biggest concern for the department is that students were registering for CS 225: Data Structures without having taken the prerequisite, CS 173: Discrete Structures.

Nayman Leung, sophomore in Engineering, said in an email he is planning on taking a proficiency exam to test out of CS 173. He said taking the exam in the middle of the semester will make it harder for him to remember the material he plans on studying over the summer.

“I am not quite on board with it,” Leung said. “I would much rather have it at the beginning of the semester while it is still fresh in my mind, but I do understand the motivation for it, being that it gives ample time and certainty for people who want to register for the class that requires credit gained from passing the proficiency test.”

Neil Patel, freshman in Engineering, said in an email he has not taken any CS courses at the University yet. He is planning on taking his first proficiency exam in hopes of testing out of CS 125: Intro to Computer Science. Although he supports the changes, he thinks the computer science department should have announced them in December.

“I don’t think it will affect me at all, because of when the announcement was made,” Patel said. “I can definitely see it helping scheduling issues for students trying to pass out of (CS 125) starting next semester.”

Challen said the department chose the dates for the exam to ensure students did not drop a course after receiving credit but also to allow ample time to complete the paperwork necessary to test out of a course before registration.

“We’re certainly always trying to set up thing in a way that’s in the best interest of the students,” Challen said. “Being able to ensure that students are prepared for the courses they enroll in and also being able to allow them to enroll normally and have more certainty about what courses they’ll be able to take in upcoming semesters, I think those are good things.”