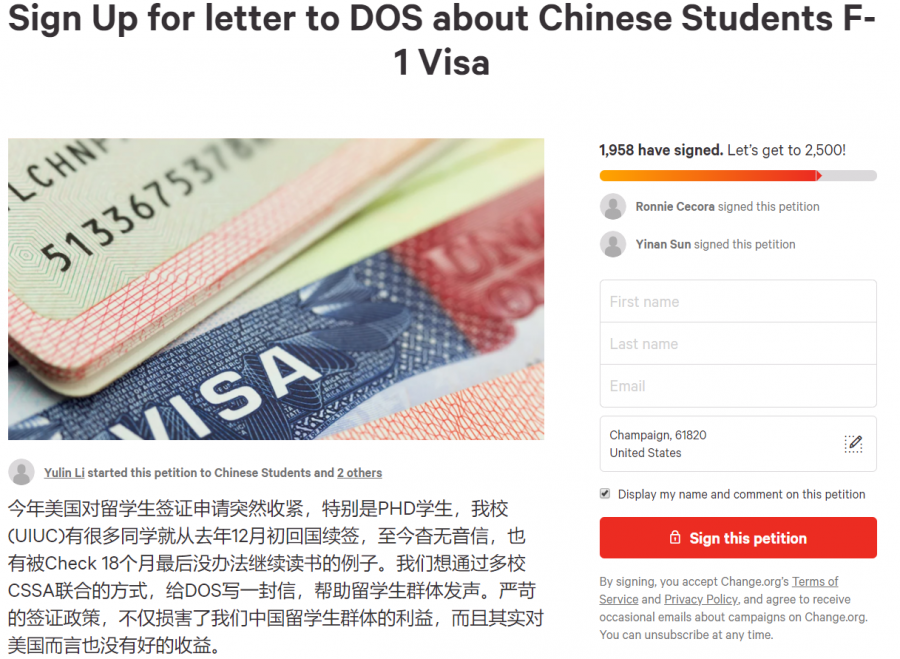 Screenshot of the petition explaining the actions of the Chinese Students and Scholars Association started by Yulin Li, president of CSSA at the University.

Chinese international students studying in the United States are experiencing a longer wait time for their F1 visas, which affects students currently studying at the University.

An F1 visa application must be filed by students who are planning on studying at U.S. academic institutions, including colleges.

Many of those affected are experiencing a wait time of more than two months for their visa to be processed, according to a co-signed letter by the Chinese Students and Scholars Associations at the University, the University of California, Berkeley and Cornell University. Several media organizations, such as Insight China, have also signed the letter.

“Many of us have already missed several weeks of the new semester. Even worse, some of us are losing the opportunity to continue education,” the letter said. “Some of us also participate in the funded research program and the delay of return is likely to cause tremendous financial loss and reputational loss for both the funding agencies and school.”

Yulin Li, junior in LAS and president of CSSA at the University, also started a petition, calling for help on Change.org. As of now, 1,976 people have signed to support the letter sent to the U.S. Department of State.

Weikang Chen, junior in Engineering, said in an email he was scared when he tried to apply for his visa because he is an aerospace engineer, which is considered a “sensitive major.” Sensitive majors are fields of study important in helping the U.S. compete with China and include majors such as computer and material sciences.

However, Chen said he is not too worried about the recent visa problem because there are many students who are studying these majors. He said if the government rejects all of them, the U.S. will face a great financial loss.

“For now, there is no influence on me, and I hope I can stay away from the visa problem in the future,” Chen said.

Penghao Zhu, doctoral student in Engineering, said he returned to China and renewed his F1 visa. He got his visa on Tuesday after three months of waiting for the administrative processing.

Zhu said during the months he was waiting for his visa, he sent weekly emails to the embassy. However, the replies did not provide any explanation of why the embassy held his visa for extended months.

“It’s painful,” Zhu said. “I say (waiting for the visa) is torture, totally torture. The endless waiting makes you have no hope.”

The process was even more difficult for Zhu because his girlfriend broke her leg during the winter when Zhu was in China waiting for his visa. Because of the processing, Zhu was not able to come back to campus and take care of her.

The University made arrangements in hopes of helping Zhu. For example, his professor helped him find a short internship at Tsinghua University in Beijing.

Zhu said he will not choose to go back to China after he graduates because of the visa problem.

“Certainly it will have an influence on us if we cannot go back home for years,” Zhu said. “It’s not humanity. The visa policy built a wall for all Chinese (people) who want to pursue a career in the U.S.”