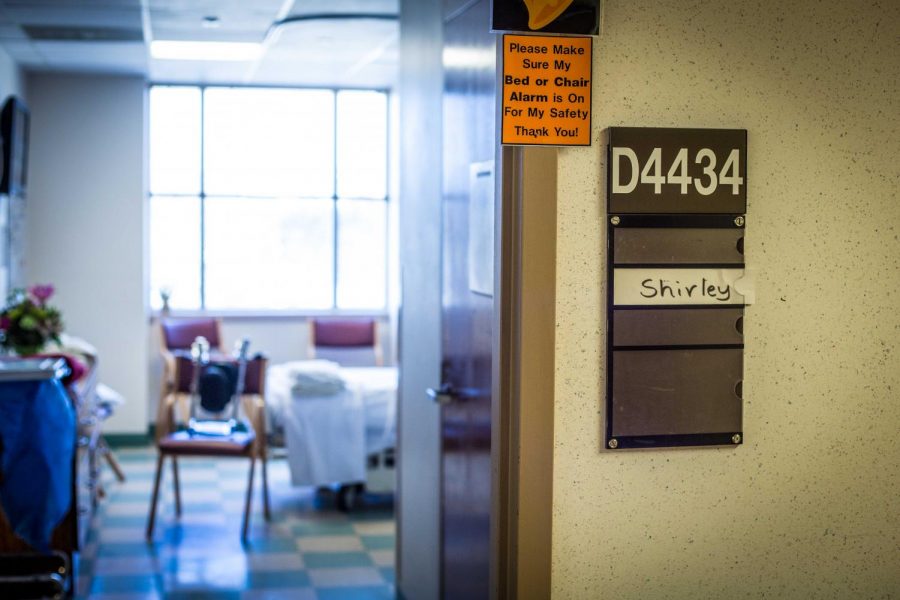 An empty patient room in the OSF Heart of Mary Medical Center on Monday.

A recent study conducted by a research team, including University professor and senior research specialist in Social Work Ted Cross, focuses on discovering how multiple sclerosis impacts the actual well-being of patients and families.

According to the National Multiple Sclerosis Society, “multiple sclerosis is an unpredictable, often disabling disease of the central nervous system that disrupts the flow of information within the brain, and between the brain and body.” Though people are most commonly diagnosed with MS between the ages of 20 and 50, a diagnosis earlier or later than this window does occur.

“There are disease-modifying treatments, and the families (from the study) are using them for the most part, but there’s no cure,” Cross said.

Cross, as well as other researchers, conducted a study about the experiences of parents and families with children with MS.

David Rintell, also a researcher involved with the study, said the team applied for a grant with the MS society.

Rintell is a psychologist at Partners MS Center at the Brigham and Women’s Hospital in Boston and the Partners Pediatric MS Center at Massachusetts General Hospital. He is an active researcher and clinician of mental health care in MS, as well as caregiving for patients and families.

Rintell said there was almost no literature about parents with children with MS, which made it a topic he felt was meaningful to study.

This is not the first time Cross and Rintell have worked together.

“In the ’90s, David and I did a research project on children’s experience with their parents with MS. Now in this project, we study parents experience of their children with MS,” Cross said.

At the time of their previous study, Rintell said many doctors and professionals did not diagnose MS in children because they thought it only impacted older people. Before the first pediatric diagnosis of MS 12 years ago, children were likely to be misdiagnosed with other neurological conditions.

“I think many are unaware of the pediatric form of this illness and in fact perhaps (are) taken by surprise because, for many years, a catchphrase for multiple sclerosis was a ‘crippler for young adults.’ You wouldn’t expect this to be occurring in kids,” Cross said. “This has probably contributed to the diagnostic odyssey that these families take, where it takes months or even over a year to arrive at a diagnosis because people don’t expect it.”

According to another study conducted by Cross and Rintell, pediatric-onset multiple sclerosis makes up 2.7 percent to 10.5 percent of all MS cases.

“The thing that was quite notable even before we did the interviews for the study is how challenging it is for parents to have their child diagnosed with a very serious, long-term and potentially disabling disease that is almost unrecognized by the general public, with no expectation that this would happen,” Cross said.

The primary reason for the study was because parents’ sufferings were clear. However, Rintell said children with MS were very committed to getting well. This is because young people do not tend to see as far into their future as parents.

“They have a much better comprehension at the implications of MS in a young person over the course of a lifetime,” Rintell said. “Young people typically do not think along those lines.”

Rintell added that one of the most important things in partnership with the MS society is holding family gatherings.

“The kids can talk to each other. They would have peers who were dealing with the same problem that none of their natural peers were,” Rintell said.

However, some families were more reluctant to go to the events held by the MS society because they would see children who were in worse conditions, which could potentially be alarming to other children. Regardless, Rintell said he believes the family gatherings are helpful.

“We were very impressed with the resilience of the families that we interviewed and how well they’d adapted to the illness, to the point that we felt like their recommendations for other families were very useful,” Cross said.