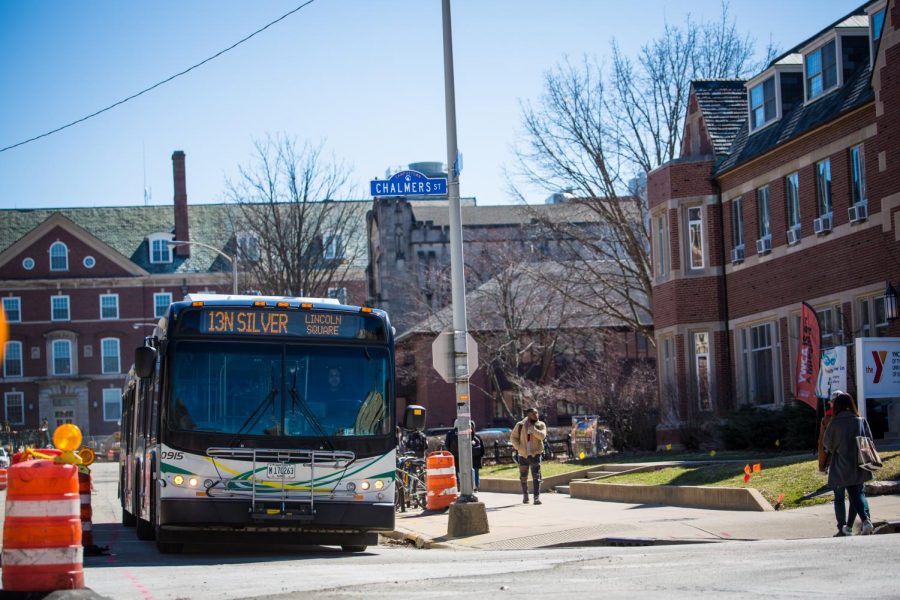 The 13N Silver stopping in front of the YMCA due to construction on Tuesday.

Stage one of Project 4 of Multimodal Corridor Enhancement Project started earlier this week, resulting in some route changes for the Champaign-Urbana Mass Transit District buses. MCORE is a partnership between Champaign, Urbana, the University and MTD.

Several routes and stops will be changed during construction, which will last for three months. Currently, only southbound routes are affected.

Here are all the buses that are affected by the construction:

North — Armory stop not functioning; South — Springfield to Goodwin to Gregory to Sixth to Pennsylvania to Lincoln, does not go down Armory.

East — Armory stop not in function; West — Wright to Green to Goodwin to Gregory to Sixth; Transit and Armory stops not functioning.

Wright to Green to Goodwin to Gregory to Sixth. Transit and Armory stops not in function.

North — No changes; South — Green to Fourth to Daniel, does not go down Armory. Transit and Armory stops not in use.

Wright and Chalmers replaces Armory for most northbound routes.

Fourth and Green (SW Far Side)