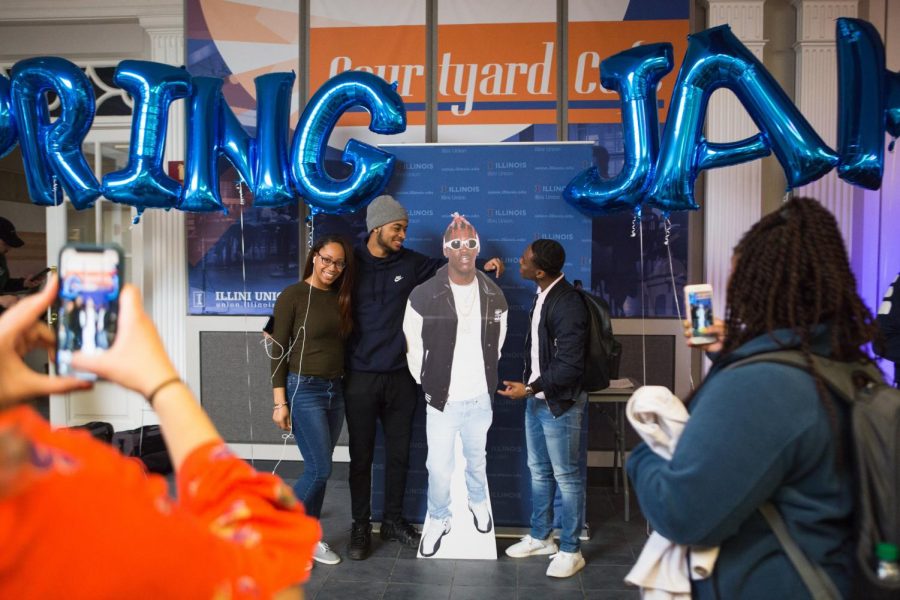 Students pose with a cutout of Lil Yachty as he was just announced as the performing artist for 2019’s Spring Jam in the Courtyard Cafe on Thursday.

Lil Yachty will be playing at Spring Jam 2019, the annual spring concert held on the Main Quad.

Prior to the announcement, three clues were given to party attendees to use to write down their guesses for a chance to a win a $50 gift card to the Illini Union Bookstore. The clues were photos of broccoli, a red velvet cupcake and a magnifying glass.

“I saw broccoli which made me think of the song ‘Broccoli.’ Then, I saw a magnifying glass which wasn’t as direct but I thought of ‘iSpy,’ so right away I was thinking Lil Yachty,” said Moises Reyes, freshman in Engineering. “I’m kind of excited for it. (He’s) not one of my favorite artists, but I like some of his songs.”

Other guesses from students included D.R.A.M, CupCakKe and Akon.

“(Spring Jam) definitely embodies the student campus,” said Deja Cook-Reynolds, director of the special events committee for the Illini Union Board, which helps organize the Spring Jam event. “It’s a time to take a break from class, relax your brain and enjoy the music. Everybody loves a sense of upbeat involvement.”

Cook-Reynolds said the committee sent out a survey where students were able to vote for who they would like to see perform at Spring Jam.

Dehler said Lil Yachty was selected by board members at the State Farm Center and Star Course after receiving the list of possible options from the IUB.

“It’s a good opportunity to have a good time before finals kick in,” Sayani said. “I think it will be fun.”

Previous Spring Jams artists include Lil Jon, B.o.B and Timeflies. This year’s Spring Jam concert will be held on April 28 on the Main Quad.