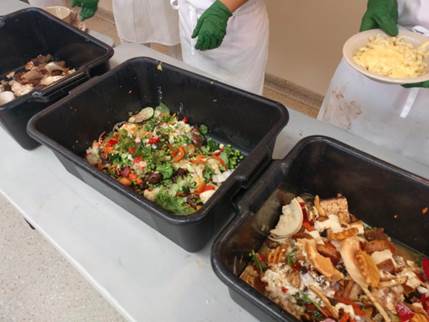 A University professor conducted a study to examine whether or not a piece of paper is capable of changing a diner’s action, as the structure of dining halls often causes students to waste food.

Brenna Ellison, professor of Agricultural and Consumer Economics, initiated her own research about the impact of educational campaigns on reducing food waste by studying diners’ choices and the amount of food they put on their plate. Ellison designed and developed the content for the campaign, helped with collecting data in the dining halls and completed the data analysis.

The research started in 2016 and took place in two dining halls on campus: Ikenberry Dining Hall and Pennsylvania Avenue Dining Hall. Ellison categorized the Ikenberry as the treatment site, the place that was observed, and PAR dining hall as the comparison site.

The educational campaign method used for this research was posters placed on tables at Ikenberry explaining  the problem of food waste in the United States. Information was also written on napkin dispensers to distribute the message.

“The weighing and sorting procedures were the same in both the treatment and comparison site. In each, we placed tables in front of the dish drop-off area and collected students’ plates. From there, we sorted leftover food into bins for meat proteins, fruits/vegetables, and others,” Ellison said in an email.

Students who dined at either dining hall were not tracked, meaning they did not know they were part of a research, which gave Ellison’s team reliable results regarding eating behaviors of students.

After finishing the research, Ellison came to the conclusion that using educational campaigns to try to reduce food waste at an all-you-can-eat buffet style dining hall did not produce an outstanding result regarding the amount of food thrown away. However, the campaign itself did affect student attitudes toward food waste.

Before the distribution of the campaign, an average student would waste 88 grams of food at the Ikenberry, or the treatment dining hall. After the campaign, the average of food wasted decreased by 3.45 grams. There was a 3.9 percent difference in total food waste.

Ellison said if she were to do this study again, she would make two changes to her research.

“I would keep the campaign going for a whole year. This would help to give insight on whether these sorts of educational efforts work in the long-run,” Ellison said. “Second, I would want to find a way to weigh how much food students started out with in addition to how much they wasted. The campaign could have caused students to take less food from the serving lines, which could mean less food had to be prepared.”

Thurman Etchison, assistant director of Dining, Facilities, and Equipment for University Housing, said he was happy to assist with Ellison’s research.

“Our role was to help facilitate, but we have not been directly involved in the studies recently. During the plate size study, we provided the space, scales, and the smaller plates required for the research. We also helped in the development of the questionnaire used for the study,” Etchison said in an email.

Fatima Castillo, student in LAS and dishwasher at PAR dining hall, said she is glad there was a study done about food waste at dining halls. However, she believes there should be more student action made regarding food waste reduction.

“I’m at the end of the line, so I see what gets dumped. If people are going to get something from the dining hall, at least try to be considerate and eat it. In a three-hour shift, we empty the food bin more than 10 times,” Castillo said.

Ellison hopes this research will inform the University community that although results were not outstanding, educational campaigns may be a low-cost strategy to make diners aware of waste and is a step toward making a difference.

“The impacts on behavior may be more modest than say, changing the pricing structure or removing self-serve options. Educational campaigns, though, can help to change attitudes and beliefs about waste, which is an important first step to changing behavior,” Ellison said.