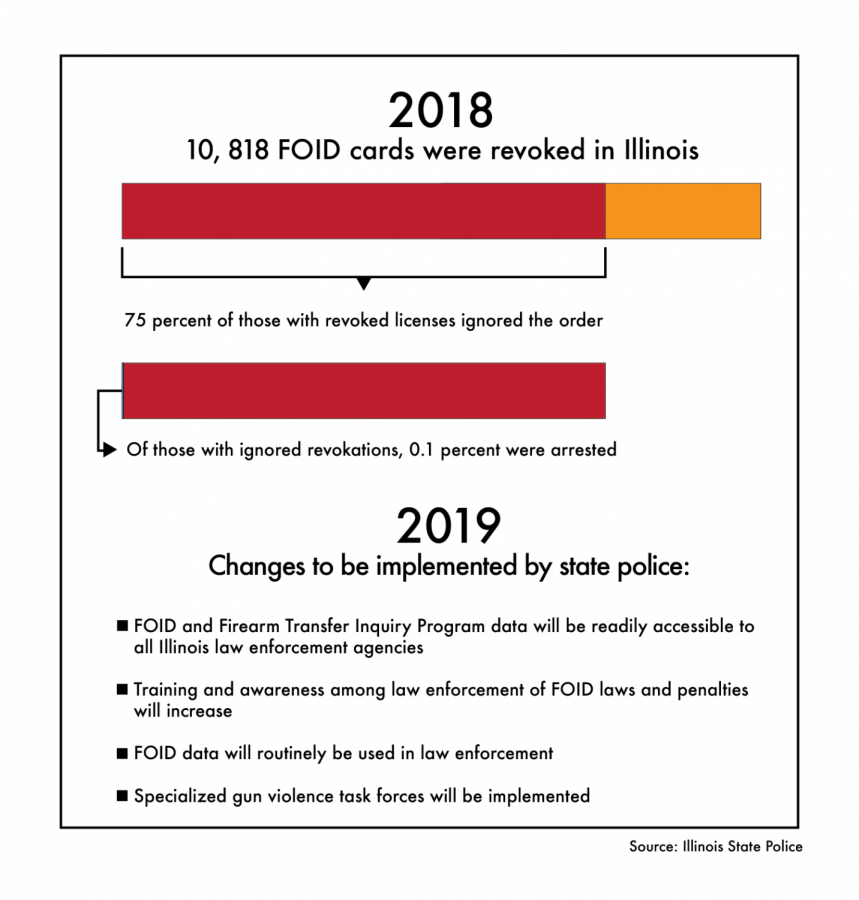 The Illinois State Police recently released a list of changes aiming to make it harder for felons to keep firearms, but some groups feel these changes do not go far enough to address the problems with the Firearm Owners Identification system.

The state police released these changes three weeks after a gunman killed five people in Aurora with a weapon he wasn’t supposed to have, due to a felony aggravated assault charge that prevented him from legally owning firearms, according to USA Today.

These changes are aimed at improving operations and information sharing between law enforcement agencies when firearm owner identification cards, or FOID cards, are revoked.

The FOID system requires every Illinois resident to have a firearm owners FOID card to legally possess firearms or ammunition. These cards are issued by the Illinois State Police to any qualified applicant.

One of these changes will have each sheriff, police chief and state’s attorney informed why a FOID card has been revoked and whether the revoke has turned over the card and weapons.

Urbana Police Chief Bryant Seraphin said the police department has not seen the effects of these changes yet because they are still so new, but he hopes to see positive effects.

According to these changes, local law enforcement will be provided a list of firearms purchased by people whose cards have already been revoked. It will also impel increased training of FOID laws and penalties.

“While we simply cannot do it alone, we must increase sharing of information, the quality and value of information shared, and most importantly enforcement. Mailed letters are not enough,” said Brendan Kelly, acting director of the Illinois State Police, in a statement.

These changes are a part of the Illinois State Police’s commitment to improving the existing gun laws of the state.

“While the weaknesses of our nation’s background check system remain daunting, we must take whatever steps we can, large and small, to strengthen the fabric of these systems because any improvement could be the one that makes the difference,” Kelly said.

Richard Pearson, executive director of the Illinois State Rifle Association, said he has no problem with changes the state police is making to increase communication between law enforcement agencies.

“We don’t want people who shouldn’t have firearms to have firearms, but we still have to protect the innocent,” Pearson said. “It is important that innocent law-abiding people are protected so that this process doesn’t sweep them up inadvertently and do them harm.”

However, Pearson said there are a number of complications with the FOID system that these changes do not address.

Some of these complications include police confiscating all firearms in a home if one person has a revoked or unrenewed FOID card even if there is a FOID card owner present in the home, Pearson said.

Sometimes people can have their FOID cards revoked by mistake from the police, which puts innocent people in jeopardy, Pearson said.

Jack Johnson, president of Illini Republicans, said in an email that he believes the FOID system used in Illinois is unconstitutional and ineffective, citing the state’s inability to give FOID card applicants their approval or denial within 30 days.

Johnson said he finds all of the changes being made by the state police to be meaningless because each time a person goes to purchase a firearm they go through a background check.

“We witnessed in the recent Aurora shooting, our FOID system is clearly broken,” Johnson said. “A long time felon passed both the ISP’s background check and the one that was applied to him upon purchase.”