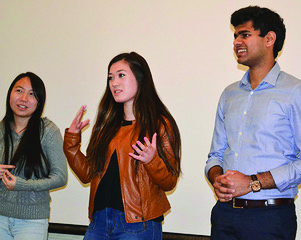 Kendall Furbee speaks at the Engineers for Social Justice Scholars Pecha Kucha event. Research done by Sarah Clifton, assistant professor in LAS, points to general increases in the number of women in STEM in recent years but the proportion of women compared to men was found to be lower.

Certain patterns regarding women in STEM fields sparked interest in research assistant professor Sara Clifton from the Department of Mathematics.

Clifton and her research team created a mathematical model in hopes of answering these questions. They concluded gender parity in professional hierarchies may never be reached in some fields unless there are conscious efforts to address these gender disparities in the workplace.

“A major process that goes into whether someone is deciding to apply for promotion is whether they feel like they belong in that next level up in the hierarchy,” Clifton said. “Seeing lots of women in the level above you, if you’re a woman, would make you feel more comfortable. That’s called homophily — self-seeking, seeking people who are like you.”

According to the model, the teaching of chemistry, math and computer science are predicted to never reach gender parity, at least in the highest levels of leadership. In contrast, medicine, law and journalism are expected to reach gender parity without the need for intervention.

Despite lower levels of gender bias in engineering due to affirmative action initiatives, the field is expected to remain male-dominated due to higher levels of homophily.

If a field has gender bias, Clifton said resources should target hiring committees to ensure they’re trained in unconscious bias. If the homophilic feelings are stronger, more resources should be used for recruitment targeted to people who should be applying for promotion.

While the model isn’t sophisticated enough to be directly applied, Clifton is planning on continuing her research to refine the model by incorporating more societal and behavioral factors that weren’t initially accounted for.

One of these factors is how women tend not to apply for promotions as often as men with equal experience levels because of prior research, which found women tend to feel they need to be more qualified for positions than men do.

In a separate 2018-2019 “Women in Illinois” report set to be released early this summer, women take up 35 percent of University tenure-line faculty positions. This includes positions such as assistant professors, associate professors and professors. Professors specifically have the largest gender disparity with 25 percent of woman accounting for this position.

The report also finds in higher-level leadership positions, women take up 36 percent of department heads and 19 percent of college deans.

Yuting Chen, assistant professor in Engineering, earned her bachelor’s degree in electrical engineering at the University in 2007.

Since her time at the University, she said she noticed the number of women in engineering has skyrocketed. However, she said it is still difficult to encourage women to apply into Engineering.

Chen emphasizes the importance of creating a community by offering a women’s mentoring group in her classes.

“Community is very important. If you’re thinking you’re that only one who’s having this problem, it’s such a lonely feeling,” Chen said. “If you see there’s a community and other people also have similar problems, and somebody is there to help or maybe hear your problem, to help you get through it, I think that will make a big difference.”

Kendall Furbee, senior in Engineering, was part of an organization called MakerGirl, which was started by female students and aims to inspire young girls to pursue STEM through 3D printing sessions.

“Meeting other female engineers and getting involved in MakerGirl really helped with turning my views into a positive mindset,” Furbee said. “Through MakerGirl, I was able to get a lot of female role models in engineering, and it encouraged me to want to be a role model for younger women and underclassmen.”

Furbee believes young girls may start to lose interest in STEM at a young age by the lack of proper exposure to creativity in STEM fields and being discouraged by the male-dominated fields. She said it’s important for girls to have female support systems and female role models they can go to.

“There’s a huge benefit in having a female role model because it’s someone you can picture yourself as,” Furbee said. “If you’re looking into the future of an engineering profession and all you see (are) men, that really doesn’t make you want to do it at all.”

There are several resources on campus offered for women in STEM, like Women in Engineering and Women Empowered in STEM. Furbee also thinks STEM teachers should be more trained to recognize how to lead a more inclusive classroom in consideration to large gender disparities.

Programs offered to women, such as the YMCA’s Women in Leadership project management internship, train women to develop skills like professional development, leadership and  problem-solving.

“We’re helping women develop their sense of self, capacity and confidence so that when they are in the workforce, they are ready to apply for promotions and be as assertive as, perhaps, their male counterparts in the same field,” said program director Michelle Awad.

The program also addresses how women can recognize and battle imposter syndrome which is associated with feelings of inadequacy and doubts in one’s accomplishments.

“That’s a huge thing that comes up for women and especially in the professional world is feeling like, ‘I’m just this imposter and people are going to find out that I’m not good enough to be here,’” Awad said.

Awad believes a part of women being able to see themselves in leadership positions is learning how to face rejection.

“The way we get over these barriers is (seeing) things from a broader perspective and not (taking) things personally so that when rejection comes, we just move through it and believe that we’re still leaders and we’re still capable,” Awad said.

Clifton believes it’s important those in positions of power are making efforts to implement institutional change to address gender parity in the work environment.

“Having the sort of training required to get rid of bias on hiring committees and having the sort of resources necessary to recruit talented women to pursue STEM fields, say, it takes money and it takes power,” Clifton said. “I hope the money and the power are devoted towards making people feel like they belong in fields that they find interesting.”