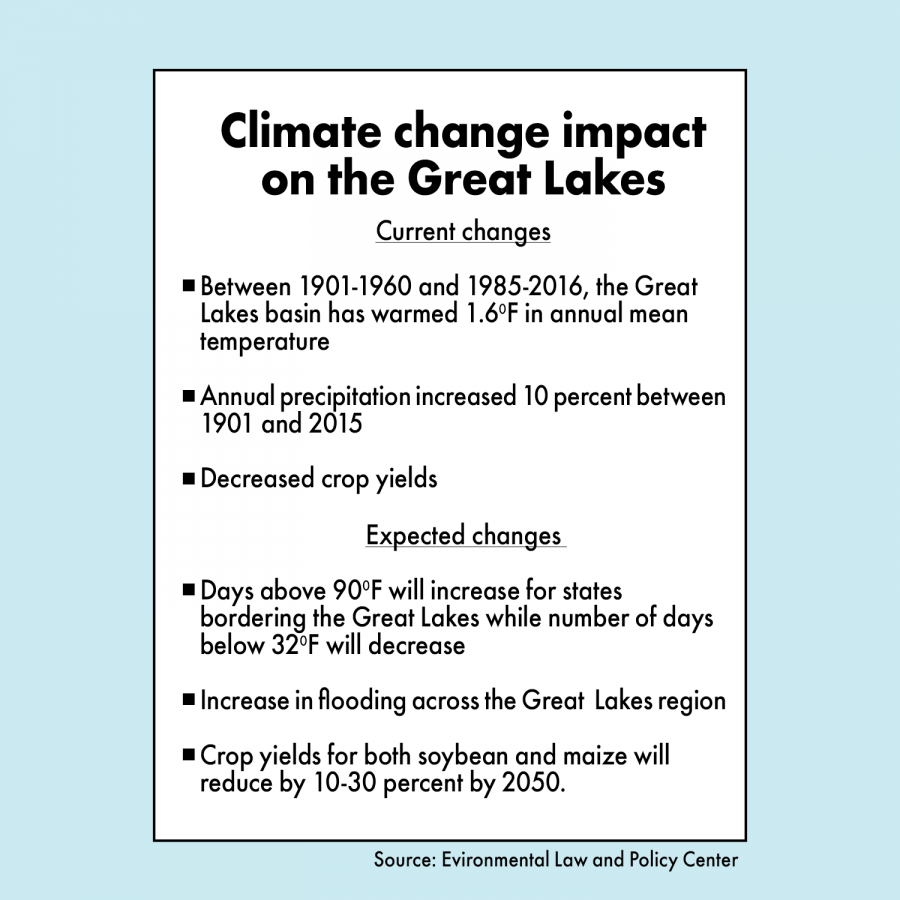 A team of Midwestern experts led by a University professor has released a report about the threat climate change poses for the Great Lakes region.

“Changes to climate are having a huge impact on our pocket books — on our lives — and it is important people recognize that,” said Donald Wuebbles, professor in LAS and team leader.

The region is home to over 34 million people and supports one of the world’s largest economies, housing industries such as fishing, tourism, agriculture and industrial manufacturing, all of which will be affected by climate change, according to the report.

Wuebbles was asked by the Environmental Law and Policy Center and the Chicago Council on Global Affairs to lead the team of experts from the Great Lakes region to produce the report.

Earth scientists, atmospheric scientists, biologists, hydrologists, engineers and other experts contributed to the report. Wuebbles said their work mainly meant to look at the U.S. portion of the Great Lakes region, but two Canadian scientists were also involved.

Some of the threats detailed in the report include increased air temperatures, heavy precipitation and flooding, extreme weather and decreased crop yields. Wuebbles said a 20 percent decrease in corn and soybean yields could be seen by mid-century.

According to the report, precipitation could rise by 10 to 40 percent, overloading water treatment infrastructure, increasing sewer overflows and the quantity of waterborne viruses flowing into streams, rivers and Lake Michigan.

Extremely warm days will increase and extremely cold days will decrease for states bordering the Great Lakes, especially in southern parts of the region.

Wuebbles said increased air temperatures and shifting precipitation patterns will cause habitat conditions, soil moisture and other conditions to shift, driving some wildlife species northward and others westward.

Anna Dirkswager, climate and energy policy advisor at The Nature Conservancy, said in an email she found the study to be a critical warning message to take action before it’s too late.

The Nature Conservancy is a national nonprofit organization, which aims to protect natural sites across the nation. Dirkswager said Midwest chapters of the organization are forming strategies to take on climate change related problems in the Great Lakes region.

Her organization is working on utilizing natural working lands as a means of removing carbon from the atmosphere. Midwest chapters are implementing conservation efforts and mitigating greenhouse gases through strong bipartisan public policy, Dirkswager said.

“More and more, we are witnessing the impacts of a warming planet — take this year’s flooding and its impact to agriculture throughout the Midwest — we are all seeing firsthand the localized effects of climate change, and we need to start talking about our concerns and connecting with our neighbors on solutions,” Dirkswager said.

A recent study found more than 70 percent of Americans think climate change is in effect. Dirkswager said she is encouraged by the number of voices calling for action to address climate change at both the state and federal level.

“Investing in a clean energy future is not a partisan issue; it’s an issue on which every one of our future’s will depend,” Dirkswager said.