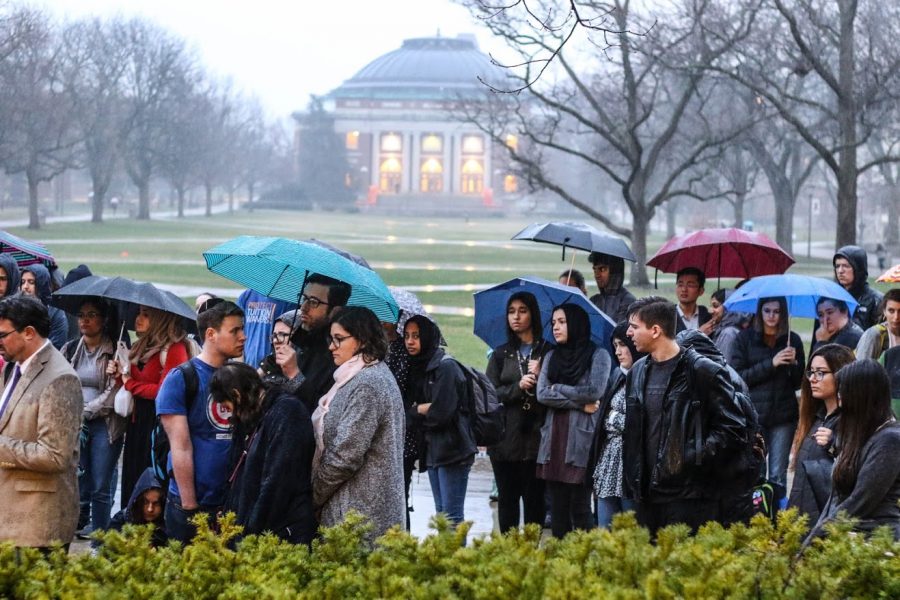 Students and other community members gather on the Main Quad for a vigil honoring the New Zealand shooting victims on Thursday, Mar. 28.

News of the terror attacks on two mosques in Christchurch, New Zealand on March 15, killing 50 people who were attending weekly Friday prayer, did not take long to reach the University community.

Muslim groups all around the University community came together on March 28, two weeks after the attacks, for a solidarity vigil at Anniversary Plaza outside the Illini Union to commemorate and pray for the victims and their families. Marihah Muhsinah was one of the speakers at the vigil.

Muhsinah, sophomore in LAS and social media chair for the Underrepresented Muslims and Minorities Advocates, said she clearly remembers the Friday morning she found out what happened.

Muslim groups all around the University community came together on March 28, two weeks after the attacks, for a solidarity vigil at Anniversary Plaza outside the Illini Union to commemorate and pray for the victims and their families. Muhsinah was one of the speakers at the vigil.

“For the vigil, one thing we had is we printed out the names and pictures of all the victims and little stories about them,” said Aminah Bilal, senior in LAS and secretary of the Muslim Student Association. “They had a kid, this is how old they were, they were a professor or something or a doctor. When I was reading them I was like, ‘Wow these people are actual people,’ obviously, as anyone is, like you and me.”

Despite the pouring rain during the second half of the vigil, Bilal said the turnout was great.

“Even the chancellor and his wife were able to come,” Bilal said. “We also had the campus police chief make an appearance and the vice chancellor.”

Bilal said it was nice to see the University make a statement and show Muslim students on campus they are supporting them, especially in tragic events such as this shooting. Seeing the University’s support helped her feel safe as a student as well.

“I thought it was very important that we come together as a community, acknowledge the tragedy that happened and the very particular way that certain individuals, particularly people that are Muslim, were targeted in a very intentional way,” said Ross Wantland, director of Diversity and Social Justice Education and a speaker at the vigil.

Wantland said the first thing people should do is listen to what their Muslim friends might need at this time.

“It’s such a massive tragedy that sometimes we don’t realize the ways that that’s going to impact everyone day to day, even though we’re across the globe from New Zealand. So just even asking, ‘How are you doing?’ and checking in with people (can be helpful),” Wantland said.

Following the New Zealand attacks, some organizations, such as the Central Illinois Mosque and Islamic Center in Urbana, initiated extra safety measures.

“We have taken some security measures, and the main reason is to help our people and the community at large,” said Marwan Yousef, head of safety and security at CIMIC, the local mosque.

Yousef said the Urbana police department was generous in providing a policeman and squad car for two hours during Friday prayer every week to help people feel more at ease.

“We cannot thank Urbana enough … the smallest of the ranks to the highest of the ranks,” Yousef said.  “The mayor of Urbana was absolutely superior as well. Everybody showed interest and they fully supported us.”

Muhsinah said many people have reached out from the C-U community. There are interfaith councils from the YMCA that have made efforts to reach out to Muslim students on campus.

“I’d say overall, even if it’s very minute, there has been an impact, and hopefully it can grow from there,” Muhsinah said.

Muhsinah said she feels lucky to be a student at the University because the school has a large, diverse Muslim population.

“Just by virtue of the fact that this is such a diverse community we have here, I always feel welcome and supported,” Muhsinah said.

In Muhsinah’s words in her speech at the vigil, “Whether you believe in Islam or not, whether you believe in God or not, please, be just in your actions, realize the privileges you hold, work to better society for your fellow humans and highlight the voices of those who are not listened to, those who are told they are not worthy. Because then, and only then, will we be able to achieve such a place where all can live together without bigotry or violence.”