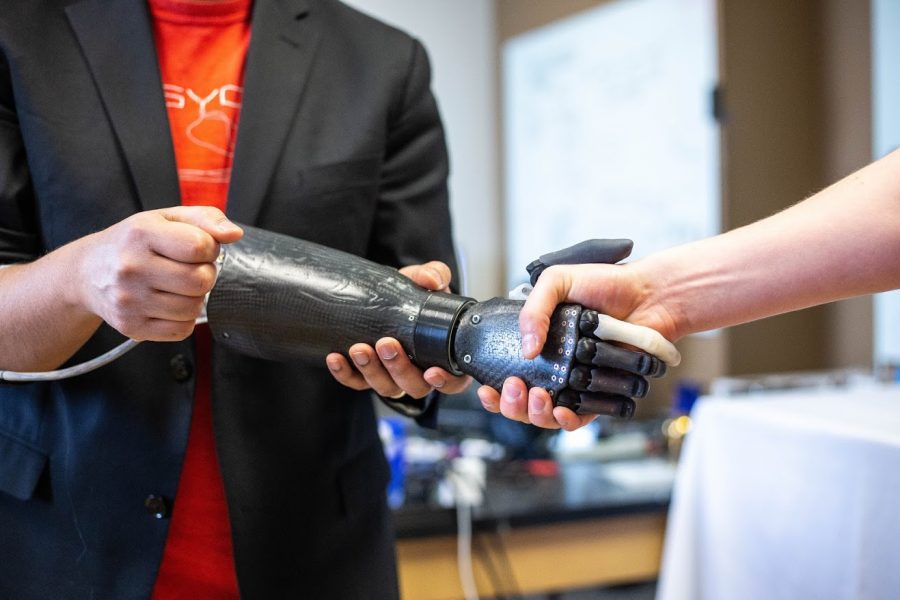 The ability to hold an egg, to pinch our fingers together and to feel the hand of a family member all seem like simplistic acts of everyday life. However, according to a University website, for the nearly 2 million people living with limb loss, these tasks are difficult and for some, even impossible. Recently, new prosthetic technology has been developed making these simple acts a reality for these amputees.

Aadeel Akhtar, CEO and founder of PSYONIC, is one of the faces of this new prosthetic innovation. PSYONIC is a company that produces advanced bionic hands. The company is based at EnterpriseWorks at the University.

“Our prosthetic hand is actually faster, smaller and stronger than all the other prosthetic hands that are out there, and on top of that, we give them their sense of touch back which is something that no prosthetics on the market are able to do,” Akhtar said.

“We can send current across your skin and change the amount of current and the timing of the current,” Akhtar said. “We can get it to feel like different things.”

The idea of PSYONIC and Akhtar’s passion for creating advanced prosthetics came from his trip to Pakistan at the age of seven. There Akhtar met a girl his age missing a right leg. This young girl, who was living in poverty, had to use a tree branch as a crutch. Ever since then, Akhtar has been dedicated to creating an advanced and affordable prosthetic.

The creation of the company happened in 2014 when Akhtar went to Ecuador to display the first version of the robotic hand, originally 3D printed, for a nonprofit Range of Motion. Akhtar and his team soon realized that the only way to release this product to the masses was to create a company.

In the early days of the company, Akhtar said research was started by calling clinicians and asking them what the biggest issue was with their prosthetic models.

“We spoke to over 100 (clinicians), and every single one said that the $30,000 biotic hand on the market breaks  petition AlphaLab Gear. The winning team receives $3,000 to invest into the company.

With the company’s winnings, Akhtar said they are planning on making the arm waterproof and expanding their sales and marketing presence.

“We plan on launching officially by the end of the year, so what we plan to do in the next six months is reach out to all the clinicians in the Midwest area and start getting word out so that when we launch we already would have all the sales lined up,” Akhtar said.

PSYONIC is also currently working on a new version of the hand. Jesse Cornman, senior robotics engineer at PSYONIC, displayed the new hand which has slower and more natural movements.

Although the product is robotic, the impact is purely human. Sgt. Garret Anderson was serving in Iraq when he lost his arm to a roadside bomb. With PSYONIC’s prosthetic, he is able to hold and feel his daughter’s hand.

Juan Suquillo, who first tried the robotic arm in the early days of the company, was able to make a pinch with his hands for the first time in 35 years. When he was able to pinch, Suquillo said he felt a part of him had come back.

The successes of the company didn’t come without risks. Akhtar put his education on hold and is currently on a leave of absence from the University’s medical school while he pursues his career with PSYONIC. His advice for students thinking about starting their own company is to be ready to go all in.

“It just takes a lot of perseverance. You have to just jump into it and give it everything you got or else there is a million reasons to quit,” Akhtar said. “If you’re going to do it you then have to give it your all.”