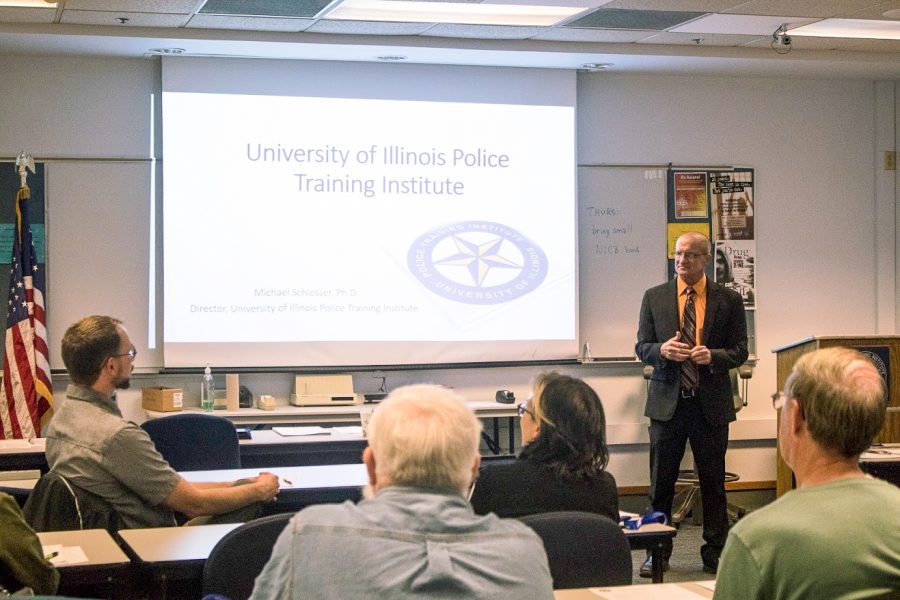 The interactive 10-week program will cover topics such as de-escalation, DUI enforcement and crime scene investigations. Students taking the course will also have the opportunity to visit the Champaign County Jail and meet some of the Champaign Police Department’s K-9s.

The class is free and takes place every Thursday from 6-9 p.m. in the Police Training Institute building located at 1004 S. Fourth St. in Champaign.

Michael Schlosser served as a lieutenant for the Rantoul Police Department before retiring. He is currently the director for the Police Training Institute, as well as the main instructor for the 10-week course.

“When citizens have the opportunity to gain knowledge and learn about all the different aspects of policing … then that gives them a better perspective when they’re trying to understand things they see on TV or read in the paper,” Schlosser said.

Schlosser said the topics vary each year because each person has different interests. He said he also tries to get input from previous years’ courses.

Urbana city council member Shirese Hursey attended the first class on Thursday night and shared what she hopes to learn by the end of this course.

“I hope to be more informed about … what police officers have to go through,” Hursey said. “But also in my ward, we don’t have a neighborhood watch … and I think doing this would be helpful for getting a neighborhood watch, neighborhood associations and be able to get information about how to get those things going in our ward.”

Schlosser shared how the Police Training Institute reaches out to the public so they are aware that these classes are available to them.

“The reason I signed up for this class is because I started working for Champaign County as a programmer and one of my responsibilities will be working with the sheriff’s department … and I wanted to learn more about … the way that they do stuff,” Adams said.

If the students attend 7 out of 10 classes at the end of the program, they will have the ability to graduate and get a small certificate saying they completed the course.

“During graduation, we’ll call them up one at a time, give them their certificate (and) we’ll have a big cake and everything,” Schlosser said. “Yeah, it’s a big celebration at the end.”