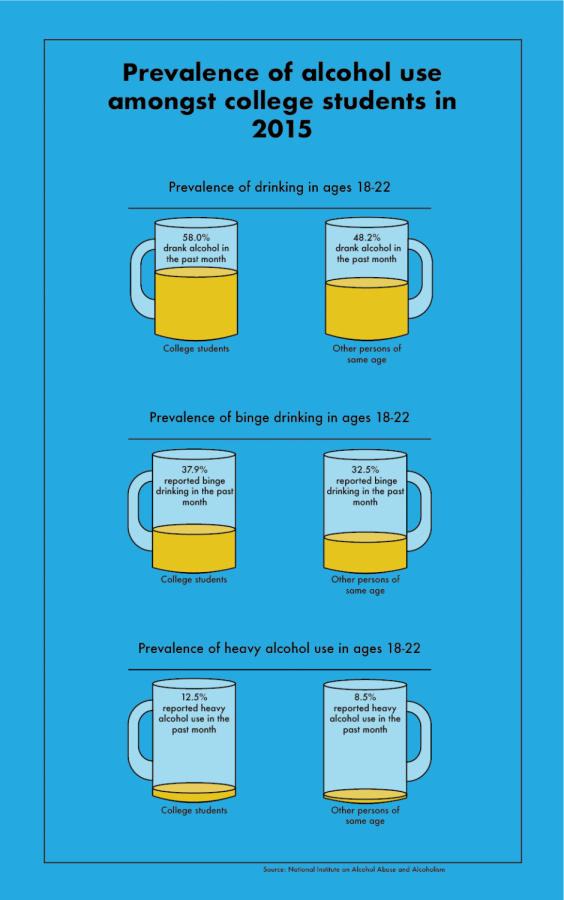 Questioning the behavior of ordering another drink, taking another sip and repeating it the next week, a research study has worked its way back to answer these questions to create smarter interventions down the road.

With a team of researchers, Catharine Fairbairn, assistant professor in LAS, is conducting a series of studies to help contribute to a culture of awareness and responsibility surrounding alcohol consumption. Unlike others, this ongoing research administers alcohol to healthy participants of legal drinking age.

Some participants are given vodka sprite, a drink without a distinctive flavor, and then asked to participate in a series of activities throughout a laboratory session of over six hours.

While Fairbairn’s research in the Alcohol Research Lab is not the first alcohol administration study at the University, it is a critical method that can demonstrate the causal effects of alcohol.

Separating causation to correlation, the laboratory design can ultimately help researchers understand how some people could develop problems with drinking, Fairbairn said.

“There’s some risks and some real responsibility that goes along with doing alcohol administration studies and a lot of protections we try to put in place for our participants, but then there’s some really valuable knowledge that can be gained from it,” Fairbairn said.

Advertisements recruiting research participants state $100 will be given to those who participate in the study without appointment alterations. Focusing on adults ages 21-30, Fairbairn said over 50% of participants are students at the University.

Roughly 25% of applicants are turned away because of ethical, safety and other reasons after conducting phone interviews that rely heavily on truthfulness.

Due to sensitivity of the ongoing research, Fairbairn could not disclose any details of the study.

Alexandra Escobar, senior in LAS, recently became a participant of the study after hearing about the research from a friend and saw it as a unique opportunity to be a part of before graduating.

“As somebody whose family members have gotten sick or killed from people using alcohol, it’s very, very interesting to me to see the science and see how people can learn how to understand how the body reacts to (alcohol),” Escobar said.

Working with young adults every day, the University’s Counseling Center has been operating the Alcohol and Other Drugs Program to conduct clinical assessments and prevention work with students engaging in alcohol and other substances.

With students exposed to a variety of substances from alcohol to marijuana, the program aims to educate students to make informed choices and reduce potential harm brought onto themselves or others, said Tekita Bankhead, education specialist and co-chair of the Alcohol and Other Drugs Program.

While the University has a very visible drinking culture, Bankhead said the program staff is aware  it does not apply to every student. By ensuring students there are not as many people consuming alcohol as they think, the pressure to engage in similar behavior as their peers is lessened.

“For students who are coming in, we recognize again every student is different, every approach needs to be different, but they all need to kind of have an understanding of choices and what some of their choices could look like,” Bankhead said.

Justin Rhodes, associate professor in LAS, said while some people do not become addicted to alcohol, those vulnerable to addiction can develop patterns of addictive behavior from a young age.

For young adults in college, being surrounded by a strong drinking culture can validate and increase the amount of alcohol consumption an individual might take.

“It starts at this age. So it’s not to be a small fraction of the people out there but making it part of the culture and allowing it, considering it perfectly acceptable and making the community at large, drinking can increase risk for addictions to start,” Rhodes said.

Fairbairn said even if the culture does not affect you, it is important and essential to think about the culture you are playing into and how it influences others.

Differentiating from other drugs, severe alcohol addiction can produce significant brain damage. While some harm is reversible, psychological associations with alcohol are difficult to detach from.

With addiction, life priorities are changed from relationships and social status to consuming a drug to get through the day. Rhodes calls this the most devastating tragedy of addiction.

“Alcohol is really one of the worst drugs if you think about (it) in the sense that it produces brain damage, life-threatening withdrawal, life-threatening overdose and then strong addiction, and that’s unusual for many of the other drugs. (With those) you don’t have all those bad things. It’s legal, but it’s definitely a dangerous drug,” Rhodes said.

Even years after addiction recovery, memories associated with excessive drinking can trigger cravings that can lead to relapse, Rhodes said.

“We don’t have a really good way of identifying who is vulnerable and who isn’t before they engage, and so the fact that college campuses endorse it and it becomes part of the culture is just accelerating or increasing risk for people to actually become addicted, and that that’s their whole life. It’s kind of strange,” Rhodes said. “It shouldn’t be.”