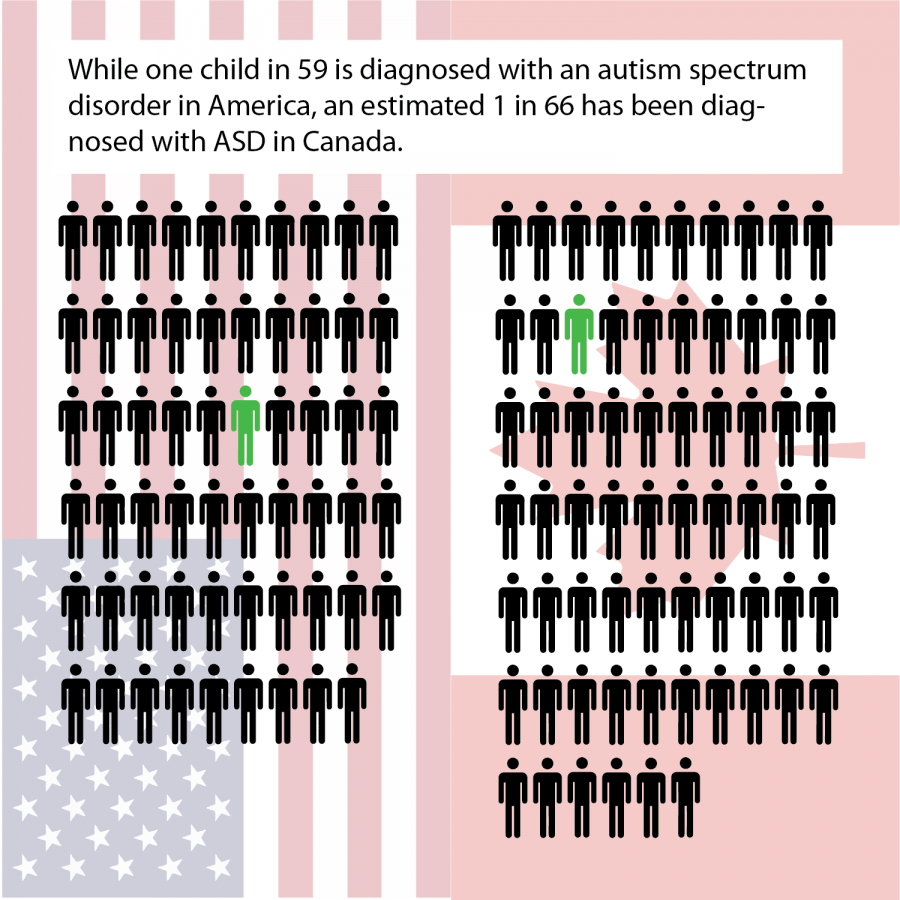 April is Autism Awareness Month, and numerous organizations have been working to raise awareness for the neurodevelopmental disability that affects many people around the world.

“The prevalence of autism continues to rise, with 1 in 66 Canadian children being diagnosed; therefore, the need for support and increased awareness is greater than ever,” said Lindsay Petrie, director of marketing at Canucks Autism Network, in an email. “At Canucks Autism Network, our ultimate goal is to create a future where every individual is understood, accepted and supported in all community spaces.”

Petrie added that to truly accept autism, people must gain a deeper understanding and move past simple acknowledgment.

“Canucks Autism Network strives to foster both awareness and acceptance of autism to create more inclusive and welcoming environments for all individuals and families living with autism,” Petrie said. “At Canucks Autism Network, we work to reach this goal by providing training and building accessibility resources for many sectors, including sport, recreation, first responders, schools, businesses, and a range of other community spaces.”

Canucks’ viral campaign post is called #CANDidYouKnow and features individuals with autism who share information regarding autism in Canada.

“The campaign was meant to inspire people to learn more about autism so that we can work together to create a future where every individual with autism is understood, accepted and supported in all community spaces,” Petrie said. “The decision to create a video featuring individuals with autism was an intentional effort to showcase the spectrum and how each person with autism is unique.”

The post has gained the support of the Surrey Fire Fighters Charitable Society, Vancouver International Airport, Bank of Montreal, Aquilini Development and the Canucks for Kids Fund. All have stepped up to match the initial $5,000, collectively raising $25,000 for Canucks Autism Network. The campaign also resulted in several smaller donations for the cause through the website.

“We are still shocked by the attention the campaign received and the various discussions that surfaced as a result of its exposure,” Petrie said.

Petrie said the organization is focusing on the positive impact of the campaign in British Columbia and the thousands of supportive comments from people all over the world, including those with lived experiences.

“The funds raised through the Did You Know campaign will support the continued delivery of our high-quality programming for children, youth, young adults and families living with autism in (British Columbia), as well as our training initiatives across (British Columbia),” Petrie said.

Vancouver Airport began its partnership with the Canucks Autism Network in 2014 with the aim of decreasing anxiety associated with air travel and building confidence for future travel success.

Kim Halowski, manager of community relations at Vancouver Airport Authority, said through the airport’s work with CAN, authority individuals were able to identify opportunities to make the airport as accessible as possible.

“As part of our Community Investment Program, we donate more than $1 million annually to community organizations, including CAN,” Halowski said in an email.

Vancouver Airport was also the first airport in Canada to implement a program that provides an expedited airport process for families and individuals living with autism. The Vancouver Airport Autism Access Sticker is applied to the boarding pass and provides expedited access through screening and U.S. Customs.

“We are thrilled to see the success of the #CANDidYouKnow social media campaign and that we were able to play a part by donating $5,000,” Halowski said. “It’s also encouraging to see that people continue to reshare the video, which highlights autism awareness and acceptance.”

Petrie was pleased to see the response and support of a Canada based organization from University students in the U.S.

“We were overwhelmed by the outpouring of support and are immensely grateful to all who shared the post and the important message behind it,” Petrie said.