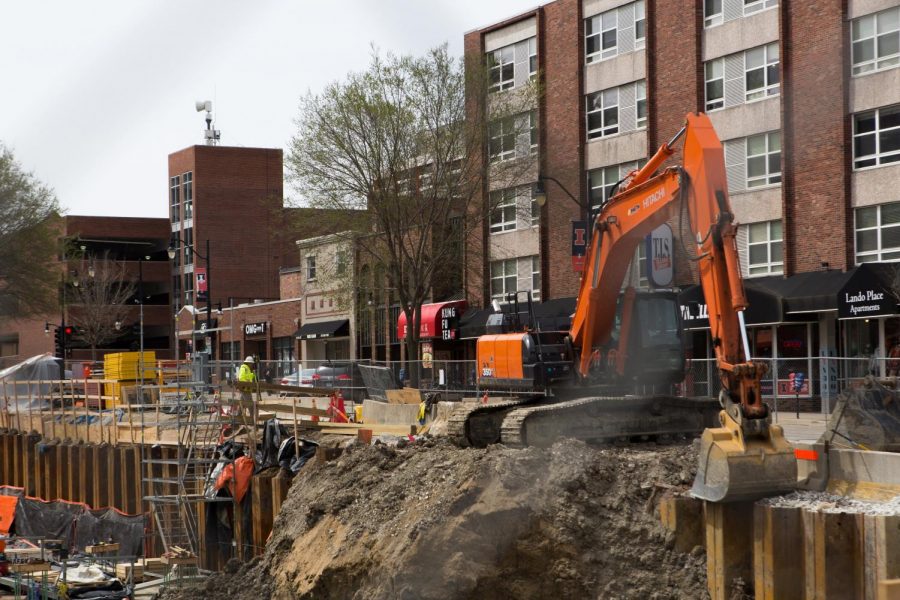 Residents of the Urbana-Champaign area can expect to see an addition of multiple businesses within and around the University campus in the near future.

Although the store will be on campus, Target aims to provide their services not only to college students and University faculty but to residents of the Urbana-Champaign community as well. Jacqueline Debuse, spokeswoman of Target, said that during the designing process, Target is approaching the new store thoughtfully when considering how to serve both populations.

“We see an opportunity to serve more guests in the Champaign-Urbana community, and as we are opening these doors across the country, one of our priority areas is opening stores on or near college campuses,” Debuse said. “We know that there is a need we can fill. We can bring in easy convenient shopping experience to those communities and that is what we intend to do with this store.”

The Hub is under construction by Core Spaces, a real estate management company. The first two stories of the building will have commercial uses, and the top 15 floors will be apartment spaces. It’s estimated to be around 17,000 square feet, which is about the size of a big Walgreens or a CVS according to Rob Kowalski, assistant planning and development director of the city of Champaign.

“We truly have curated to meet the needs of the community, so in the sense that we’re going to think about what’s going to be most useful to college students, to faculty, to visiting parents … we’ll make sure that the experience is centered around that,” Debuse said. “So I think that’s what still makes it Target but also makes it really relevant for local guests.”

The new Target is expected to open in 2020, according to the store’s website.

In addition to Target, a Costco store will replace the former location of Bergner’s, a department store that closed in the summer of 2018, at Market Place Shopping Center.

Costco is reportedly requesting $2.75 million in reimbursements of sales taxes that they will generate to build the store. Once the business opens and starts creating sales taxes through selling their products, the city will reimburse a portion until it reaches the amount of incentive dollars initially requested.

Both Costco and Target have been highly desired stores for the Champaign-Urbana community, according to Kowalski. Although there is a Target already open in Champaign, the Target being built on campus will provide convenience for students and faculty to shop without having to travel the distance to the Target store on North Prospect Avenue.

The upcoming stores are expected to provide increased sales tax revenue and create new job opportunities. There is no exact estimate for Target at this time; however, Costco is expected to start with 150 employees, with the potential to increase to 225 as the store begins to amplify, Kowalski said.

Additionally, Chick-Fil-A is expected to replace the Ruby Tuesday that was once open on North Prospect Avenue. Chick-Fil-A has reportedly purchased the property and received a permit to tear down Ruby Tuesday to build its Champaign branch.

There has also been speculation that a Taco Bell will be replacing Which Wich that closed on Green Street. However there is no evidence to confirm such at this time.

Jeff Hamilton, communication director of the city of Champaign, said in an email that there are currently no permits pending for sign changes or remodeling for Which Wich’s location. The city currently does not have any information about a restaurant replacing the vacant sandwich shop.

Kowalski also confirmed that there were no expectations for a Taco Bell to open in place of the sandwich shop.

Costco and Taco Bell were unable to disclose any information at this time.

Although Costco can’t disclose any information, Kowalski said that its upcoming location will greatly benefit the city.

“There are so many vacancies in malls across America now. We’re really overbuilt with the mall space, and these stores are not coming in like they used to because of online shopping,” Kowalski said. “So to allow the mall to be able to reduce its size and then still locate a Costco next to it which will be a huge customer attraction is good for the health of our mall … it’s not just about Costco, it’s about trying to keep our mall healthy, too.”