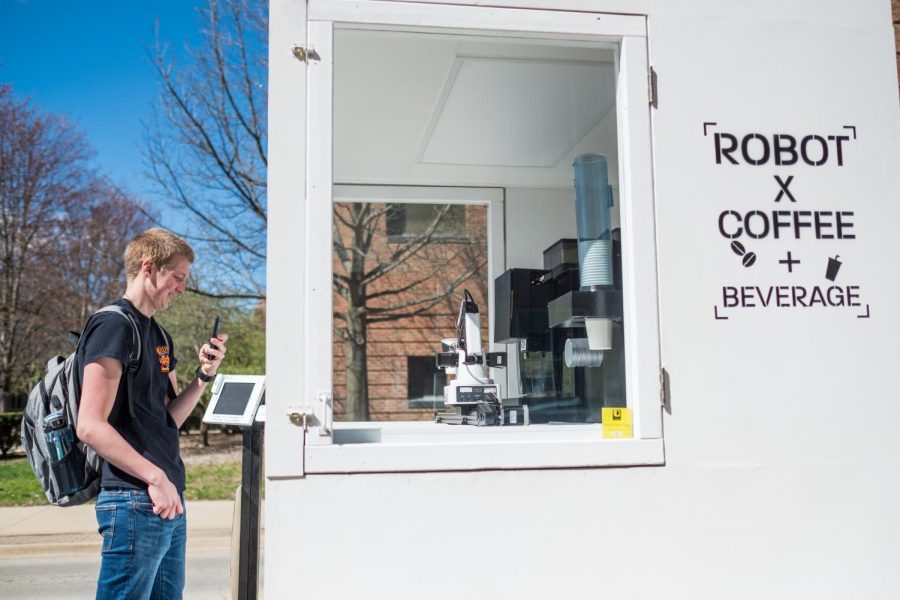 Cody Bainbridge, sophomore in Engineering, buys coffee from the Robot x Coffee Machine outside of Grainger on Apr. 14. The robot serves between 100 to 200 cups a day.

The Yummy Future Robot Café is a wheeled white cube with espresso machinery and a robotic arm encased in glass. Customers walk up a short ramp, select and pay for their beverage at the kiosk and watch the arm carry their cup to the machine, fill it with an espresso product and bring it out to them through a small opening.

If you’re unsure what to look for, you might miss the automated café. Its espresso was “one of the better coffees” he’s tasted, but University Police Department Officer Pete Milenkovic said he drove right past it at first glance.

“They might need a bit more attraction,” Milenkovic said.

Yummy Future co-founder Guangzhe Cui is a grad student in Engineering. For Cui and his team, their café is the newest extension of the Internet of things: real-world, practical devices armed with Internet connectivity.

Cui earned his affinity for robotics during his senior year as an undergraduate student. While Cui interned at Google in early 2018, he realized it was the perfect time to enter the industry.

As robotics prices dropped due to competition and demand for food services grew in the United States, Cui envisioned automating a restaurant chain. With cafés’ high labor costs, a robotic coffee-shop made perfect sense, Cui said. It also fulfills his philosophy on the role of humans in the future of business.

“For those routine works, we don’t want the future to be a group of humans just coming to the machine and being fed on the machine, but we want the humans to own the machines and find out ways to make the machines work for them,” Cui said.

In the short-term, the Yummy Future team is trying to find business partners, hire workers to maintain the station, obtain their patents and maximize revenue, Cui said. According to Yummy Future, the entire product cost around $25,000 to make. At their current sales rate, Cui expects to break even soon.

The Yummy Future team has technical improvement plans on the horizon. Implementing Amazon Alexa voice assistant technology, which they won through microgrants and a prize from the University’s Technology Entrepreneur Center Cozad competition, is a short-term priority.

Yummy Future left an impression on judges, not only with the project’s “outside of the box” thinking but their entrepreneurial personalities, said Catharine Ingram, TEC coordinator of Student Innovation and Entrepreneurial Programs.

“They have a lot of energy and they’re really engaged. That is really critical,” Ingram said.

Long-term, the team wants to add more capability to the café. Adding mobile pre-orders, a delivery system, dietary adjustments and lifelike customer service are all in the planning stages, Cui said.

“When people are seeing it mix things for them, they feel like they are being served. That feeling is that it’s especially made for them. We want to do those things, we are adding more machine intelligence to tell if customers actually want something sweeter or less sweet,” Cui said. “We want to make it more human.”

Shelby Job, junior in LAS, has been a supervisor at the Illini Union Starbucks for two years. She agrees that giving the machine specialized order capabilities and more customer connections are important concerns.

“If they could give the robot a face, if they actually have a pre-recorded message, maybe that’d resolve that issue,” Job said.

Most of all, Cui said he wants to thank the University community for all of their support. He is especially grateful that customers share his vision.

“People actually come to the machine and say, ‘Wow! The future is here!’ and they look at our logo, ‘Oh! Yummy Future,’” Cui said.