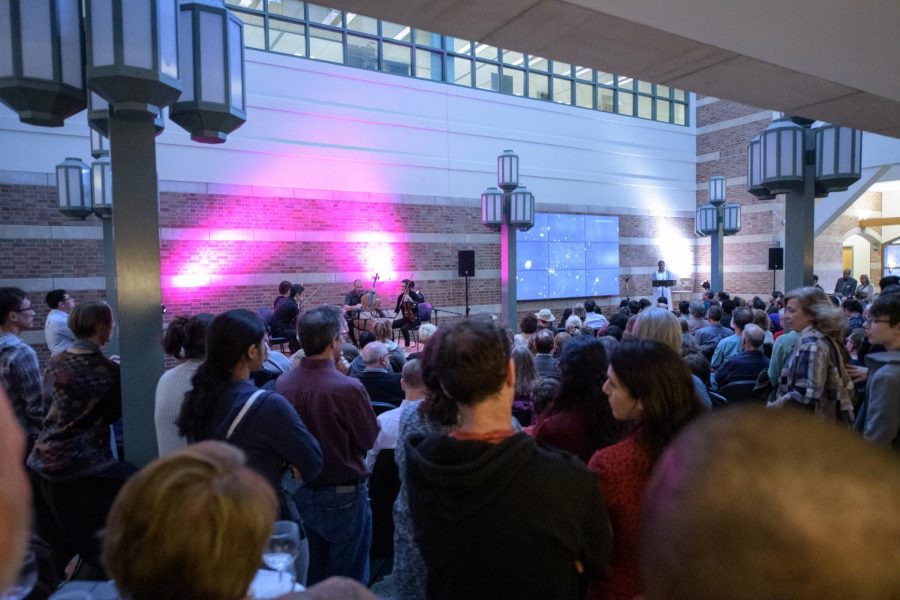 Quantum Rhapsodies at the Beckman Institute, on Wednesday.

An interdisciplinary performance called “Quantum Rhapsodies” combining art and science premiered at the Beckman Institute for Advanced Science and Technology on Wednesday.

The performance included quartet music, a fire juggler and a scene called “Alice in Quantumland.” The Jupiter String Quartet, professor Smitha Vishveshwara, Beckman Institute researchers and visualization experts, Protagonist Pizza Productions, theater-maker Latrelle Bright and the students of PHYS 498 ART: Where Art Meets Physics created and performed the show, according to the website.

McDonough said the performance was unique because it brought together music, visuals and narration to tell the story of quantum physics. He said the performers rendered certain themes in the quantum world, such as power, energy, mystery and wonder, in more abstract ways.

“While the visuals and narrative were often more specific or instructive, the music’s purpose was to conjure the spirit and feeling of the text,” McDonough said.

Smitha Vishveshwara, professor in Engineering and creator and guider of “Quantum Rhapsodies,” said although she is a physicist, she also has a passion for art.

Vishveshwara said while accuracy is very important in science, it can still be explained and shown in a poetic way.

She collaborated with Bright for a piece of theater work last year called “Quantum Voyages,” a show about two voyagers guided by the spirit of wisdom while exploring the quantum world. She said “Quantum Rhapsodies” was a performance parallel to “Quantum Voyages.”

“To bring (the quantum physics phenomena) alive in all these artistic ways, I felt that there’s a lot can be conveyed and understood,” Vishveshwara said.

Jose Vazquez, artist working in the Visualization Laboratory at the Beckman Institute, said taking part in “Quantum Rhapsodies” as an artist was an interesting and great experience.

Vazquez said art can help people open up their minds, and science can help people explore the facts. The combination of these two parts can be a great fusion to understand the beauty and concepts behind reality, he said.

Vishveshwara said music can be abstract because the narrative of music has no words, but it can have an immediate human connection to tell people the story of cosmos and the world of quantum.

She also said combining art and science is important because the combination can help people think in a diverse way and break the boundaries of different fields.

Vishveshwara said it is an incredible way to look at various concepts from outside the world and enhance creativity.

“(‘Quantum Rhapsodies’ is) a very alternative way for students to experience science, comparing to what you were fed in a class,” Vishveshwara said. “As you can see, we don’t shy away from giving the actual descriptions, (but) in the meantime, it is not just the education. It’s actually through the music and the visuals transporting you to the quantum world.”