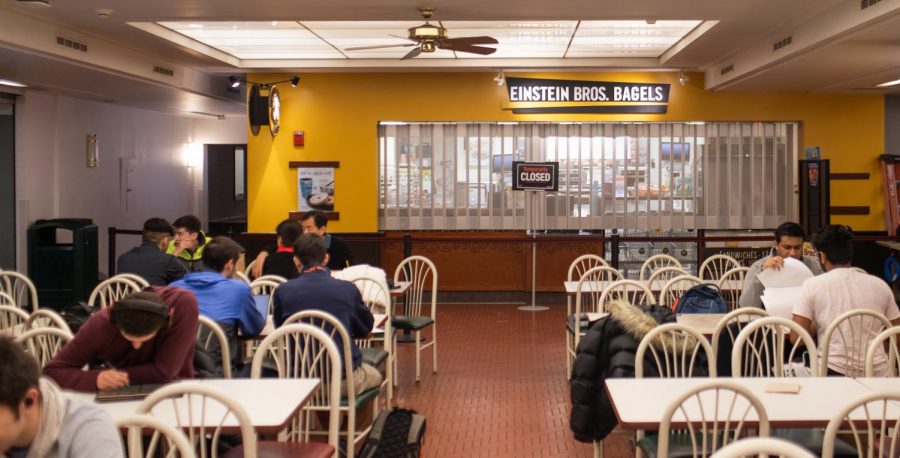 Students sit outside of Einstein Bros. Bagels on Thursday afternoon after an electrical fire earlier in the morning.

An electrical fire erupted at Einstein Bros. Bagels, located in the basement of the Illini Union, around 6:30 a.m. Thursday.

The fire alarm went off at 6:15 a.m and an Illini Alert was sent out at 6:31 a.m. advising people to evacuate and avoid the general area.

Another Illini Alert was sent out around 7:30 a.m. indicating the fire had been put out. However, the basement remained closed.

At around 8:30 a.m., the basement opened for employees only. The Illini Union went back to regular operations at around 9:30 a.m.

The severity of the damage is still under investigation.

“(We) don’t have a damage estimate yet, but it was confined to a backroom of the Einstein Bagel restaurant … But the actual fire damages contained to one storage room in the Einstein Bagel,” said Robin Kaler, University spokeswoman.

The building was evacuated until the area was confirmed safe.

All restaurants, with the exception of Einstein Bros., were expected to open no later than noon.

Kaler said she was relieved everything worked out with no serious incidents or injuries.

“The Illini Union is the heart of the campus and we’re really delighted that all the fire suppression systems, alert systems, all the people who respond did everything they should,” Kaler said. “We’re just really glad the Illini Union is in good shape and that no one was hurt.”