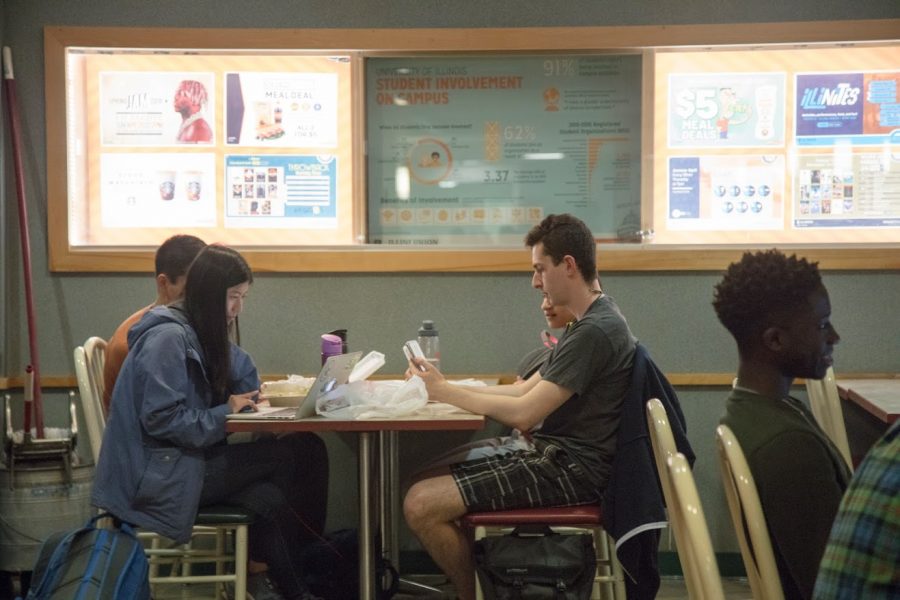 Students at the basement of Illini Union Tuesday, eating lunch and working.

Some people may spend their mealtime scrolling on their phone or watching television; however, a study revealed families spend nearly half of their time distracted during meals.

The researchers sampled 109 families living within a 50-mile radius of the study site, and the children’s age within these families ranged from 18-24 months old.

Throughout the duration of the study, parents gave consent to be video recorded during their mealtime. These recordings predominately took place during the evening, and on average, family mealtimes lasted roughly 17 minutes.

The purpose of this study was to observe the presence of the fathers’ effects on mothers and how this affects their levels of responsive feeding. Responsive feeding refers to the actions of the individual adult — mostly mothers — and how they attend to their children.

“What we were investigating was father’s effects on mothers, not really on children,” Saltzman said. “The most interesting thing that they found was … the effects of fathers on mom’s responsiveness. It was really showing that dads are important. They play a role in making sure kids are fed.”

Although the father’s presence does play a crucial role in family mealtime, Saltzman does not want single or divorced mothers to be viewed with a negative perspective.

“I really want to focus on the positive effects as much we can because too much research focuses on the negative, and that is stigmatizing and that is not the message we want to get across,” Saltzman said.

Kelly Uchima, project coordinator for the Family Resiliency Center at the University, was also involved in the study. She highlighted the importance of an involved father during family mealtimes.

“From a personal and a research standpoint, (it’s) very important, especially if there is a father type of person present … in the mealtime, because you can tell a lot with the way that the child is being raised and what’s going on when you’re watching a mealtime just in itself,” Uchima said.

Although the study was predominately about a father’s effect on mother’s mealtime responsiveness, Uchima mentioned how a family with higher interaction levels can positively impact children.

“If people are more mindful and present during, before and after these meals, I think a lot of times, that is (associated) with having a more present healthier lifestyle,” Uchima said.

Uchima advised how families can ensure they are getting healthy levels of interaction with one another during family mealtime.

“Definitely no screens … and just being with each other … and having a more mindful, involved conversation surrounding food and (the) preparation of food I think will be much healthier and educational,” Uchima said.