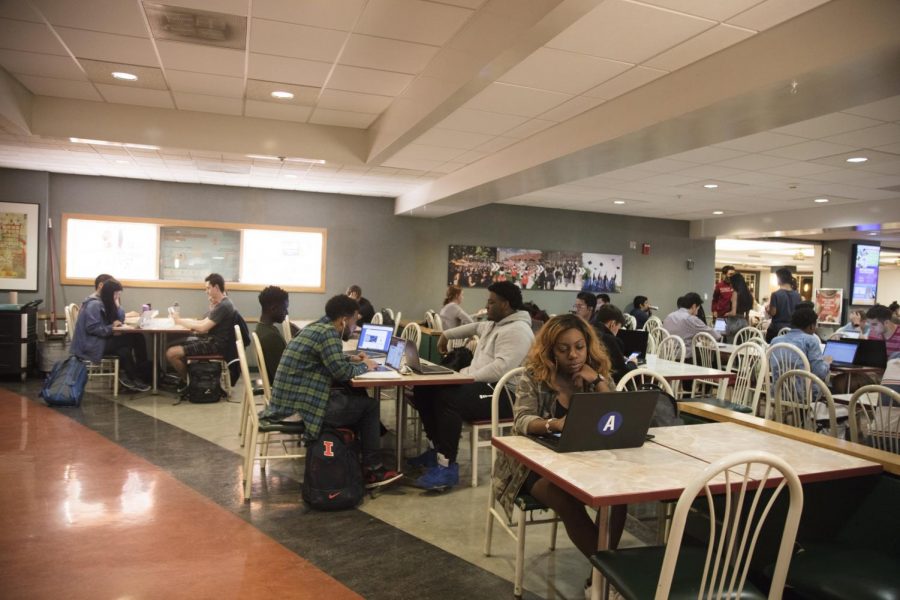 Students in the basement of the Illini Union on Tuesday. In light of recent concerns about security of internet-connected devices, the state of Illinois has passed new legislation banning manufacturers from collecting audio without consumers’ consent. This new bill will calm the public’s fear of invasion of privacy.

The state of Illinois has passed a bill that attempts to ban Internet device manufacturers from collecting audio from internet-connected devices without consumers’ consent.

On April 10, the Illinois Senate passed the Keep Internet Devices Safe Act. Essentially, if consumers know they are being recorded without their consent, they can sue companies.

However, the wording of the bill underwent some changes while it was in the Senate due to lobbying by trade groups led by the Internet Association. These groups represent big companies such as Amazon, Microsoft and Google.

Before the bill changed, it allowed users to file complaints to the Illinois attorney general’s office that could lead to penalties of up to $50,000 for privacy violations. However, the Internet Association objected and claimed that the Senate’s definition of a “digital device” in the bill was too broad.

In its current form, the bill only allows the Attorney General to enforce the act. Consumers are not allowed to create class action lawsuits on their own if the bill is passed by Illinois’ House of Representatives.

Tarek Abdelzaher, professor in Engineering, said in an email that he hopes this new bill will calm people’s fear about their devices tracking them.

Abdelzaher said the bill intends to protect consumers from being recorded by a microphone on their digital devices without their prior consent. This applies to phones, chatbots and home controllers, such as Amazon Echo.

“The overall intent is to improve privacy. It is a bit creepy to think that Alexa, Siri, Google Home or other such devices are listening in on you and using your data somehow (perhaps to push ads to you that you might be interested in, because of an overheard conversation you had). Gmail already does that with written text. The machine reads your mail and adjusts your ads accordingly,” Abdelzaher said.

Abdelzaher believes the new bill will not affect big companies. He thinks the biggest change people will see is the terms of use agreement and privacy policy people are required to sign when they install software.

“Today, when I download apps to my phone, they ask for access to this or that device (like my camera, microphone, location, etc),” Abdelzaher said. “ I have to say ‘yes’ or the app won’t run. If the app really needs to record something, it will just ask me to consent to it when I install it, or it won’t run. It’s like cookies. Now many websites inform you of their cookie policies and ask for your consent.”

“In terms of mobile service, I believe the National Security Agency will continue to watch and listen in the name of safety, which is still an invasion of privacy irrespective of the intention to ‘keep Americans safe,’” Shekara said.

Abdelzaher said the recording itself is not the problem, but it is the trust people have with new and advanced technology.

“Do we trust (and approve of) the purpose of recording? Today, we give our credit card numbers to total strangers every day when we pay for purchases,” Abdelzaher said. “Tomorrow we’ll trust our phone with audio recording as long as we get something out of it, like a better travel recommendation or maybe advice on homework.”