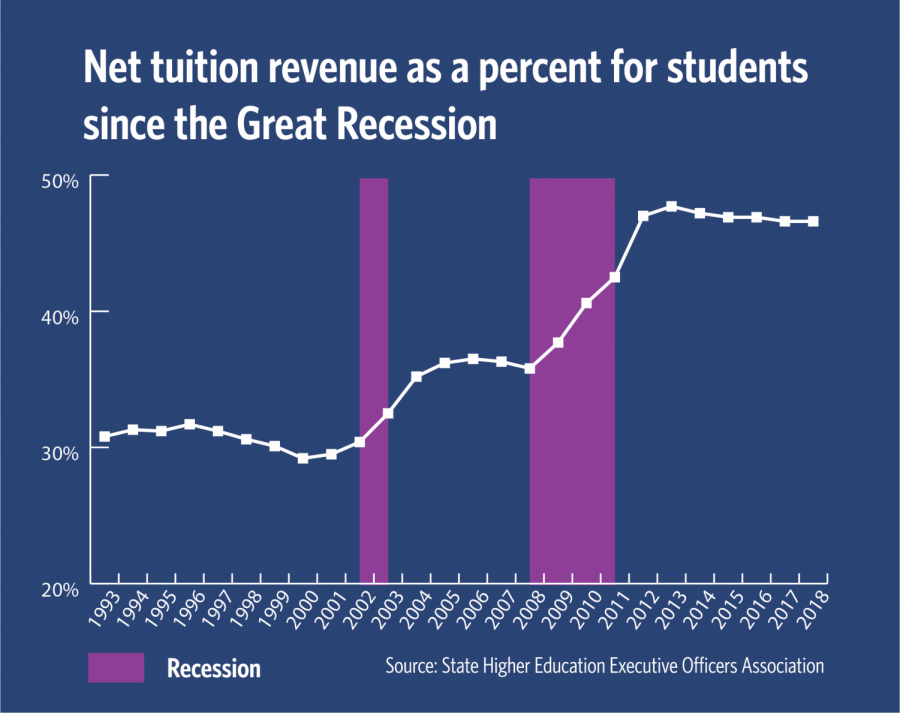 After the Great Recession in 2009, several universities across the United States are still recovering from the economic decline. A recent report has broken down the aftermath of higher education funding allocated throughout the nation.

Sophia Laderman, senior policy analyst at SHEEO, said in email the primary goal of the SHEF Report is to assist state higher education agencies in their abilities to inform financial policies in their states.

“The SHEF Report is widely used by researchers, and we aim to provide publicly available, comparable, long-term data for higher education finance,” Laderman said. “This type of information is not available anywhere else.”

Jennifer Delaney, professor in Education, is a member of the advisory committee for SHEEO and gives technical advice toward organizing the SHEF Report every year.

Delaney said for many states, education is the largest remaining income for several institutions.

“The funding levels since the Great Recession have not rebounded since 2008,” Delaney said. “Many states have seen an increase in enrollment; however, we are still far behind.”

Heitor Almeida, professor in Business, said there are not many financial tips he could recommend for universities if a Great Recession occurred again.

“There is not a possible way to prepare against another Great Recession since it affects everyone,” Almeida said. “You can’t really insure yourself against the Great Recession.”

Figure 3 in the SHEF Report shows a 25-year growing reliance on net tuition as a revenue source, which is called the “student share.”

Laderman said the trend line also shows a sharp increase in student sharing during the recession, as state funding declines and tuition increases to make up for the difference.

“In the next recession, we will very likely hit a 50% student share,” Laderman said. “The student share varies a lot from state to state. In Illinois, students are responsible for 35% of total revenue at public colleges and universities.”

Delaney said the University experienced a period of time where state funding fell to zero and several grants were not funded.

“(Monetary Award Program) grants were not funded which impacted a lot of students,” Delaney said. “Those students were bringing that grant every year to the institution. We were losing money from that and state funding.”

Laderman said she believes many colleges, if not able to raise tuition rates, would struggle if their funding was cut even further.

“If the next recession is as severe as the Great Recession, I would be very concerned,” Laderman said. “Institutions would not be able to raise their tuition rates again to make up for declines in per-student state funding.”