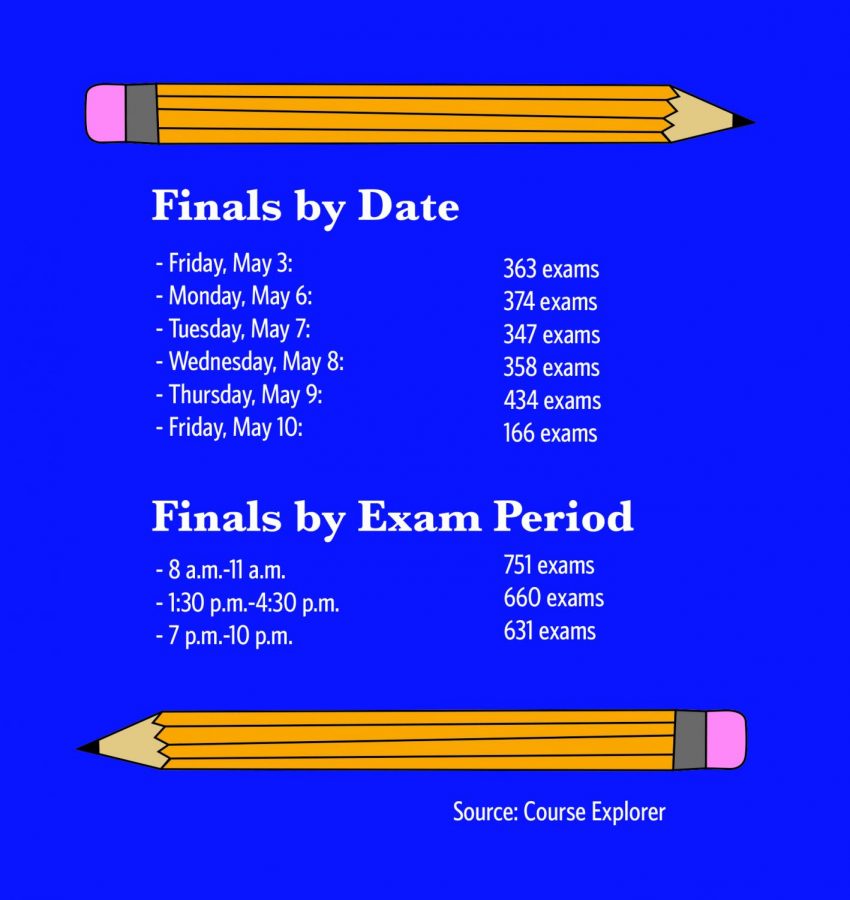 Terry Free and Chase Driskell are office administrators for Facility Management and Scheduling in the Office of the Registrar. As event specialists, the final exam schedule is one of their primary responsibilities.

The whole FMS department is not much bigger; associate registrar for FMS, Kristin McMurray, came up with a figure on the size of her entire department after a quick roll call in her head.

“(There are) seven total including me, but we’re down a person right now, so six,” McMurray said.

FMS handles the usage of all 325 general-purpose University classrooms. Anything that passes through classrooms — academic catalog or event-related — goes through the FMS team.

To FMS, an “event” is anything that occurs in general assignment classrooms untied to a course reference number. Midterms and final exams, RSO meetings, outside lecturers, office hours, movie showings and stage requests run through the two-person team of Free and Driskell.

Free and Driskell assemble and push out the final exam schedule over the course of eight weeks. Two weeks prior to the start of semester, FMS sends a mass email to all instructors asking if their class will hold a traditional pencil-and-paper final exam.

After four weeks of follow-ups, they filter out non-exam classes and begin coordinating special requests with over 90 department schedulers.

Special requests are alterations to typical exam conditions. Most special requests come for larger classes that need a combined exam space for all sections or enough room to fit a seat between each test-taker, Free said.

Using a manual approach to handle special requests; Free prints out Excel spreadsheets of the final exams and assigns spaces by hand. Free said there are too many factors to consider, such as location concerns or multiple exam rooms which require human decision-making.

“The basic functionality of how things work in itself has not undergone substantial change in decades,” Free said.

Just like when Free attended the University in the 1990s, finals schedules start with the semester’s non-combined scheduling guidelines, known to FMS staff as “the grid.” For every standard class start time, there is a randomly generated finals period the class can default to.

Some exam times always switch due to special requests, but most finals occur in the exam period the grid gives them. Special requests rarely come from departments due to exam difficulty, Free said.

“If it just so happens that the Intro Physics class and Intro Chemistry class that this certain set of people have to take are back to back, it’s just like ‘buck up,’” Free said. “Not to be mean spirited, it is what it is.”

According to a recent survey by The Daily Illini, 84.3% of 51 student respondents have between two to four final examinations this semester. Only 17.6% reported that their two toughest exams will happen on the same day, while 54.9% have all their exams on different days.

Free said they hope to add programming language to account for online finals without set times.

Likewise, students that call the final exam helpline from 7:30 a.m. to 7:30 p.m. to address exam room questions will likely hear from Free on the other end.

With the finals schedule posted back in February, FMS’s main concern is helping out students the best they can during this stressful time, McMurray said.

“There are support services available if they’re feeling stressed or if they don’t know their rights as outlined in the Student Code. We’re here to help interpret that,” McMurray said.