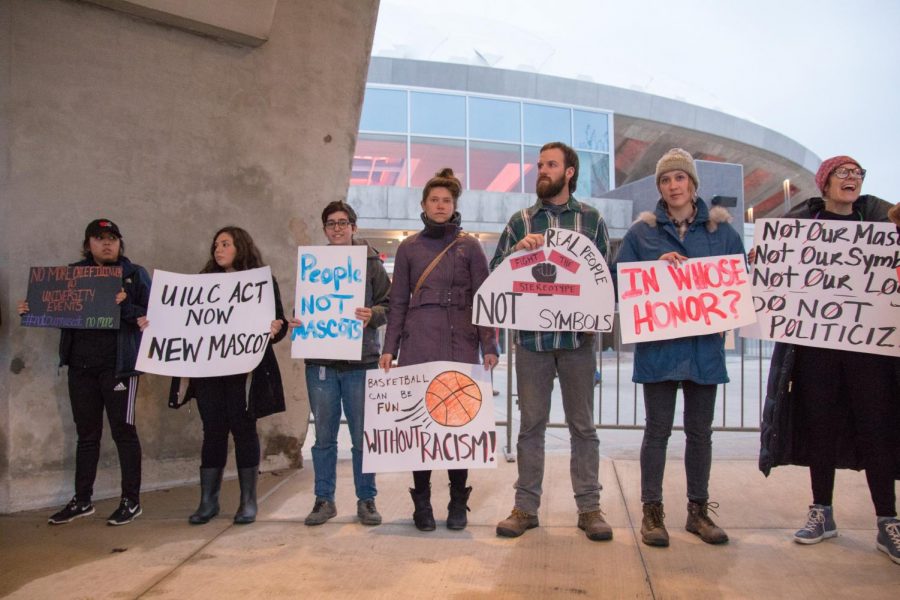 Protesters of Chief Illiniwek gather outside the west entrance of State Farm Center before the basketball game against Purdue on Feb. 22.

The Chancellor’s Commission on Native Imagery: Healing and Reconciliation released its report to provide suggestions on how the University can create a path forward with the retirement of Chief Illiniwek.

The report suggested holding a public event for the recognition and commemoration of the history, intent and impact of Chief Illiniwek to act as a formal and public retirement of the tradition.

It also called for a collaborative and transparent process involving key stakeholders in identifying new traditions such as “music, symbols, branding, marketing or a mascot that do not rely upon Native American images or traditions.”

The report cautioned creating a “clear distinction between the establishment of a university symbol and the creation of a mascot.”

The report also suggested the development of a historical account documenting the Chief Illiniwek tradition, from its origin to its retirement in 2007 and “the ineffective implementation of that decision, resulting in years of division and strife.”

Additionally, the Commission suggested the creation of a plaque or monument outside Memorial Stadium that commemorates the history and original intent of the Chief. It also recommended a web-based and University-curated “content space” to be placed in a prominent campus location of an illustrated and annotated history of the Chief Illiniwek tradition.

The report also called for the establishment of a Native American Liaison Officer within the Chancellor’s Office to act as a voice for Native American organizations and tribes. It also suggested dedicating a site to the Native American tribes who once lived on the land which the University now resides in.

It also recommends partnering with representatives of the Peoria Tribe of Indians of Oklahoma, American Indian Center of Chicago and the Native American & Indigenous Student Organization to help implement events and resources that recognize Indigenous heritage in Illinois.

The commission was established in the fall and held monthly meetings between November and April to explore institutional strategies the University could implement to help the community recognize and move forward from the Chief Illiniwek tradition.

The commission presented its recommendations to Chancellor Jones and provided a draft report in May.

The commission comprised of 14 members representing the experiences of students, faculty members, staff, alumni and athletics, including indigenous University stakeholders and former portrayers of Chief Illiniwek, the report stated.

“Their frank and open discussions and their careful consideration of the opinions and viewpoints expressed by University students, faculty, staff, alumni and friends led to observations and advice that will be extremely helpful as I determine our next steps,” Chancellor Jones said through Massmail.

Members also considered perspectives raised in community-wide conversations from last spring and the more than 2,000 informal online survey responses on the impact of the portrayal of Chief Illiniwek.