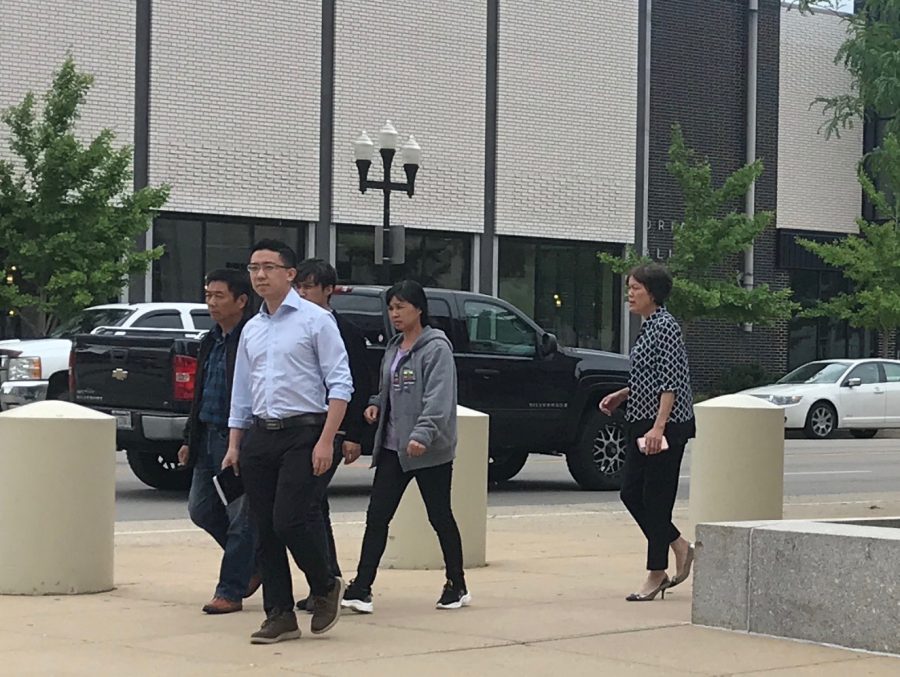 Leaving the courthouse Wednesday, members of Yingying Zhang’s family walk behind Zhang’s fiancé, Xio Linhou who she planned to marry in October 2017. Opening statements began Wednesday morning following the testimonies of nine witnesses brought in by the government.

Christensen could face the death penalty if he is found to be guilty. Charges against him include kidnapping resulting in death and two counts of false statements.

Taseff said Christensen is “on trial for his life” and asked the jury to consider the circumstances around the evidence. The defense claims some factual errors in statements made by the government.

Preceding the defense’s opening statement, Eugene Miller, prosecutor for the United States, made his opening argument, restating multiple times that “(Christensen) kidnapped (Zhang). He murdered her. He covered up his crime.”

Miller also referenced recordings from the memorial service held for Zhang on June 29, 2017, where Christensen’s girlfriend wore a wire to assist the FBI. In these recordings, Christensen can be heard bragging about what he did to Zhang and talking about the vigil itself.

“I Just wanted to see how many people were here,” Christensen said at the vigil in 2017, according to the recording. “They’re here for me.”

The jury will get to use headphones and transcripts when seeing this evidence.

During the memorial service, Christensen told his girlfriend that he had 12 other victims and Zhang is the first one that links evidence back to him.

This evidence, however, is what the defense says cannot be proven as there is “not one shred of evidence” to link Christensen to any other cases. Taseff also mentions that Christensen had been drinking and has been dealing with alcohol and substance abuse for quite some time.

As they continue through witness questioning, Taseff asked the jury to consider all the evidence in order to get a comprehensive understanding of the case.

“Keep your heart and your mind open to all that you will hear,” he said to the jurors.