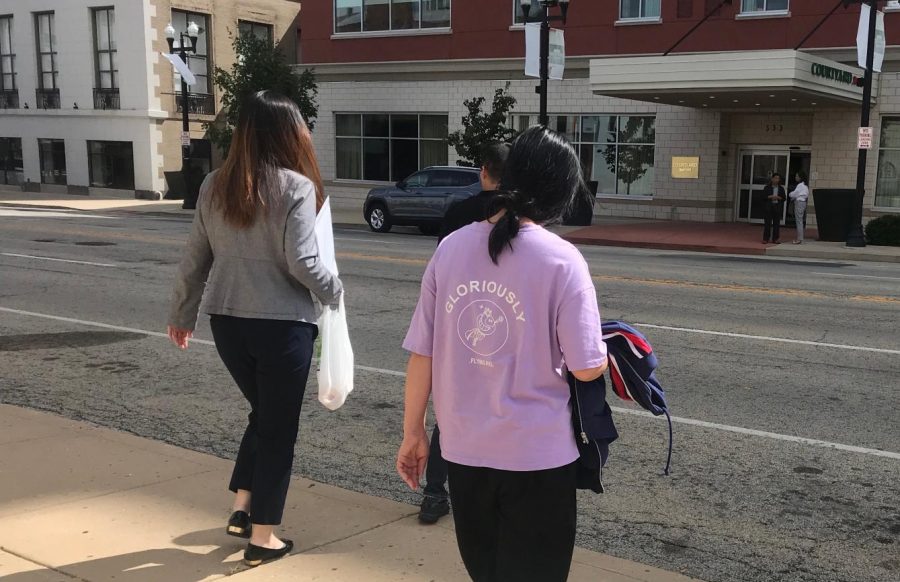 Lifeng Ye, Yingying Zhang's mother, walks out of the courthouse in Peoria on Monday. Lifeng Ye testified via video last week about how losing her daughter has affected her life.

Kind, gentle, polite and well-behaved. These are all words used to describe Brendt Christensen, the accused kidnapper and killer of University visiting scholar Yingying Zhang, in court on Monday.

Taking the stand for the defense on Monday were correctional officers from the Livingston County Jail, where Christensen was held from September 2017 to May 2019, the jail’s superintendent and more members of Christensen’s family.

Christensen was convicted of kidnapping resulting in death in late June. Yingying was last seen in June 2017 and has been presumed dead by the FBI; her body has also not been found.

Yingying’s father, Ronggao, and brother, Zinyang, were present during some portions of trial Monday.

At Livingston County Jail, there was only one reported incident where Christensen received a ticket, a written report that could start the disciplinary process and cause loss of privileges, segregation or other possible sanctions.

A stinger is a homemade device which is used to heat up food or water and made from a piece of metal that is stuck into an electrical outlet, said Stuart Inman, the superintendent and first witness who testified on Monday.

Although Christensen received a ticket for this incident, he was not reprimanded and didn’t receive any sanctions nor lose any privileges.

On cross examination, prosecutor James Nelson asked Inman about the living conditions and privileges in the jail, suggesting Christensen had every incentive to be on good behavior.

In the dorms Christensen was living in, detainees had things such as their own phone, individual shower facilities, the ability to video chat and access to televisions.

Additionally, Inman said he once interacted with Christensen regarding a grievance about books. Each detainee is allowed no more than three books at a time because they can create a fire hazard.

During a shakedown or search of Christensen’s things, more than three books were found. However, no ticket was given for this incident.

Another witness, correctional officer Nicolas Melvin said one of his interactions with Christensen was about books he was reading, particularly, “Goosebumps.”

Nelson, on cross examination, asked Melvin if he was aware Christensen was also reading books about demonology and cults. Melvin answered “no.”

The defense objected to this question and information and requested a mistrial because substances of Christensen’s YouTube playlists, library and other materials were already not permitted to be mentioned. Additionally, they argued Christensen has a first amendment right to read or listen to whatever he liked.

The government argued, though, the defense invited this information into evidence when asking Melvin about the “Goosebumps” books.

The mistrial was denied, and no instruction on whether or not the jury should consider this evidence by Judge James Shadid has been made about this. As of now, the jury may still consider it as is.

In addition to Melvin and Inman, two other correctional officers were questioned, along with the sergeant at Livingston County Jail.

One of the officers, Patricia Peraz, wrote the ticket for the stinger incident.

On the stand, there were officers who worked both day and night shifts and could say Christensen was well-behaved.

“I never had a problem with him at all,” said Donald Nilas, correctional officer at the jail, regarding Christensen.

The Christensen and Williams families

After an extended lunch break the jury continued to hear from family members who know Christensen.

Kurt Williams met Christensen’s mom, Ellen, in 2015, and they married in 2017. The only time Kurt ever met Christensen was in June 2016 at a farmer’s market in Madison, Wisconsin.

Kurt recalled being pulled aside by Christensen and being thanked by him for being in Ellen’s life, saying it was the happiest he had seen his mother in a long time.

While waiting for Ellen Williams to step onto the stand once Kurt stepped down, Christensen appeared to be crying and wiping tears from his face, though he frequently had his head down.

Ellen talked about her life with Michael Christensen, her divorce and her most recent marriage.

During her testimony, home videos were played for the courtroom, starting with a video of one of Brendt’s birthdays as a baby. Brendt was seen smiling while watching these videos.

Videos of him in his crib, playing piano and holding his younger sister as a baby were other clips shown.

Ellen also talked of Brendt’s night terrors and other incidents, such as when he jumped from the house’s upstairs deck to the downstairs deck and then ran into the street when he was 15.

“I always thought he was delirious from his fever,” she said, as Brendt was home sick the day of the deck incident. “Until later (I) find out he might have been trying to harm himself.”

When asked about the Zhang family and the crime Brendt committed, Ellen said, “It’s sad.”

“I think about (the Zhang family) at least five times a day,” she said. “How horrible it must be for them.”

She still has unconditional love for Brendt, as well as her other children, and nothing will diminish that, she said.

Andrea said Brendt was a very gentle kid and wasn’t the kind of man to raise his voice at anyone. When Brendt moved out to live with his wife in Madison, Wisconsin, Andrea was 13.

Growing up, Andrea said the relationship between Ellen and Michael was tense and described Ellen as being emotional and noticeably drunk around the house.

Ellen said she started noticing symptoms of depression and anxiety sometime in the 1990s, dealing with alcoholism later on, too. However, she has been sober for almost two years now.

Having her own struggles, Andrea moved to Seattle and kept minimal contact with her family, contacting Michael the most, until she moved to Texas, where she has lived for over the past three years. She has been unable to be present for other portions of the trial because of her work and travel time from Texas.

Prosecutor Eugene Miller, on cross examination, brought up the fact the United States Marshal pays for travel and lodging expenses for testimonies.

However, when asked by defense attorney Elisabeth Pollock if the U.S. Marshal pays for Andrea’s salary when she’s away from work, Andrea said “no.”

Andrea said right before Brendt got arrested, she decided she wanted to reach out to him, as she was starting to feel OK again.

After hearing about Brendt’s arrest, she said she felt sad he was struggling enough to do this.

Like Ellen, Andrea said she still loves and supports Brendt.

“Nothing changes my love for him,” Andrea said.

The defense is expected to rest their case on Tuesday, which will then allow for the government to bring in any other witnesses for a rebuttal.

Closing statements are expected Wednesday morning. The jury will then deliberate and decide whether Brendt should serve a life sentence without the possibility of parole or be executed.