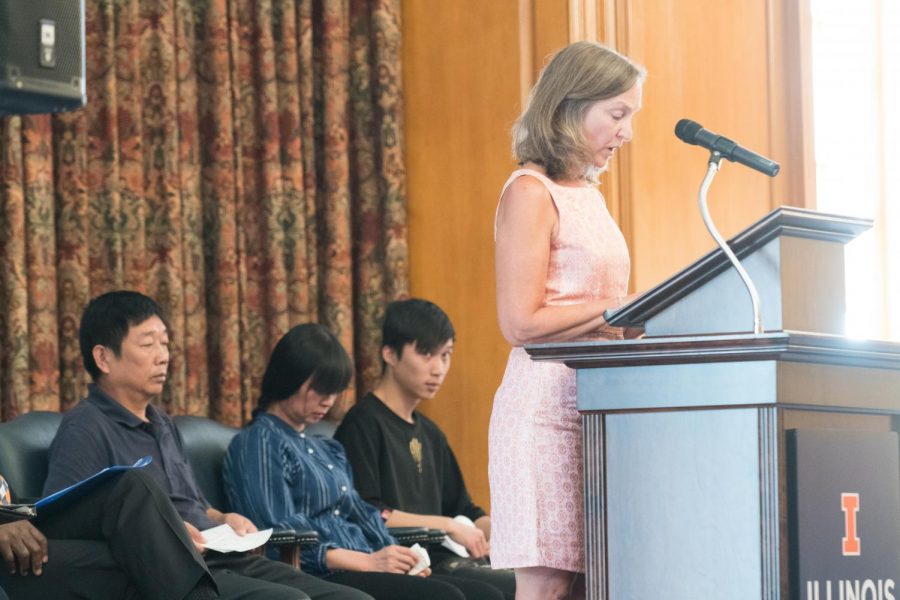 Robin Kaler reads Ronggao Zhang’s statement translated in English. The Zhang family and members of the University faculty attended a press conference Monday in order to honor the establishment of Yingying’s Fund.

Yingying Zhang was smart, beautiful and kind. She was also always willing to help when she saw others were in need. That is what her family said about her Monday at the official establishment of Yingying’s Fund.

It has been two years since Yingying went missing, and now to honor her memory, a permanent endowment fund has been set up in her name through the University of Illinois Foundation that will be used to help international students and their families when they face crises.

“We have set up Yingying’s Fund, on one hand, because Yingying was always willing to help others when they were in need; we want to act in that spirit,” said Xinyang Zhang, Yingying’s brother on behalf of Xiaolin Hou, Yingying’s fiance. “On the other hand, we want to do something that can give back to this campus community and the people who have helped us.”

Hou was not able to be at the press conference on Monday due to his new teaching position he started in China.

Through tears and grief, Xinyang gave the statement in Chinese, which was then translated by the family’s attorney Steve Beckett.

Through Xinyang, Xiaolin explained how he and the rest of Yingying’s family first thought she was lost, to finding out she was kidnapped and “murdered in an extremely cruel manner.”

“Over and over, we have had to face mounting problems and feel that we have gone step by step deeper into the abyss,” he said.

However, he said they have never thought of giving up.

“Our strength comes from our love for Yingying, and also from the continuous support and assistance of so many good and just friends,” he said.

Xiaolin’s statement said he hopes in the future, international students and their families will be able to receive the needed financial support when faced with emergencies. He said he hopes it will help these families not feel as helpless as Yingying’s family when first arriving in the United States.

Ronggao Zhang, Yingying’s father, gave a statement as well. As his statement was also read in Chinese, it was translated later by University spokeswoman Robin Kaler.

Ronggao touched on the helplessness Xiaolin mentioned as well.

“Champaign is 7,000 miles away from our home; we didn’t know who and where to ask for help,” Ronggao said. “Then, when we arrived, there were so many people from the University and local community who helped us.”

The Zhang family was assisted in finding a place to stay, getting meals, arranging rides and getting legal and financial advice.

“If it was not for the kindness of these individuals, I cannot imagine how we would have been able to face all these challenges,” Ronggao said.

He went on to say that the family’s sadness and grief for Yingying will never go away and he hopes that no other family will ever have to experience such a tragedy.

“However, we know there will be other international students and families facing hardship and loss, when they are far away from home,” he said. “It is our hope that this fund will offer some support and help when they are dealing with an accidental and urgent situation.”

The Zhang family made the initial gift to Yingying’s Fund and, as of Monday, $57,000 has been raised by 479 people.

Jones, Young and Mabokela all separately thanked the Zhang family for their initial gift.

“I want to thank all of those that have already made a gift to ensure the Yingying legacy at Illinois will be one of service, aid and hope to international students who join this University community,” Jones said at the start of the press conference.

Young said Yingying’s Fund will keep her spirit with the campus and is a way to honor her memory and her family. The fund will be able to provide international students assistance and care they need to grow and evolve.

“Thank you for allowing us to be a part of Yingying’s family and story,” she said. “We are extremely honored to have been a part of her life and deeply committed to supporting international students and their families during their time at Illinois.”

Mabokela also added the international student population is “a great source of pride” for the University. She said this fund will not only support students and their families in times of crisis but will also “serve as the living tribute of Yingying’s life and accomplishments.”

The Zhang family’s biggest wish still is to bring Yingying back home. Ronggao said he hopes others will consider making a donation and said he and his family believe this is Yingying’s wish and “the best way to celebrate and honor her life.”

“International students will now have a special friend watching over them,” Jones said.