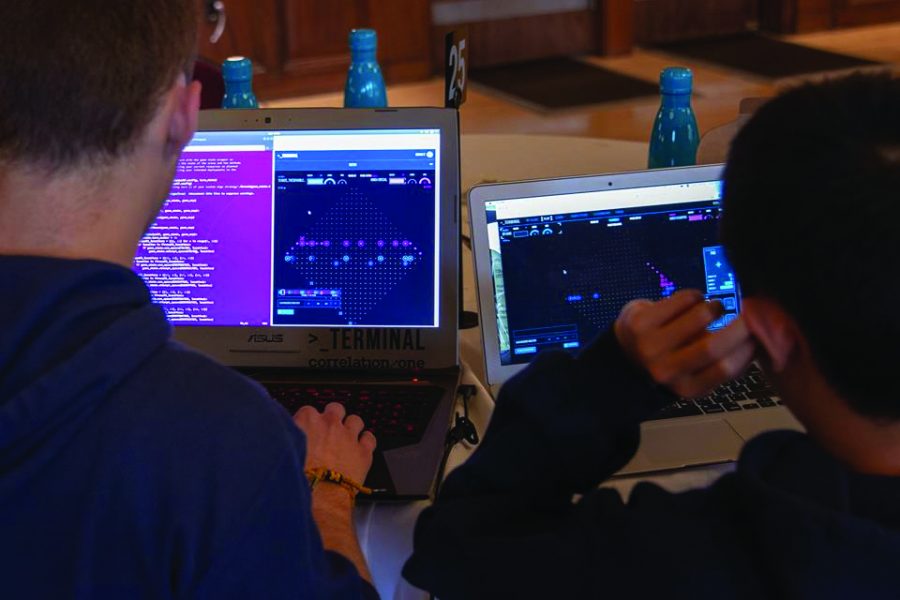 Photo Courtesy of Correlation One

Two students create code during a competition. At Terminal Live events, a team of students write code to compete in an online strategy game against other teams.

For many computer coding competitions, judges determine the winners and losers in private with predetermined criterion, which does not always allow the contestants to know why their code won or lost. However, a coding competition event coming to the University in September will allow competitors to show off their codes to each other.

The event, Terminal Live @ UIUC, is a hackathon-style event that will have students pair up in teams of three and create a workable, competitive code that will be used to compete head-to-head in a tower-defense-style game against other teams.

“It’s basically e-sports for software engineers. And it’s really a thrilling experience” said Andrew Strong, head of business operations at Correlation One, in an email. Correlation One is a company that helps other companies find quantitative and technical employees.

Terminal, the name used to describe the game itself, was created by Correlation One in response to how other coding competitions were run — that winners are determined by judges in private. Instead, once the competing teams have completed their code, they will be able to show off their creations to the other competitors in a tournament.

Strong said Terminal is much like chess in that it is easy to learn the basic rules but very challenging to master.

“The competition is mostly difficult, not because the game is hard, but because students have to compete head-to-head against their peers, who are just as smart, curious and eager to win,” Strong said.

While competitors at Terminal Live @ UIUC will mostly consist of University students, other students from Northwestern University, University of Chicago and Purdue University will also be competing.

Correlation One is partnering with Citadel to make the event possible. During the event, competitors will be able to network with Citadel representatives and have the potential to be recruited by Citadel.

Correlation One is also working with the University’s Institute of Electrical and Electronics Engineers. They have a history of working together in the past, as IEEE looks to Correlation One to provide data science competitions, while Correlation One looks to IEEE to help make its events possible.

Matthew Klock, junior in Engineering and member of IEEE, said they help advertise the event and make the event apart of the University’s culture. He said IEEE wanted to bring the event to campus because they think it is a great way to provide computer engineering students with a challenge.

“This is a great opportunity for people of all skill levels to expand and showcase what they know,” Klock said.

From a student perspective, Klock said the best way to prepare is to know how to play. He recommends going on the Terminal website and defeating the bosses available.

Applications for Terminal Live @ UIUC will be accepted until Monday at 11:59 p.m. Interested competitors will apply individually and then form teams among those that are selected. The competition will be held Sept. 14. The winning team will get $25,000 in cash.

“I expect to see some crazy algorithms this year and some great competition,” Klock said.