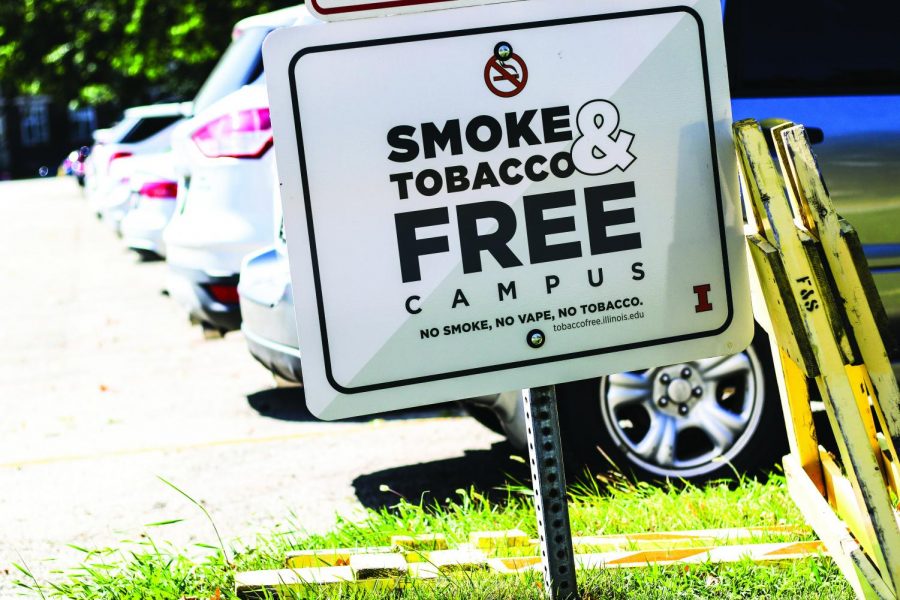 A smoke-free campus sign is displayed in parking lot E2 by the Architecture Building on Aug. 28. To combat the rise in popularity of smokeless tobacco products among college students, the University has revised its campus policy to include all tobacco products and vaping devices.

In a Massmail to University students, Chancellor Robert Jones announced the University’s smoke and tobacco-free campus policy is now officially in effect, banning all tobacco products and vaping devices on campus-owned property.

While the University has been a smoke-free campus since 2014, the chancellor announced last fall the policy would be expanded to include smoke-free forms of tobacco such as chewing tobacco, snuff and dissolvable strips and orbs.

“From an institutional perspective, since we now have a medical school here on the campus, as a role model nationally and worldwide in terms of good health, we felt it was important to add smokeless tobacco to the list of things we prohibited in our smoke-free policy,” said Michele Guerra, director of Campus Wellness Center.

Guerra said the extension was a logical progression of the policy based on increasing evidence of tobacco’s health hazards, regardless of the form in which it is consumed.

“From a public health perspective, as time has gone by, there has been more and more research adding to the concerns of just how deadly all tobacco and nicotine products, not just smoking forms, are,” Guerra said.

Guerra said a particular concern on college campuses is the vulnerable age when students begin using tobacco and developing addictions.

“We know that most people who use tobacco and nicotine products usually start sporadically in their teens and late teens and oftentimes develop what can be a deadly addiction that’s very hard to break by the age of about 26, so the traditional college years are a time when many people become addicted,” Guerra said. “We wanted to do what we could to encourage people to make healthy choices during that important time of life.”

Guerra said at a time when the use of vaping products has spiked among young populations, the University’s goal is to educate students that newer, more popular forms of smoking are far from harmless.

“Many people on campus mistakenly think that vaping is just flavored water, but it’s actually a very potent nicotine delivery system, and it has its own health risks,” Guerra said. “We’re going to be doing a lot of informational programming to get the word out.”

With the first death connected to vaping reported from Illinois, Cabral Bigman, associate professor in LAS who specializes in health communication, said it’s essential students are aware of the dangerous short-term effects of vaping that are harder to ignore.

“It is important to realize that the health risks are not just long-term,” Bigman said in an email. “If the University finds that there is a lack of awareness of health risks, then an educational intervention could be something to consider.”

Bigman said the lax oversight and relative lack of information surrounding the rapidly growing vaping industry has contributed to its rise as an alternative to other smoking forms.

“When compared to cigarettes, companies have been able to advertise and market vaping products without as much regulatory oversight,” Bigman said. “I believe that has contributed to the current trends.”

Sonali Kumar, freshman in Engineering, said regardless of campus policy or enforcement, there will always be safe havens for students to use tobacco or marijuana on or off-campus.

“You can just go to any place that doesn’t have as much University presence or an apartment where there isn’t an RA inspecting dorms,” Kumar said. “People can find a way to find devices or smoke no matter what.”

Katie Lamarche, sophomore in LAS, was also doubtful that the policy’s adjustments would affect the usage of tobacco, nicotine or marijuana among students.

“I can see where the policy is coming from, but at the same time, that’s not going to prevent (smoking) from being on campus,” Lemarche said. “I’ve seen people outside of the (Undergraduate Library) or the Main Library smoking anything from a Juul to a cigarette to weed.”

Bigman said even if changes are not immediately seen, more awareness will create a healthier campus.

“As with any policy, some people may try to get around it,” Bigman said. “However, enforcement of a smoke-free campus helps to promote the health and well-being of the campus, and contributes to population-based approaches that have been effective in reducing smoking.”