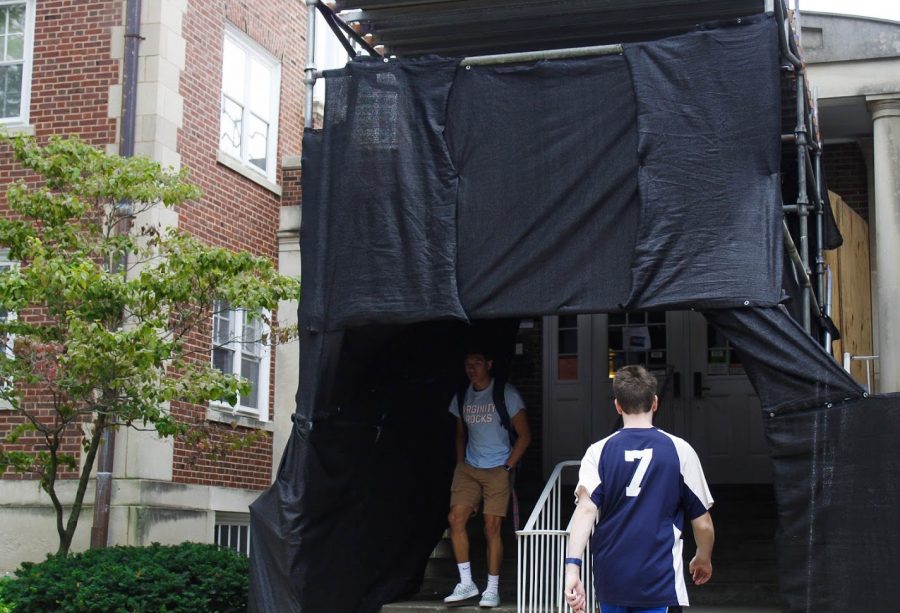 Male students enter and exit the Evans side of Busey-Evans Halld on Friday. This is the first semester where Evans Residence Hall will be all-male.

The historically all-female halls Busey-Evans went out of tradition, with Evans Residence Hall switching to all-male for the first time this fall.

The change comes with one of ISR’s residence halls, Townsend Hall, having to shut down for renovations as part of the ongoing ISR Renovation and Addition Project. The Project is entering its second year and is expected to be fully completed in August.

“This year, because of Townsend Hall going offline and the record enrollment of the incoming class, we are at capacity and many of our private certified housing partners are also at capacity” said Chelsea Hamilton, senior assistant director of Communications & Marketing for University Housing.

Historically, University Housing has not been full in capacity, but the Townsend Hall renovations meant there were over 600 residential spaces lost. Typically, 60% of Townsend Hall residents are male.

The Occupancy Management Team, which consists of University Housing staff members, made the decision for Evans Hall to go all-male last summer. The team took into consideration campus demographics and gender capacity within its residence halls.

“We know from Enrollment Management that more men are coming to campus, so it was really important we were able to house or have additional spaces for the men,” Hamilton said.

Another reason Evans Hall specifically was chosen to go all-male was because there were no further renovations that had to be made to accommodate male residents.

ISR residents are living in Wardall Hall this year, which is also expected to undergo renovations once Townsend Hall reopens in the fall of 2020.

Hamilton was unable to confirm whether Evans Hall will permanently remain all-male or revert back to an all-female dorm. She said it depends on the gender breakdown for upcoming school years and of potential upcoming renovations.

Alia Alicea, sophomore in ACES, lives in Busey Hall this year. She was living in Evans Hall last year when she received an email from University Housing stating she was unable to pick the same room for the next school year.

She said rumors started to spread around her hall going all-male. A few months later, her residential director confirmed it was true.

“I have mixed feelings about it because, in general, the rooms over in (Evans) are bigger than a lot of the other dorms,” Alicea said. “I had a corner room and it was a lot bigger, so I really enjoyed staying in that room, and I wanted to stay in that room again, so I was upset.”

“The fourth floor of Evans is, for the most part, all single rooms she said. A lot of us were bummed because a lot of us can’t get singles anymore.”

Busey-Evans resident advisers were unable to comment, because RAs are not able to handle press and communications directly related to University Housing.

“It’s a good size,” Nelson said. “I have space for everything. It’s overall a good place, it’s not huge, obviously, but it’s more than enough for what I need.”

Female residents who lived in Evans Hall were given priority as one of the first groups to choose their housing for the following school year. Like Alicea, many of these residents chose to live in Busey — the connecting hall that remains all-female.

Alicea said she and other female residents shared some concerns about the change to Busey-Evans no longer being all-female.

“A lot of us were worried because having an all-girls dorm was really nice,” Alicea said. “You never know a female’s reason for wanting to stay in an all-girls dorm. It could be for conservative reasons, cultural reasons (or) anything that could have happened to her before.”

To address some of these concerns, Hamilton said Busey Hall also houses non-visitation residents who live on a floor together where no males are allowed at any point in time.

Alicea said there was a feeling among returning female residents that Busey-Evans wasn’t going to be the same anymore. So far, however, she said it has been good, and she has only noticed a few changes.

“I did notice guys are constantly in the laundry room ironing,” she said. “They also don’t know how to keep up with their socks. In the laundry room, I’ve never seen so many single socks lost. It’s like, ‘How do you guys keep losing your socks?’”