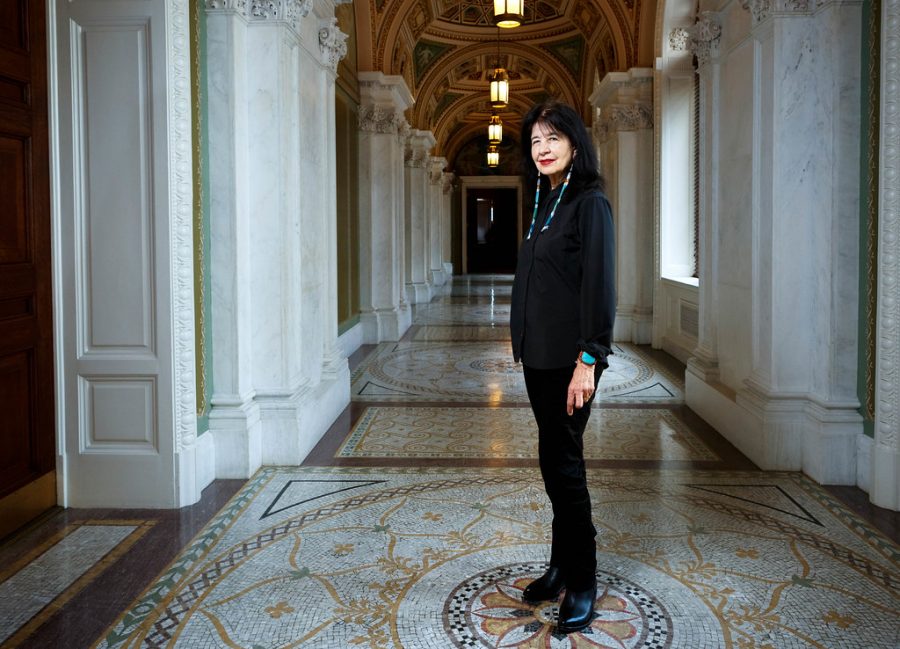 Poet Laureate of the United States Joy Harjo is pictured on June 6. Harjo is the first Native American to serve as poet laureate and is a member of the Muscogee Creek Nation.

Former American Indian studies professor and celebrated poet Joy Harjo will take up her duties as U.S. poet laureate for 2019-2020.

Harjo is the first Native American to serve in the position of U.S. poet laureate as a member of the Muskogee Creek Nation, located in her home state of Oklahoma.

On Sept. 19, 2020, Harjo will open the Library of Congress’ annual literary season with a reading of her work in the Library’s Coolidge Auditorium.

“My students love reading Joy Harjo’s poems,” said Robert Dale Parker, professor in LAS, in an email. “They love the combination of lyricism and commitment to justice, and they also love the way she combines poetry and history.”

According to the Academy of American Poets, U.S. poet laureates, a position the Library of Congress established in 1936, often engage in outreach programs and community projects that encourage greater national creativity and engagement with literature.

Parker said Harjo’s appointment reflects both the diversity America needs as well as the existing diverse voices in the field that deserve recognition.

“The study of literature today expands in many fascinating directions, and all of us who have worked with Joy and taught her writing know that she would be thrilled to see her poems and her new appointment as the poet laureate of the United States, inspiring Native (American) students and others to read and reread Native (American poets) and other poets, to face our complicated pasts and to build a more inclusive future,” Parker said.

Kirsten Peterson, senior in LAS, said she and many other students are desperate to seek courses and literature that offer more diversity.

“When teachers ask, ‘What made you want to take these courses?’ the general student response is, ‘All we ever read is white middle-aged wealthy men, and I finally wanted to hear from someone else,’” Peterson said. “This generation of students is definitely getting tired of the same voices over and over again, and we’re looking for diversity in literature moving forward in our studies of English.”

Peterson said the first step students can take to advocate for diversity is to call it out when they see a lack of it in the classroom or coursework.

“I’m currently in an early American literature course, and one of the questions that we asked yesterday was, ‘There doesn’t seem to be a lot of indigenous works in the syllabus for this semester. Is there a reason why?’ and we weren’t really given a reason,” Peterson said. “We’re conscious of that being lacking in some of our curriculum, particularly when we’re looking at American literature.”

Peterson said a lack of diverse perspectives in writing isn’t just apparent in the chosen course materials themselves, but also in how discussions surrounding the materials are constructed in class.

“I’ve had a class where we read ‘Pride and Prejudice’ and didn’t talk about any feminist components of it, only social aspects that naturally should overlap,” Peterson said. “I ended up writing a paper in a really angry format, calling out every single feminist interpretation you could have about the novel.”

Peterson said students communicating their frustrations in their own works is a great way to strongly advocate for more diversity and dialogue in their fields.

“Calling out the lack of focus on diversity and pointing out the racism in some pieces of literature in your own writing gives you an ability to communicate your frustration and explore these issues more on your own,” Peterson said. “Then, if you’re looking to become an English professor or just to have a better perspective when entering into these works, you already have a strong ground to build on and teach to other students.”

Parker said Harjo’s already existing impact on readers and artists from all backgrounds will only grow with her new position.

“There is a huge surge of Native American poetry right now — as you can see from a book like Heid Erdrich’s ‘New Poets of Native Nations’ — and so many Native (American) poets have long looked to Harjo for inspiration,” Parker said. “Now that she is the poet laureate of the whole United States, we can hope that many more readers will find her poems and will also find the poems of many other Native poets and of many poets from many histories that too many readers have overlooked before.”

Joy Harjo was unavailable for comment at time of publication.