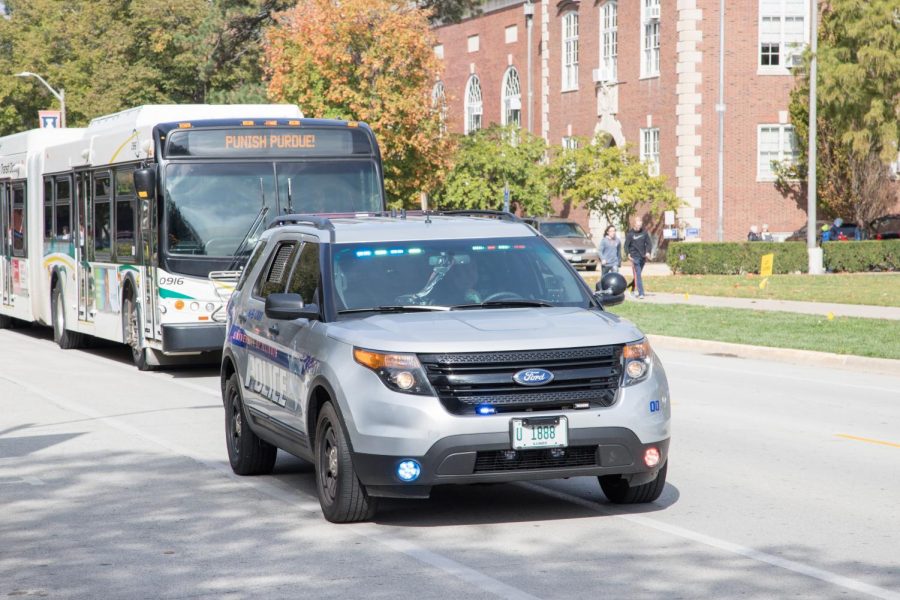 A University of Illinois campus police vehicle follows the Marching Illini as they march through the streets for Homecoming on Oct. 13. Craig Stone, chief of police at the University, said they have developed a reaction plan for threats of gun violence.

In light of recent public mass shootings in El Paso, Texas, and Dayton, Ohio, the campus community has called for more intervention. However, police are confident in the already existing emergency system.

Chief of Police at the University Police Department Craig Stone said though they have a developed reaction plan, the department is attempting to focus on preventative measures.

“We want to be able to prevent something from happening as opposed to having to respond to some type of crisis,” Stone said. “However, we are prepared to respond in any type of situation.”

Created in 2009 and most recently updated in October, the Campus Violence Protection Plan focuses on prevention of gun violence using teams and committees.

Parsons said an increase in gun violence in Champaign started in 2015. Since then, an organization called Champaign County Community Coalition has been working to identify and improve community conditions, particularly using a program called Fresh Start.

“(Fresh Start is) a program that works with individuals who are most likely to be involved in gun violence, either as a perpetrator or a victim, to work with them and encourage them to change their ways,” Parsons said.

Following the mass shootings in El Paso and Dayton, the FBI has received a 70% increase in tips from the public. This is how people should react, Stone said.

“We want people to call us if they see something that doesn’t look right, suspicious activity or someone who used to be engaging with friends and classes, but now they’re withdrawn, not participating and isolated,” Stone said.

The police force has a campus prevention team, which identifies community members who may be in need of resources and intervention.

UIPD Lt. Joe McCollough said about one-third of tips coming to these teams are from the police force, while others are from areas like McKinley and students or faculty.

Representatives from areas such as McKinley Health Center, the Dean of Students and human resources sit as members of these teams and provide their viewpoints, occasionally volunteering to take preventative measures.

Rather, he said members from the Dean of Students, faculty and staff are able to meet with the individual to discuss any possible issue and provide resources available to them at the University.

Nikki Burdyn, senior in LAS, said there are instances where she questions her safety on campus, especially in light of recent public mass shootings.

“I’ll be sitting in my lecture sometimes and think, ‘Oh, does this lecture have two exits?’ Or like when I’m sitting at the UGL, I think, ‘Oh, this would be a perfect location for something horrible to happen,’” Burdyn said.

Since Burdyn’s freshman year, she said she noticed more of her professors remind students of the “Run, Fight, Hide” plan, should a gunman open fire. But Burdyn said she thinks this isn’t productive enough for students.

“They should be taking more time to teach us about warning signs about different behaviors people might exhibit if (dangerous) thoughts were running through their heads,” Burdyn said.

Faculty members at the University are not required to warn or inform students on gun safety and prevention. It can only be encouraged by the police force, said Patrick Wade, communications director for the University’s Division of Public Safety.

Burdyn said one of her teachers informed students that the classroom was recently remodeled, now having the ability to lock from the inside, something she thinks should be a standard to each classroom.

As a community, Parsons said everyone needs to recognize the importance of communication and sharing information.

“There’s some significant education needed on how to make an assessment that’s not based on stereotypes or hate or misconception,” Parsons said.

“I’m confident that we have the training, equipment, skills and personnel to respond and immediately stop a threat,” Stone said.

Sponsored by a federal grant from Texas A&M University and the FBI, Stone said officers spent two days responding to emergency scenarios both independently and in teams, including in the classroom.

“We hear shots, we’re going in” Stone said. “We’re going to find and stop the threat. That’s what we’re supposed to do. We’re not going to wait.”

Stone explained training was based upon research that looked at previous mass shootings in the U.S., giving officers similar scenarios and providing instruction as to the best way to respond.

University police officers are instructed to be on the scene within three minutes.

In Dayton, Ohio, the shooter shot 26 people in just 30 seconds, despite rapid response from the police.

Wade said nothing has changed in the forces active shooter response plan following recent mass shootings because they have recognized this reality since the Columbine school shooting in 1999. However, he said the recent shootings remind the officers of the importance of their procedures.

“Our University, as a whole, has been preparing for many, many years,” Wade said. “All these (procedures) are in place because of the history.”

Should there be an active shooter in the area, campus police use Illini Alert to send updates and instructions to students in emergency situations.

“We cover this front to back,” McCollough said. “We prepare every day and train every day for the worst, hope that does not happen and do everything in the meantime to put preventative processes out there.”