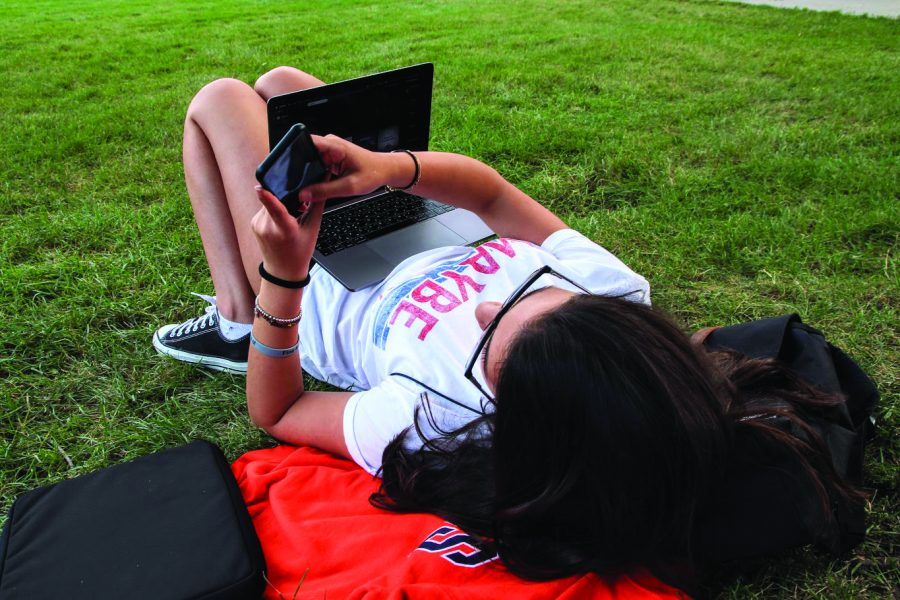 Sadeen AlHalabi, freshman in FAA, uses her phone on the Main Quad. Derek Hoiem, associate professor in Engineering, urges students to be wary about consenting to facial recognition technology in various apps because it can be used to track individuals.

The recent surge in facial recognition algorithms, especially in social media and phone applications, has raised concerns regarding threats to privacy.

Derek Hoiem, associate professor in Engineering, said this type of technology could be used to both reduce or enhance privacy.

Hoiem said, for example, a social media company can identify a person in multiple images and design a profile that can be used to improve market products to them.

“However, the company could also use recognition to notify and seek permission for someone else to post a photo of the user,” he said in an email.

In addition, government agencies can possibly utilize facial recognition, internet images and surveillance data to track someone’s locations and activities. They can also use these to identify participants at a rally or protest.

“A company that mines images from the internet and social media feeds could potentially offer the ability for their users to track the locations and activities of an acquaintance,” Hoiem said.

Adam Bates, assistant professor in Engineering, mainly works with computer security. Some of his recent research investigated security risks of machine-learning bias in smart speakers and other speech recognition services, which are similar to the issues with facial recognition techniques.

Bates said his concern with this technology is it is far from perfect.

“Facial recognition is error prone and especially disadvantageous to African American (people) and other minorities, women and even young people,” Bates said. “The consequences of misidentification could range from temporarily being locked out of your phone to being falsely matched to a mugshot in a database.”

Knowing the different types of facial recognition services is important; for example, a company such as Apple has a good record of protecting user data. In contrast, some companies may use people’s social media posts without consent to add to their own databases.

“A company called Geofeedia did this in 2015 to assist law enforcement in tracking and arresting political protestors,” Bates said.

Although individuals typically cannot access data required to use face recognition algorithms, Hoiem emphasized the importance of being aware that corporations and government institutions can utilize the data they have to identify people in any internet image or public space.

“Currently, people are often their own worst enemies in this regard by freely posting photos and providing access to private information about themselves online,” Hoiem said. “However, face recognition and artificial intelligence software has the potential to either further erode or enhance privacy, and regulation is needed to limit the ways that the technology can be used.”

Bates said students should take precautions when using these technologies.

“I would urge students to avoid consenting to facial recognition technologies in random mobile apps they download,” Bates said. “However, there’s also a good chance that most students are already present in dozens of private and publicly owned facial recognition databases.”