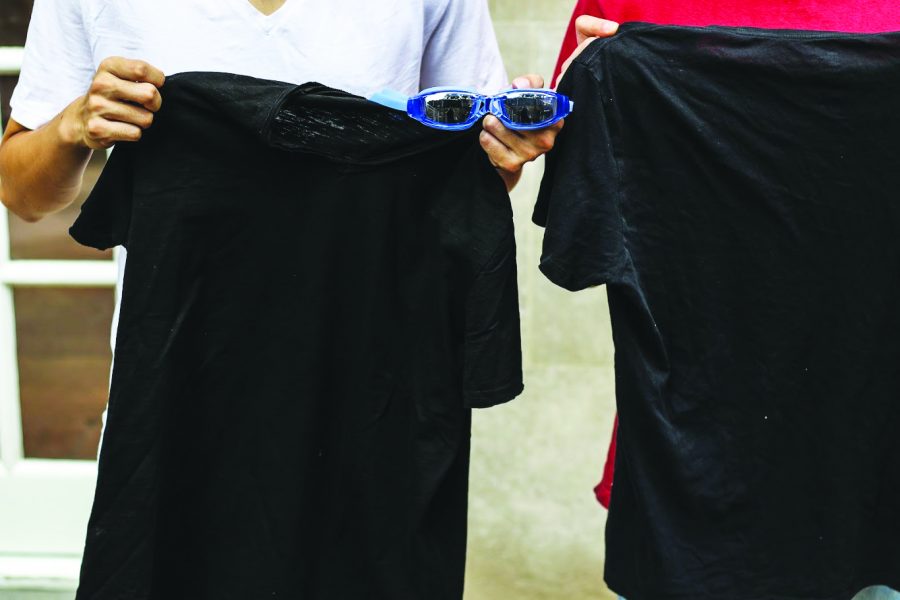 Saturday marked the thirteenth week of anti-extradition or bill protests in Hong Kong. Two students from the University were on the front lines.

Both students, who will remain anonymous and will go under pseudonyms Alex and Riley, have spent most of their lives in Hong Kong. This summer, they donned gas masks, helmets and goggles to protect themselves from upped surveillance and an aggressive police force.

The students struck on June 17 alongside 1.7 million other protestors. Two other incidents are burned in their memory.

“That’s when people got really angry at the police and government at the ways of handling the protests. They could’ve done it in a more peaceful and easy way, instead of just using violence and force,” Alex said.

Riley remembers July 21. After largely peaceful anti-government demonstrations around the Yuen Long train station, dozens of white-shirted men beat protestors with batons. The attackers are suspected to be part of the triads, a Chinese crime syndicate. After a slow police response, only two of the men were charged with any crime.

The protests have followed a dizzying escalation since the summer. What started as opposition to an extradition bill has evolved into a youth movement in the millions, faced with instances of police brutality, government surveillance and widespread misinformation. Here’s how they got here.

Hong Kong as a territory belongs to China. Under Hong Kong’s constitution — the Basic Law, enacted in 1997 after 156 years as a British colony — Hong Kong’s legal system is distinct from China’s.

For over two decades, Hong Kong has operated under the slogan “One Country, Two Systems,” developing a separate political, cultural and financial identity from China.

The extradition bill, brought forth by the Hong Kong government in late March, would allow the Chinese government to extract accused criminals in Hong Kong for trial in China.

The bill seemed to be an attempt to “start the process of harmonizing or reconciling the criminal justice process in Hong Kong with that of China,” said Jeffrey Martin, associate professor in LAS.

Martin taught sociology and researched policing at Hong Kong University from 2009 to 2014.

“There is no extradition agreement between Hong Kong and China, if you can believe it, that’s remarkable,” he added.

Hong Kong citizens feared the extradition bill would encroach on their autonomy, transforming their independent legal system into “a backdoor through which political dissidents are just vacuumed up into Chinese forms of detention,” Martin said.

Since then, dozens of oppositional rallies have energized the Hong Kong public, bringing five key demands to the forefront of the leaderless movement. Along with the resignation of Hong Kong Chief Executive Carrie Lam, Hong Kong protesters demand the following:

Alex and Riley mostly agree on the demands listed, though Riley expanded on criminal charges given to protestors.

“I feel like if (protestors) do commit crimes, they should go to jail, just like the police. It’s why we want an independent investigation. But right now the police are saying they don’t want to,” Riley said.

Lam suspended the bill in mid-June and gave an official apology, but the bill has not been fully withdrawn. Violent encounters between protestors and police have continued while protests expanded, blocking airports, roadways and legislative buildings, with marches of nearly 2 million people.

“It’s never-ending, and that’s because the government is not willing to admit their fault and not willing to look at the problem and solve it, instead of blaming those pointing out the problem,” Alex said. “That’s really the whole problem of this whole thing.”

For Alex and Riley, the visceral conflicts between police and protestors worry them. During protests, Alex rarely hit the front lines, in fear of being arrested for carrying protest gear.

“(The police) are supposed to help the people, they’re supposed to serve the people. What they’re doing right now is they’re being used as a political tool to shut those anti-government voices out,” Alex said.

However, what can affect them here — widespread surveillance and Chinese Communist Party-driven disinformation — they feel is just as sinister.

“Anyone who talks about this whether they’re in mainland China, Hong Kong, or even here in the U.S., they do have an eye on us, believe it or not,” Alex said. “The surveillance, it’s crazy.”

Riley cites incidents in Australia and Boston, where Hong Kong students expressed their identity and opinions of the conflict, only to face mobs of in-person harassment from Chinese students.

Another tool to chill political conversations is the Wu Mao, or “50 Cent Army,” an online phenomenon where social media users are paid to post items that promote the CCP or target dissidents, Martin said.

“The kind of behavior (the 50 Cent Army) drives is this mass mob behavior of doxxing people and making their life miserable by piling on and demonstrating righteous, politically correct harassment of the enemy,” Martin said. “Even if you’re just a regular, undergraduate, overseas student who says something in a school newspaper that is against the party line, you are absolutely without question exposed to forms of harassment that can escalate to incredible levels.”

The Hong Kong protests echo 2014’s Umbrella Movement in their size, youth and message. The current demand for direct elections to select the Chief Executive and LegCo comes straight from 2014, when the Chinese government required pre-screenings for Hong Kong Executive candidates, sparking the protests.

It all comes down to the property market. Nearly half of the housing in Hong Kong is leased out by the government.

“There’s this artificial pressure to keep property values high, which in practice means don’t build more housing, so the half of the population that is very poor lives in this public housing where it takes them three hours to get to work on the bus and they’re not building anymore,” Martin said.

As a result, Hong Kong has one of the highest wealth gaps in the world. Its Gini coefficient — an index used to measure the distribution of wealth in a society — sat at 53.9% in 2017, ninth highest in the world. Zero represents total equality.

“These kids, living in a 700 square-foot, two-bedroom apartment with their family, they’ll never be able to move out. They can’t get married, they can’t start a family because it’s impossible to jump from the poor people living in subsidized housing to the rich people who are speculating in this real estate market,” Martin said. “To my mind that’s the fire that’s got these kids out into the streets.”

The conflict has reached a tipping point, and neither the government nor the protestors are willing to make concessions.

“If (the government) is going to come out and say something, or if there’s a conversation between both sides, that’s actually the quickest way to solve this. Because we’re not asking for a lot, we’re asking for a little bit,” Riley said. “But what I think long term is going to happen is they’ll arrest most protesters and make us afraid to come out.”

Many of the active protestors are Hong Kong’s youth, hailing from colleges and secondary schools.

“They’re the future of Hong Kong, you can’t fight against the future,” Alex said. “In the end it will just fall back on you.”

With online broadcasting capabilities, Martin doubts a violent end to the protests on the level of Tiananmen Square. An expansion of the surveillance system used in China is far more plausible, Martin said.

“To the degree that Hong Kong is an opportunity to present what a totalitarian city state looks like, that would be a commercial product with tremendous value to certain parts of the world,” Martin said. “I don’t think the trajectory is going to be a freer Hong Kong, I think there’s going to be a new security system installed, how quickly it gets installed is the question.”

Given the facts, it may be easy to villainize China in this situation. Through a colonial lens, assigning a good and bad side becomes more complicated.

“China has a legitimate gripe, that the British stole their land and forced them to buy opium,” Martin said of Hong Kong’s origins. “If you’re thinking about where the enlightened sympathies lie in this story, it’s not just ‘China’s a totalitarian state that’s trying to oppress the Hong Kong people,’ there’s a reason why they’re really committed to recovering all the possessions that were extracted by colonial power.”

The same goes for Chinese students. Despite examples in Australia and Boston, the idea that every Chinese student is a potential mobster is ridiculous, Martin said.

Alex and Riley both speak to the plight of students from China, faced with government propaganda and disincentives to speak against the party line.

“I feel like it’s my responsibility to give (Chinese students) fair information, information that’s correct, so that’ll lead them to the right judgement, because there’s a complete lack of information in China due to the firewall,” Riley said. “It’s fine if they have different political standing, but I want them to know we’re not for Hong Kong independence, and we’re not for violence.”

Runze Sha, president of the Chinese Student Scholars Association, provided a response to the protests on behalf of the organization.

“CSSA is a registered student organization, we completely focus on providing a better living and studying environment for students, especially Chinese students, on campus. CSSA has no relationship with politics,” Sha said in an email. “On a Chinese citizen’s perspective, we only support the One China Principle, that Hong Kong is and will always be a part of China.”

Amid the chaos, 2047 looms. It marks the 50th year and expiration of the Basic Law, and the fate of Hong Kong will be decided by the Chinese government.

“That day will come, right now we just want the rights we were promised to have,” Alex said.

Alex and Riley said many Hong Kong families may just move overseas if Hong Kong is reunified into China’s jurisdiction.

“Deng Xiaoping, he said if One Country, Two Systems work, there’s no need of changing it. If we prove that it works perfectly and no need for change we won’t do anything about that. I hope everything goes well,” Alex said.

For the 3.3 million Hong Kongers in public housing, a move overseas might not be so simple.

“If you’re one of the half of the population living in public housing, what are you going to do to avoid getting kicked out into the street,” Martin said.