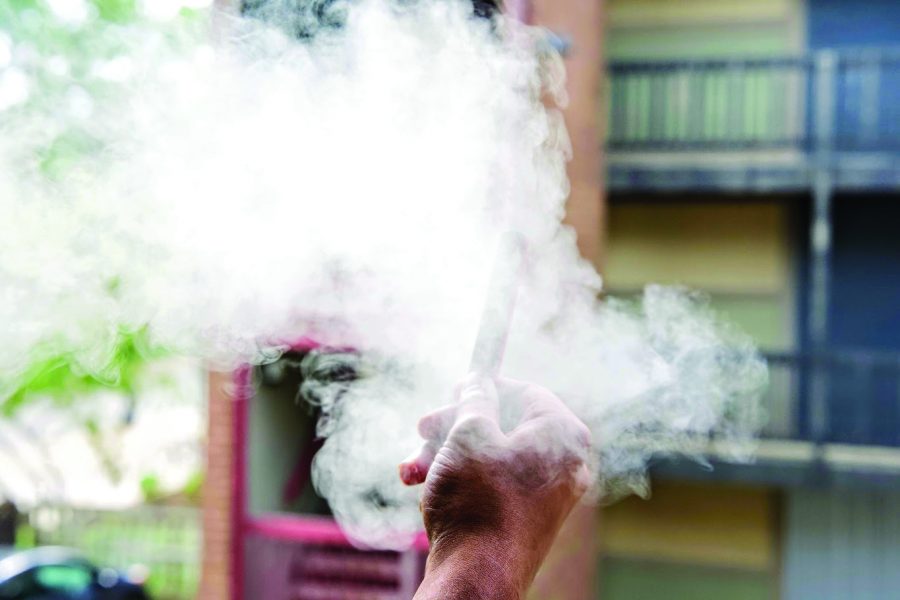 A student vapes in an apartment complex near the North Quad on Saturday. As of Aug. 26, the University is a smoke-free and tobacco-free campus.

The first death related to severe respiratory disease caused by vaping was reported in Illinois this past month, according to an article by NBC News.

In a statement updated on Aug. 23, the Center for Disease Control said 193 potential cases of severe lung illness associated with e-cigarette product usage had been reported by 22 states, as of 5 p.m., Aug. 22. These were all reported between June 28 and Aug. 20.

In another statement released on Aug. 23, the director of the Center for Disease Control stated, “We are working with state and local health departments and FDA to learn the cause or causes of this ongoing outbreak.”

As of Aug. 26, the University is a 100% smoke and tobacco-free campus, which builds on the smoke-free policy that was implemented in 2014. The policy refers to all forms of tobacco, including Juuls and e-cigarettes.

“The University of Illinois student body is very intelligent and should take note of the recent news event,” said Robert Woodward, medical director of McKinley Health Center, in an email.

He said unknown and known consequences on the human body can result from inhaling or ingesting any foreign chemicals.

“Only time will be able to tell all of the negative impacts that vaping has on students,” he said.

Michele Guerra, director of Campus Wellbeing Services, said not knowing the long-term effects of vaping is part of the issue.

“When (the University) banned them in 2014, they’d really only been around for a few years,” she said. “Now they’ve been around maybe 10 years.”

However, the effects of some components of e-cigarettes, such as nicotine, are more known.

“Nicotine can cause inflammation in the lungs and provide a barrier that would hurt the lungs protective mechanisms to prevent infections,” Woodward said in an email. “Long-term use will increase hypertension and cardiovascular problems also,.”

Guerra said the recent death is not an outlier, and health entities in the nation are starting to note what is happening.

“We’re also taking the opportunity of the fact that information and communication is being refreshed about the policy to educate the campus about vaping because it’s not nothing,” Guerra said. “It’s a powerful nicotine delivery system, and it does have its own health risks as is evidenced by this death that just occurred and the fact that the CDC is launching a full investigation on the health detriments of vaping,”

Haily Stillabower, graduate student in AHS and tobacco and smoke-free campus program assistant, said many students have misconceptions regarding vaping.

“(Students) are not really sure what’s inside it, and the FDA doesn’t regulate what’s inside it as well, so really there is no knowing what is inside the vapor or the liquid for any vape device. It’s just that misconception and now we’re seeing the repercussions,” Stillabower said.

Guerra said she thinks many students are unaware of the health risks because product manufacturers are not going to publicize this information. In addition, most of the information users receive about e-cigarettes are from advertisements, which sometimes minimize the risks to make them sound safer than they truly are.

“It’s hard to know exactly how to fight it because we don’t have the data,” Guerra said.

Guerra said the manufacturers are taking advantage of the lack of research and information.

Another study that came out the same week as the news of the death by vaping in Illinois stated e-cigarettes change the constitution of blood vessels, Guerra said.

“I’m not going to be at all surprised if we start seeing instances of increased heart attack, stroke and high blood pressure,” Guerra said.

Stillabower said the unknown ingredients of e-cigarettes may cause other health issues to arise.

“I was thinking the one thing that’s missing the most is our research to back us up to say this is not good for you,” Stillabower said. “And sadly it will be later down the road that people start developing these illnesses and diseases.”

Without proper regulation of e-cigarettes and vaping products, it isn’t possible to know how much nicotine you’re getting every time it’s bought, she said.

Even though there are many unknowns, e-cigarettes are still popular amongst students.

Stillabower said students are mostly worried about the carcinogens in smoking and tobacco products and getting cancer as opposed to being addicted to nicotine.

Although quitting smoking, vaping or using any kind of addictive drug is difficult, the University has resources, such as Freedom From Smoking and other programs, that help students who use tobacco and vaping products.