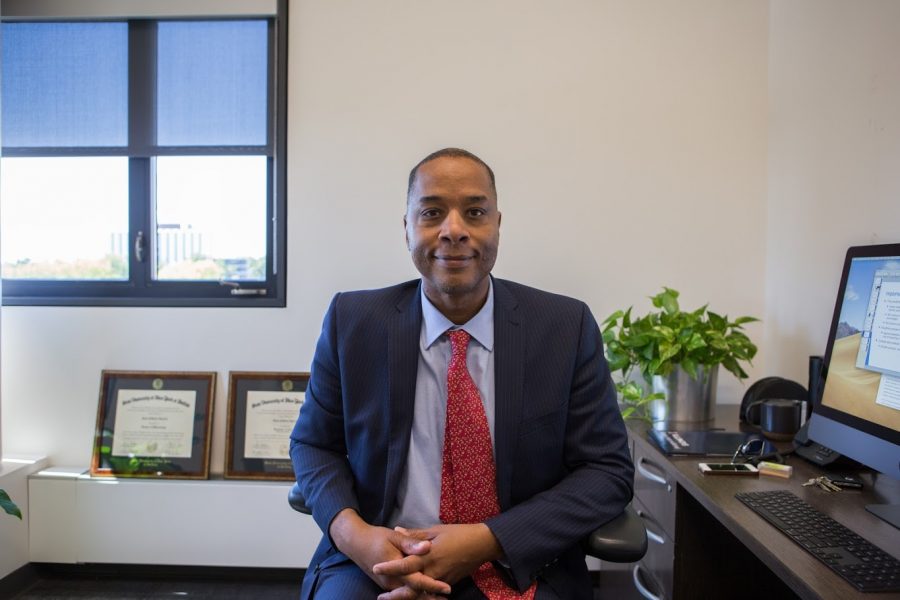 The University’s first Vice Chancellor for Diversity, Equity and Inclusion Sean Garrick sits in his office. On Sept. 1, a noose was found in an elevator at Allen Residence Hall, and Garrick said he aims to prevent incidents like this from occurring.

The University’s first Vice Chancellor for Diversity, Equity & Inclusion Sean Garrick is still adjusting to life in the state of Illinois. Garrick said his days consist mostly of meetings, where he learns about the challenges and issues the University faces.

“It’s a lot of listening, which is good because I don’t know the institution of the campus intimately, so I need to rely on those who have been here for a long time to give me a sense of their perspective and what they see the needs to be,” Garrick said.

Garrick’s role as vice chancellor and chief diversity officer is to pursue opportunities for educational and cultural transformation relating to bias and discrimination against any group of people, according to the University’s job description.

On Sept. 1, a noose was found in an elevator at Allen Residence Hall. A student was later arrested and charged with committing a hate crime, according to the University Police Department.

“On campus, off-campus, these things have been going on for decades,” Garrick said. “It’s part of the history of our country. It’s a national trend, unfortunately. It is our goal to try to address it and remove instances like that from our campus and our community. As a University, we have to embrace that trust that students place in us and then deliver.”

From New York to the Midwest

During his drive to the University campus, Garrick said he often reflects on how he spent 21 years of his life at the University of Minnesota, initially thinking he would only be working there for no more than two years.

“In a way, I’d like to be able to not erase my previous experience, but put on complete blinders to it and just take in UIUC for what it is,” Garrick said.

Garrick’s experience leading diversity efforts at the University of Minnesota has also taught him many lessons he said he will keep in mind as chief diversity officer.

“The biggest thing I learned there was, in a way, not believe that you have the answer,” he said. “And instead, invite people into the conversation and put their answers forward. For anything to be effective or to really take root, it has to be at the grassroots level.”

Garrick met Jones at the University of Minnesota, where Jones worked as a professor and administrator for nearly 30 years. Garrick said because they worked in different colleges, he would only cross paths with Jones during large cross-campus events.

Garrick grew up in New York, where he studied engineering and received his bachelor’s degree, master’s degree and doctorate at the State University of New York at Buffalo. He said his upbringing in New York helped broaden his definition of what diversity means.

“People think of diversity in terms of race, ethnicity, gender, religion — which I think is all of those things — but one thing that’s really changed in terms of my thinking, is socioeconomic background,” he said. “We all believe and know college education is a fantastic thing, but what happens if you can’t afford it? That’s a huge divider.”

His experience of being an underrepresented minority in STEM also influenced his decision to take on leadership roles that promote more diversity and inclusion.

“It’s definitely affected not just my outlook on this job but really my motivation to do this job,” Garrick said. “I love science. I love engineering. I love programming, but at the end of the day, I’d like more people to love those things, too. It shouldn’t just be folks who grew up in and around engineering, going into engineering.”

The Office of the Vice Chancellor for Diversity, Equity & Inclusion

The OVCDEI was established last summer in response to an external review, initiated by Jones in the spring of 2017, of diversity programs at the University.

It was previously known as the Office for Access and Equity, and before that, it was called the Office of Diversity, Equity and Access.

The external review team, composed of leaders from other universities, examined diversity projects and initiatives throughout campus. It recommended the appointment of a cabinet-level vice chancellor for diversity, equity & inclusion to enhance coordination and accountability after it noted the decentralized nature of diversity efforts at the University.

“This lack of central structure, organization and clarity are the greatest impediments to efforts to build a more diverse university,” the 2017 report said.

The search for a vice chancellor started last fall and was extended into the spring, during which more candidates were brought to campus, including Garrick.

Garrick started his appointment as vice chancellor on Aug. 1. He said he is excited to get to know the University better, such as by establishing a more authentic view of what the student experience is like.

“I wish I could have a crash course on UIUC, particularly from the student perspective,” Garrick said. “That would really help inform when we prioritize things that we need to do, how we communicate to folks that we’re actually doing these things, (and) that we take their experiences, their opinions and their values very seriously, and we’re actually making progress (toward) it.”