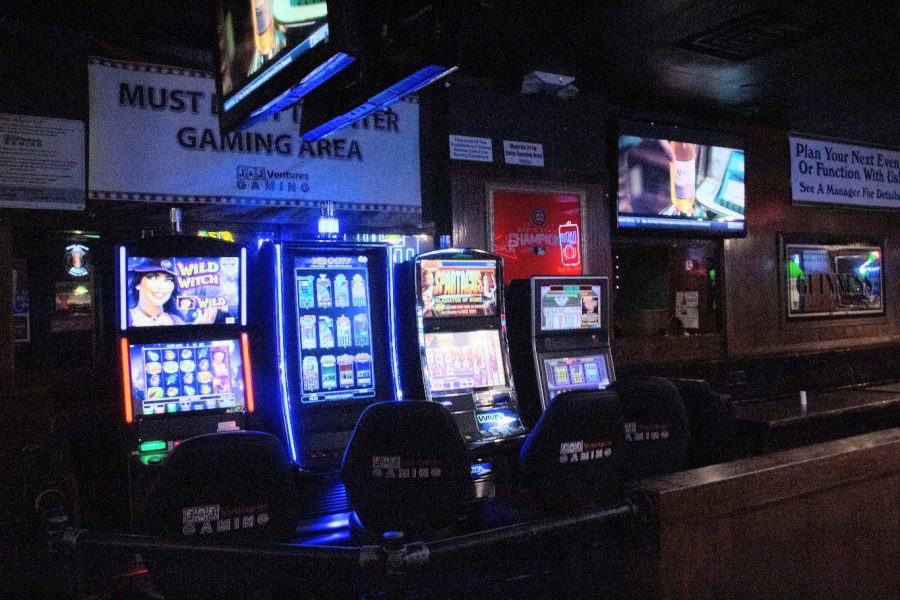 Murphy’s Pub’s gaming area is located toward the back of the bar. Gambling has been greatly expanded in Illinois following a bill signed by Gov. J.B. Pritzker earlier this year.

A few months ago, Gov. J.B. Pritzker signed a bill that will greatly expand legalized gambling in the state of Illinois.

Sports gambling will be legal as well as slot machines in airports, horse racing tracks and a variety of other venues. Several casinos, including a megacasino in Chicago, would also be added around the state. Some locations on campus, including Murphy’s Pub, already have slot machine gambling games installed.

Some of the dangers and risks that stem from legalized gambling were discussed in a University resolution regarding sports gambling, which went before the faculty senate in February and failed.

“My support for the resolution was based on the fact that there is some, but not much, research available on the economic effects of legalized gambling,” said Bryan Buckley, teaching assistant professor in LAS, in an email. “I thought it might be a good opportunity for someone to do some research in that area. I figured the resolution might help spur things in that direction.”

The resolution especially expresses concern regarding the impact of legalized gambling on young people.

One part of the resolution reads, “psychological, sociological and psychiatric communities refer to online gambling particularly when associated with the lure of sports gambling as the ‘crack cocaine’ of creating new addicted gamblers, with high school students already showing double the addiction rates of the general public.”

An article by ProPublica Illinois said lawmakers are also going to increase the amount of money going toward fighting gambling addiction, which experts are calling a disease similar to drug and alcohol addiction.

Illinois does seem to be expanding the gambling status relatively quickly.

“Gambling was legalized to increase the state’s tax revenue in the immediate future,” said Amitai Aviram, professor in Law, in an email.

Legalized gambling will be taxed by the state, he said, so its direct effect should increase tax revenue. However, increased gambling can reduce the tax base in the long-term if it reduces the amount of money people can spend on other purchases since, on the whole, gamblers pay more than they win so the gambling industry makes a profit.

The effects of gambling, such as increased taxation on the industry, will take place in the short term, Aviram said. The negative effects, on the other hand, may gradually accumulate over the long term.