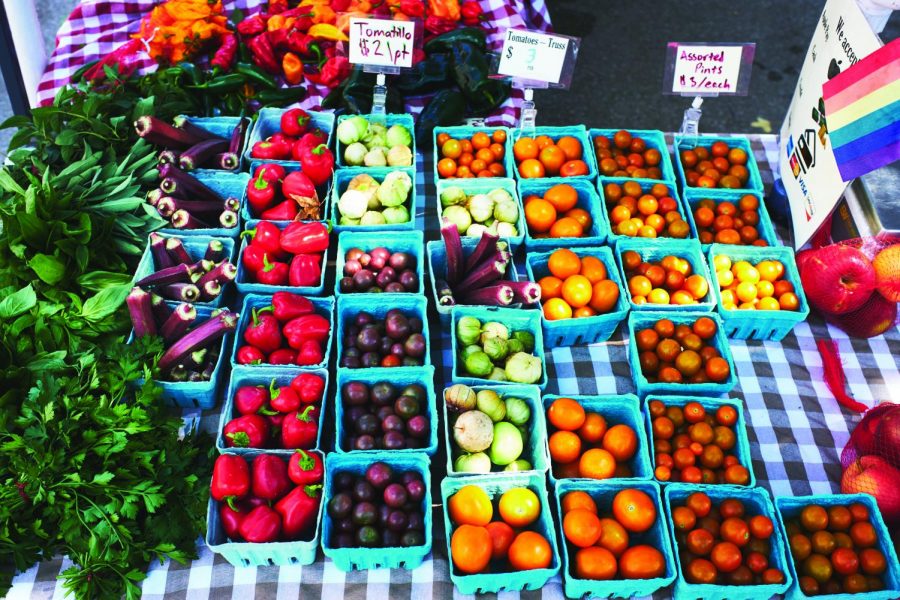 An array of fruits and vegetables is displayed on a table on the Main Quad hosted by the Sustainable Student Farm on Thursday. The farm is interested in creating a local food system tied into the campus community.

This past season has been one of the hardest in decades for the farmers of the Midwest. However, the Sustainable Student Farm at the University has not been influenced due to alternative farming techniques.

“Most farmers had a very bad year this year, and that’s really rough, and our heart goes out to them,” said Ben Joselyn, assistant farm manager at SSF.

SSF strives to show there are other options and measures that can be taken to protect the farm’s profits and efforts.

“Our farm is doing better this year than it did last year, and that’s because we’re growing a diversity of crops,” Joselyn said.

Matt Turino, SSF farm manager, said the farm grows 35-40 different crops in a given year on its 6.5 acres of land.

“Our biggest crops by far are tomatoes, peppers, carrots and beets. By weight they’re the largest things that we grow,” Turino said.

Due to the farm’s broad diversity, SSF was able to have record sales, Joselyn said. The farm is currently about $10,000 ahead, a little more than 10% of where it was last year.

“We’re doing pretty good in a year that a lot of people struggled, and so not only are we trying to show that it’s healthier for people and healthier for the planet, but it’s financially viable,” Joselyn said.

Though being a diversified farm adds a lot to the complexity of the work, it also adds a little bit of a buffer from year to year like what has happened this year, Turino said.

SSF works to use low-input systems as much as possible, Turino said.

“We don’t use any synthetic fertilizers,” he said. “We typically use other sources of nutrition for our soil that we can grow on the farm.”

Turino added that the farm tries to use as few possibly harmful chemicals as possible.

“We use no fungicides or herbicides,” he said. “We do use some organic pesticides for insect pressure, but we try to minimize that as much as possible by doing crop rotations and trying to do things that really increase the health of our plants.”

Turino said the farm tries to be mostly self-sufficient to pay for most of the farm’s needs and inputs.

“Eighty-five percent of what we grow goes to the dining services here on campus,” Turino said. “We’ve had a major relationship with them since the beginning, and we’re part of the crop science department and the College of ACES.”

The other 15% is sold on the Main Quad every Thursday from 11 a.m.-4 p.m. until October at the SSF farm stand.

The farm is also interested in creating a local food system tied into the campus community.

SSF has collaborated with groups to do different kinds of projects. People have been coming up with research projects or other ways to contribute to the infrastructure of the farm, Turino said.

“These projects are interesting to us,” Turino said. “If a student is interested in doing a project that might plug into the farm, we’d be interested in talking to them.”

Kimberly Ward, senior in ACES and former SSF intern, works the farm stand on the Main Quad every week.

“The farm stand has been really taking off, and it’s by us being here,” Ward said. “We have regulars, we’re setting things aside for people. ‘Oh it’s too heavy, let me bring it to your office,’ like going that extra mile and being very personable and having those direct partnerships. I feel like it’s worth a lot more. That’s what’s missing in the American farm system.”

Turino said experience out on the farm gives people a sense of what farm work is like and hopefully a greater value of how food is grown.

Although farming does require a lot of hard work and care, Ward said weekly dinners with the SSF team make the farm a place of self-care.

“Especially for me coming from a very urban background, I think that it’s just nice to experience a farm and just take it in. There are definitely people I’ve met who describe their farm as not just a place for growing food but a place of personal growth, quiet time, healing and things like that,” Ward said. “I really do feel like you can find that on a farm.”