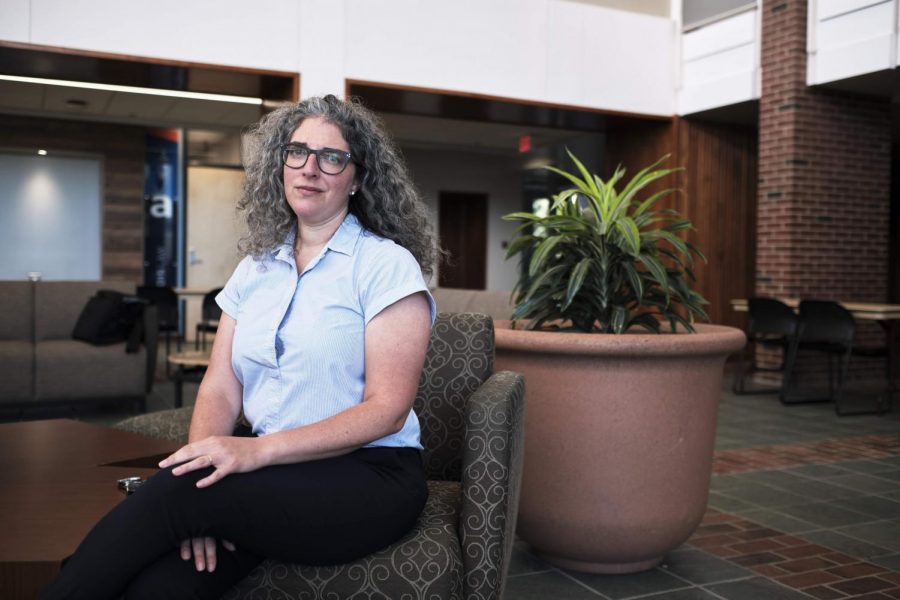 Professor Lauren Aronson sits in the main lobby of the Law Building on Sept. 12. Law Professors Aronson and Michael LeRoy believe Trump’s recent citizenship policy is the first step in ending birthright citizenship for children of unauthorized immigrants, a longtime goal of the Trump campaign.

A recent policy by the Trump administration will make it more difficult for naturalized United States citizens serving abroad in the U.S. military to obtain automatic citizenship for their children.

Some experts believe the policy may be the first step in ending birthright citizenship for children of unauthorized immigrants.

The policy, released Aug. 28 by U.S. Citizenship and Immigration Services, draws distinctions between physical presence of a country and residency, where a citizen has established a “primary dwelling place” in the U.S. It also explains that U.S. government and military members working abroad are no longer considered to be “residing in the United States” to obtain citizenship for their children under Immigration and Naturalization Act 320.

The rule would affect around 100 children annually, born to U.S. military members that have not resided in the U.S. for the required amount of time. The updated policy takes effect Oct. 29.

“I think it’s a solution in search of a problem,” said Michael LeRoy, professor in Law. “There has been no controversy on the citizenship status of the children of military officers. The President is, in effect, attacking the most important people for defending the freedoms and rights of Americans.”

Though it is another hoop to jump through for certain members of the U.S. armed forces, when it comes to actually applying for their children’s citizenship, it will not be that difficult.

“For most of them, practically speaking, the effect is minimal to none. Children born abroad to those particular people in general have other means of acquiring citizenship. It may be adding one level of red-tape, though I’d say again it’s pretty minimal,” said Lauren Aronson, director of the University Immigration Law Clinic.

With the policy’s language fixture on “residency,” these professors believe it’s the first step in ending birthright citizenship, a longtime goal of the Trump campaign.

“If you look at the rhetoric surrounding immigration and Trump, ever since he was running, (ending birthright citizenship) is what he said he wanted to do. This is another way of getting at it,” Aronson said. “By redefining residency, it’s going to affect children who are born here to unauthorized immigrants who are present in the United States.”

Trump has publicly considered ending birthright citizenship as recently as Aug. 22. His biggest obstacle is the U.S. Constitution, LeRoy said.

LeRoy said this avenue could be a legal “test case” that would set a “limited, narrow precedent” to eventually challenge birthright citizenship.

“Where I thought he would go would be an executive order that limits birth tourism. There are people who specifically come to the United States to give birth to the child so the child can have birthright citizenship,” he said.

If the definition of residency is changed further, it could also prevent unauthorized immigrant children from getting access to education, Aronson said. That right is currently protected by the Supreme Court case Plyler v. Doe.

Regardless of the policy’s potential implications, there is a population of the U.S. military whose families will soon be affected by residency redefinition.

“With this policy change, folks who are naturalized U.S. citizens who are serving their country could end up having barriers to securing citizenship for their children born abroad,” said Julie Dowling, associate professor in LAS, in an email. “This would adversely affect Latinx and other immigrant members of our military.”