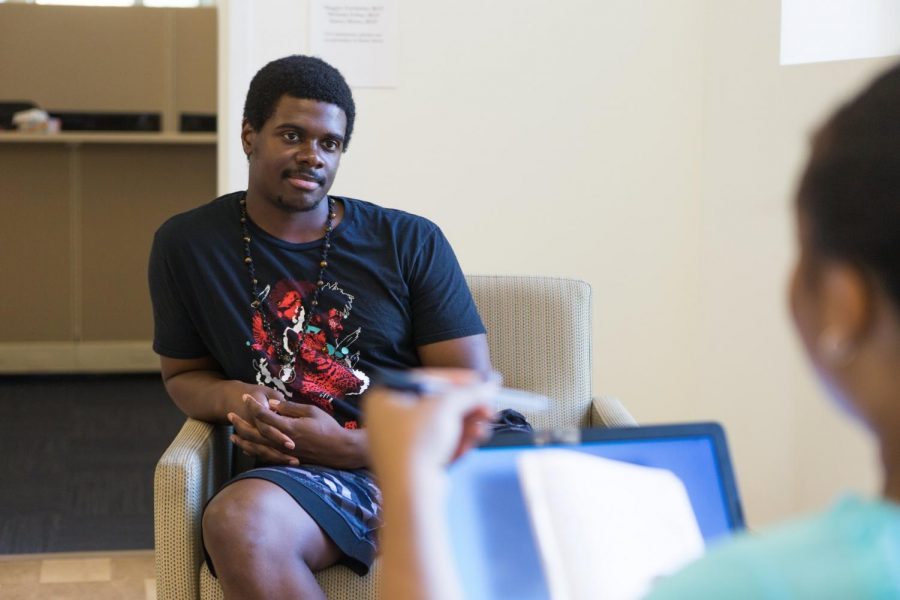 Keenan Dailey, sophomore in FAA, talks about his experience as an actor for a virtual reality film, “The Drive”. The film demonstrates the controversial relationship between the police and people of color.

YouMatter Studios, a student-based media company, produced a virtual reality film that depicts the relationship between law enforcement and people of color.

“The Drive” is a virtual reality film that features different perspectives of interactions with police that will provide users with an authentic experience. The launch date for this film has not been released yet.

“The goal of it is essentially to replicate a first-person perspective or more intimate or immersive perspective from the viewer or audience member to the actual characters that are being portrayed in the film,” said Keenan Dailey, sophomore in FAA.

In the film, Dailey plays the roll of Dayveon, a college sophomore, who is driving to a party with a friend when he gets pulled over by the police. Dailey said his experience with acting in “The Drive” was different than a traditional narrative, given its multiple perspectives.

“Playing it, I find it to be just a really interesting flip on perspective that you don’t really get a lot of the time,” Dailey said.

Adam Berg, University alumnus and an actor in “The Drive,” portrays the life of Officer Jackson Will. In order to tell an accurate story, the team worked hard to gather precise information through interviews with University and Urbana police about the officers’ on-duty routines. Members of the Police Training Institute in Champaign contributed to the research, as well.

“In the news, you see cops that don’t follow protocol, and then you see what happens when that occurs, so you see both perspectives,” Berg said.

Jake Piasarki, communications director at YouMatter Studios and University alumnus, said the team saw the need for understanding and for a conversation.

“Virtual reality itself is an incredible tool that we as a whole society in the artistic community haven’t really fully figured out how to use yet,” Piasarki said. “But we know that it’s really good for empathy and for creating empathy in people because you’re transported into the point of view of a character.”

Although this was the goal of all films, Piasarki said virtual reality does so in a “direct way.”

“The stories we’ve heard and the research we found made it very clear that this issue requires policy changes that will help communities heal and allow officers to serve (not “police”) their community with the resources they need,” Ivey said in an email.

During the research process, Ivey said she noticed repeated instances of trauma both members of law enforcement and citizens experience.

“The interactions between police and marginalized groups is often individualized to suggest that the violence our country is seeing and experiencing is because of ‘that one bad cop’ or that it’s a matter of civilians submitting more to officers,” Ivey said.

Ivey said the “racial targeting” that occurs in traffic stops is systemic. The main goal of “The Drive” is empathy, and she wants the film to make a significant impact on the community, she said.

“I hope that (users) be able to gather a greater sense of empathy for other perspectives,” Dailey said.

Editor’s note: A previous version of this article states that the team worked with Champaign Police. However, the team worked with University and Urbana Police Departments. The Police Training Institute contributed to the research as well. The Daily Illini regrets this error.