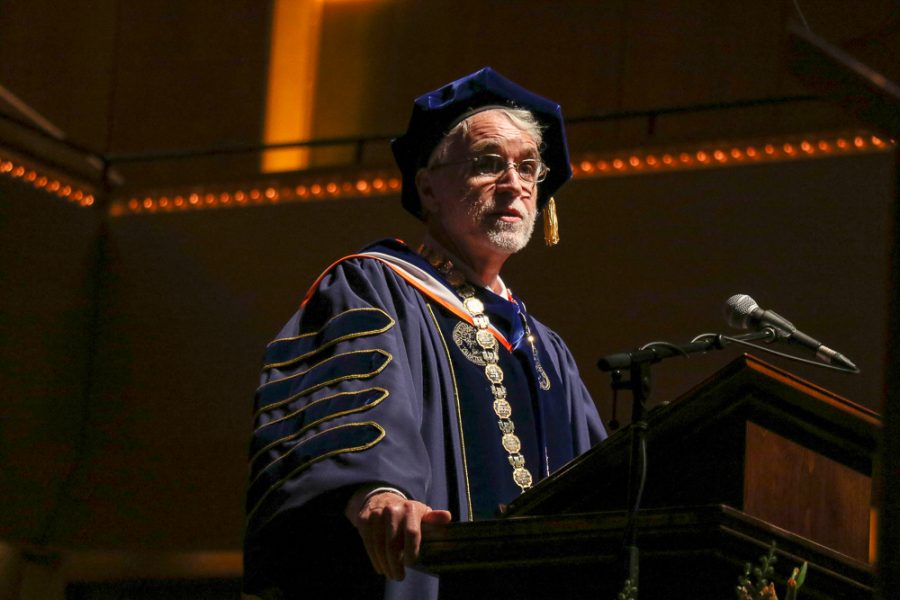 University of Illinois System President, Tim Killeen speaks at graduation. The UI System Board of Trustees recently approved the budget for fiscal year 2020, giving Kileen a $100,000 one-time reward for his work in fiscal year 2019. Kileen’s total salary, combined with the reward for 2019 was $700,000.

The University of Illinois System’s budget for the fiscal year through June 2020 is up 2.1% from last year’s $6.8 billion budget.

The budget mainly funds and focuses on operations and employee benefits in Springfield, Chicago and Champaign-Urbana.

The UI System saw a 5.2% increase in operating revenue from last year and intends to focus the extra revenue on student financial support, a stronger faculty and economic development.

President Timothy Killeen said in the release the budget revenue increases come from a combination of tuition, state appropriations and private donations.

A 4.7% increase in state appropriations, the largest increase since 2001, is in large part due to collaboration between Killeen and lawmakers to support funding for the UI System’s key priorities.

Even as tuition for in-state undergraduates was frozen for a fifth straight year this fall, the rapid enrollment increases in the UI System contributed to a 3.7% increase in tuition revenue.

Enrollment has increased by 9%, almost 7,400 students, since the fall of 2016, leading to a seventh-straight record-high enrollment of 88,861 students this fall and keeping the UI System on track to reach its five-year goal of topping 93,600 students by the fall of 2021.

The budget will also provide $334.3 million for scholarships and financial aid, which hopes to lead to greater accessibility and enrollment.

The one decrease represented in the release is a 3% lowering of estimated payments from the state for employee healthcare and pension benefits, with the budget now including $1.7 billion in payments.

Effective September, UIC Chancellor Michael Amiridis will be paid $600,000 a year, up from $484,500 per year as approved by trustees.

Board Chairman Don Edwards said the pay increase is reflective of the accomplishments of Amiridis, who has seen an 18% increase in enrollment at UIC since taking office in 2015.

Killeen will receive a one-time reward of $100,000 for his work last fiscal year, which the board granted after record UI System enrollment since he took office in 2015 and excellence in leadership as determined by the board’s review of progress according to the UI System’s Strategic Framework.

When combined with his salary, Killeen’s total fiscal year compensation for 2019 added up to $700,000.