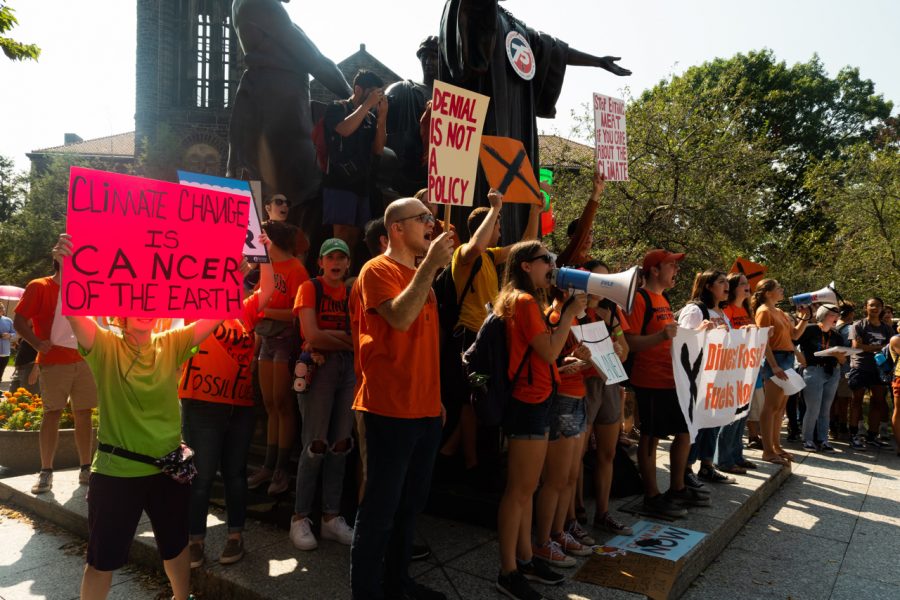 Protestors for the Climate March gather in front of Alma Mater on Friday.

Students and local residents from Champaign-Urbana protested on the North and Main Quad on Friday as part of the UIUC Climate March, organized by Students for Environmental Concerns.

Demonstrators circled around the Main Quad with chants such as “no more coal, no more oil, keep that carbon in the soil” and “climate change is not a lie, do not let our people die.”

After demonstrators looped around the Main Quad, they separated into groups and chanted outside of Foellinger Auditorium, Lincoln Hall, Henry Administration Building, Illini Union, Noyes Laboratory and Davenport Hall.

“We are the future of our country,” said Danielle Weimerskirch, freshman in LAS and member of Students for Environmental Concerns. “This is our planet, we are going to inherit this planet and it’s important that we show that we care for our future.”

President of Students for Environmental Concerns Abbi Pstrzroch, led the march on the Main Quad. She said the local demands of the march is to get Gov. J.B. Pritzker to act on two of his campaign promises: banning fracking in Illinois and signing the Clean Energy Jobs Act.

“It’s really amazing to see so many young people mobilize together and come together for a common cause,” Pstrzroch said.

Other organizers of the march include Fossil Free UIUC, whose core mission is to get the University to divest in fossil fuels, and the Sierra Club Prairie Group Illinois Chapter.

The march was part of a global climate strike that involved over four million demonstrators from 163 countries around the world calling for more action to address the climate crisis, according to environmental organization 350.org.

The march concluded with speeches in front of the Alma Mater.

Retired University faculty Sharon Monday and her husband Jack Paxton participated in the march. Paxton said they were inspired to march out of concern of not leaving a good world for younger generations, including for their grandchildren.

“I’m here for our generation and all the future generations to come,” Monday said.