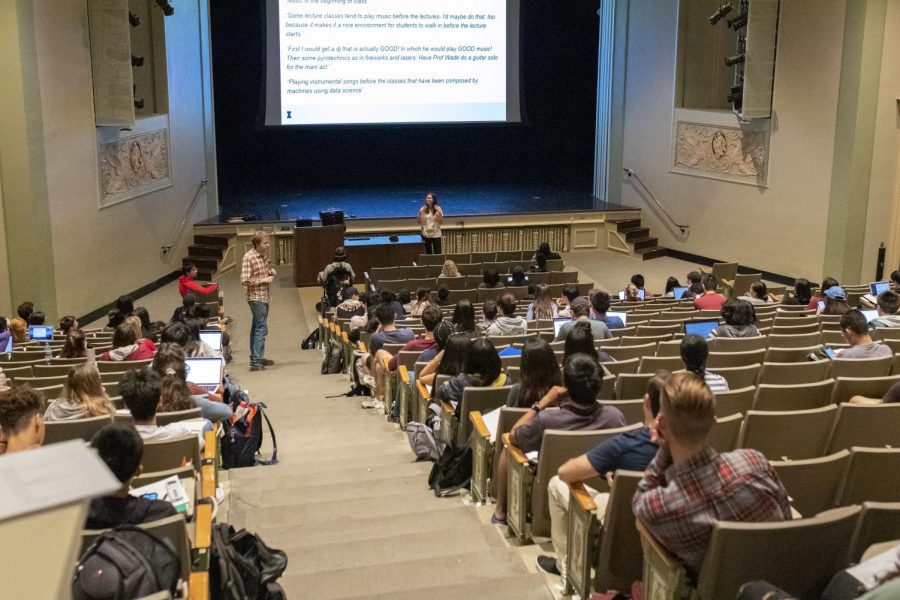 Students sit in the Lincoln Hall Theater during a STAT 107: Data Science Discovery lecture taught by Karle Flanagan and Wade Fagen-Ulmschneider. According to the Report on the Entering Class of 2019, the Class of 2023 is the “most diverse” class in history.

The University welcomed the “most diverse” class in history, according to the Report on the Entering Class of 2019.

The report included greater enrollment of African American and Latinx students, as well as women, transfer students and students from rural areas.

The Illinois Commitment program played a large role in the increase of enrollment diversity, according to Andy Borst, director of Undergraduate Admissions.

“Historically, when we look back even back to 1968, when we’ve initiated major need-based aid financial programs, we’ve seen a corresponding increase in overall diversity, but particularly in our African American diversity, and I think that is what we are seeing with the Illinois Commitment Program,” Borst said.

Gretchen Adams, assistant dean for Undergraduate Student Affairs in the College of AHS, said she also believes Illinois Commitment was one possible factor in the increase in diversity and enrollment. AHS recently posted on its Twitter that this year’s freshman class was one of the largest and most diverse groups of new students for the college.

For the entire campus,  23.2% of the freshman class is considered underrepresented.

“I do think Illinois Commitment made a difference,” Adams said. “The way that Illinois commitment was marketed and advertised to students … encouraged a lot of students — and a diverse population of students — to apply across the state.”

However, Adams said she will not be sure if Illinois Commitment was truly a factor until she gets the percentages of how many AHS students are part of the program from the Office of Admissions.

Borst also said the University has various programs in place, particularly for recruiting African American students, as well as a large staff in the Chicago suburbs recruiting potential students throughout Chicago and downstate Illinois.

“We’re looking for influx in diversity wherever we can find it, but we’re doing application workshops with students,” Borst said. “We’re visiting high schools. We’re doing college fairs to talk to students. We have a few mentoring programs. We’re doing bus trips to campus. I would say that we have a fairly robust recruitment commitment to improving campus diversity and particularly African American diversity.”

“First of all, I think it helped low and moderate-income students understand that there are considerable financial aid opportunities,” Pitts said. “Of course, when a student applies to college, they don’t know what the real cost is going to be. They know college is expensive. Hopefully Illinois Commitment helped them understand that there is considerable financial aid out there.”

He said the Illinois Commitment program allowed even more students to apply and the University, upon receiving their application, to at least have a “fighting chance” for applicants to attend the University.

“Our transfer numbers were up considerably this year,” Pitts said. “We believe what happened there was that students who originally chose another option, perhaps community college because of cost, came to Urbana-Champaign because of the Illinois Commitment program.”

He said the University has made considerable progress with diversity within the student body but also has “a lot more work to do.”

“There’s no doubt about that,” Pitts said. “Not only in recruiting and attracting students from underrepresented groups to campus but also making sure that the campus environment is inclusive and open and welcoming to all students (is vital). So this is something that the chancellor has made a priority; it is something that we continue to work on, and we welcome student input on how we can be better in those regards.”

“The University of Illinois at Urbana-Champaign is committed to being a leader in advancing diversity and equity and creating a climate where all can achieve their highest aspirations,” said Chancellor Robert Jones in an email. “We are pleased to see record numbers of underrepresented students and first-generation students in the Class of 2023, because it is evidence that we are living up to our land-grant mission.”