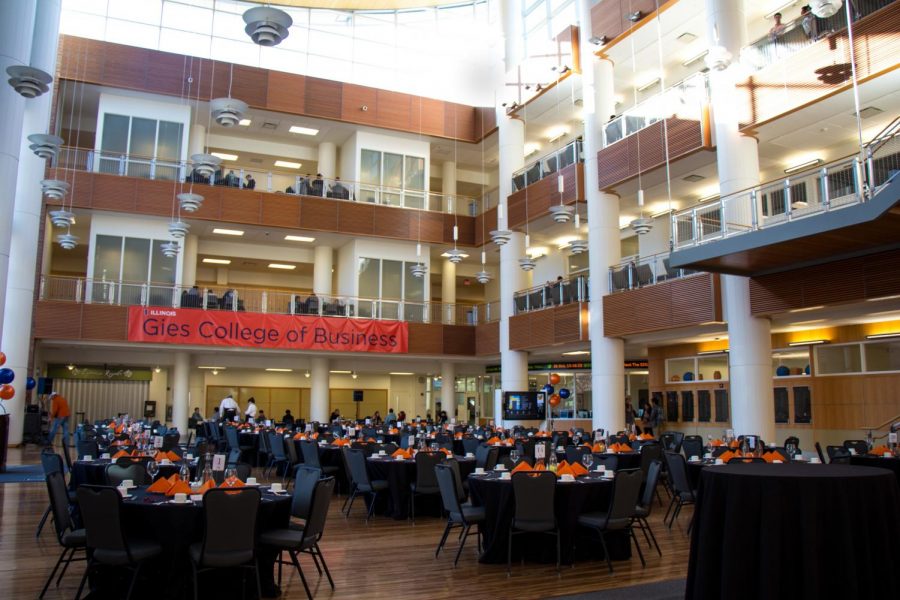 Gies College of Business celebrates the donation from the Gies Family at the Business Instructional Facility on Oct. 26, 2017. Michael Conrad, graduate student in Labor and Employment Relations, points to low unemployment numbers and opportunities in the job market for reassurance about students finding employment upon graduation.

With fears over tariffs, taxes and jobs growing into signs of an economic slowdown after one of the longest periods of growth in American history, University students’ outlooks for the future aren’t as bleak.

The University of Michigan’s Consumer Sentiment Index found its largest monthly decline, at the end of August, in economic confidence since December 2012, which could largely be attributed to consumer anxiety over rising taxes, tariffs and government spending.

Despite these uncertainties, Michael Conrad, graduate student in Labor and Employment Relations, said he believes issues around tariffs, while currently alarming, won’t rile the market forever.

“In (President Donald Trump’s) strategies and rhetoric around tariffs, I think China still has leverage and can outlast us compared to our farmers who are struggling against these tariffs,” Conrad said. “I can’t imagine he’ll go all in and not back down until the economy goes into collapse over a tariff system that’s just a way to flex power over China right now. It shouldn’t be enough to disrupt the entire market.”

Conrad also pointed to low unemployment numbers and opportunities in the job market for reassurance.

“The economy is basically the only thing people are giving Trump props for right now, low unemployment and jobs coming in,” Conrad said. “A lot of them are gig jobs, but it’s better than nothing.”

Ryan Lamare, associate professor in Labor and Employment Relations, had a more pessimistic view of the current and future job market.

“We’ve had a very long period of growth in the job market, but it’s been a bit different from other long-term periods of growth because a lot of it has come from precarious or low-paying work, not the types of jobs that would have been made available in the ideal boom times of the past,” Lamare said. “I do think a downturn is coming because downturns always come up at some point, and we also have more of a chance of a downturn when we have more precarious jobs that can be easily removed from the labor market.”

“If these jobs had a lot of protections around them, either legal protections or protections through unions, it might be a little more difficult to take away those jobs because employers have a lot more opportunities to control the labor market when it looks like things are about to turn the other way.”

Lamare said he is also not prepared to praise Trump on employment growth, something he has used frequently to dispel criticism over many of his policies.

“Trump is taking credit for something that was very clearly on the upswing before he ever took office, which is a big deception,” Lamare said. “The reality is that effect was on the way already from the Obama administration after Bush left office and left a spiraling decline in his wake.”

Lamare said the stats provided to average citizens paint a sunnier picture of unemployment numbers than the reality.

“For instance, the unemployment rate only factors in those who are looking for jobs and failing to find jobs, not taking into account those who are so despondent by the state of the labor market that they’ve just given up completely in even searching for work,” Lamare said. “If you remove that group, the unemployment rate looks really good, but that’s from ignoring a lot of people (who) have decided to not even bother to try, hundreds of thousands of people over this last boom cycle.”

However, Lamare said those who are highly educated and have recently graduated from respected institutions like the University are largely free of worries over employment stability.

“Students are currently pretty optimistic about their likelihood of finding a job, and they should be in the immediate term since they’re to a degree insulated from the precarious jobs that have been made available during this period,” Lamare said. “Not many of our graduates need to take on gig economy work, which is where a lot of job growth has been, for example.”

Andrew Smith, graduate student in Engineering, already has a job offer and said the biggest concern in the future of the growing computer science industry isn’t high unemployment, but high competition.

“There’s growth right now and there’s always going to be a need for tech jobs, so one of the concerns may be an oversaturation in the job market and greater competition since so many people want to be computer scientists,” Smith said. “Right now there’s still a need, but I’m not sure what the field’s going to look like a few years from now.”